Nicholson heats up as Gators split doubleheader with Sonoma State 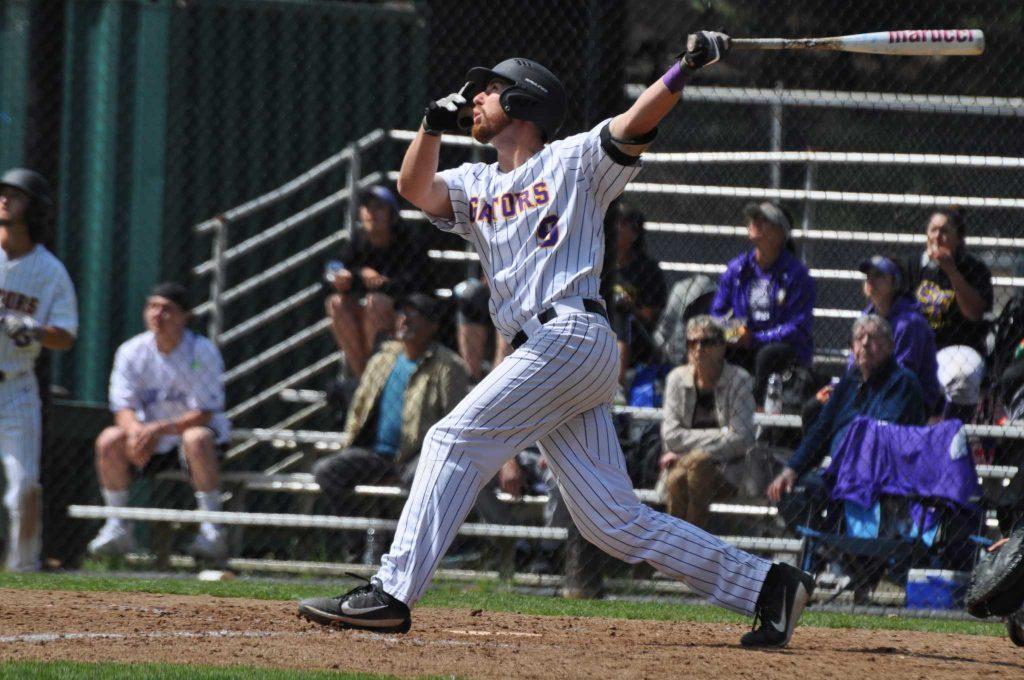 SF State’s baseball team matched its season high for runs in a game, scoring 12 in game one of a doubleheader with Sonoma State University on Wednesday.

The Sonoma State Seawolves jumped out to a quick 3-0 lead in the second inning of game one, chasing Gator starter Jack Cornish from the game. The Gators, however, answered back in the bottom half of the inning, scoring six runs on three hits, two walks and a hit-by-pitch. The big blow in the inning came on first baseman Chris Nicholson’s two-run double over the head of Alex Emerick, the Seawolves’ left fielder.

“I just try to stay balanced and stay within myself in my swing so I can give myself an opportunity to be successful at the plate,” Nicholson said.

The Gators piled on two more runs in the third inning to stretch the lead to 8-3.

“We’re getting in hitter’s counts,” said shortstop Jackson Kritsch about the team’s offensive outbursts as of late. “We’re putting good swings on the ball and we’re getting runners on base.”

After the Seawolves scored two on a home run to left by first baseman Joshua Montelongo, the Gators scored another on a Nicholson RBI single in the bottom of the fifth. The Gators’ first baseman finished game one 2-2 with four RBI, a run scored and a hit-by-pitch. After game one, Nicholson’s production in his previous 10 games played amounted to a .270 average, seven RBI, six runs scored, three doubles and a home run.

“He’s just a good hitter,” Schifano said. “He was, I think, pressing a little bit, trying to do too much earlier in the year.”

“If everybody clicks together, in a game like the first game, they work really well together,” Schifano said. “We don’t really work too well when everyone is trying to be their own guy.”

The Gators scored three more runs over the final four innings while holding the Seawolves to just one hit over the same span. Junior right hander Cole Lang closed out the game with a scoreless ninth inning.

In game two, the Seawolves again struck first with a run on two hits in the top of the first inning, but the Gators scored runs in the first and second innings to take a 2-1 lead.

“I think we let the game get away from us early when we had opportunities,” Schifano said about game two.

The Gators held their 2-1 lead until the fourth when Sonoma State broke the game open. The Seawolves scored eight runs on eight hits, a walk and two errors committed by the Gators to give them a 9-2 lead. Sonoma added one more in the fifth on a Montelongo single to push the lead to 10-2.

In the bottom half of the fifth, the Gators made the game competitive again, scoring five runs to close the lead to 10-7. Nicholson once again did the most damage, doubling home three with the bases loaded. Catcher Dalton Pizzuti singled home a run in the next inning to make it a 10-8 game.

The late rally came up short, however, as the Gators brought the tying run to the plate in the seventh inning of the shortened game but failed to drive it in. The Seawolves held on to beat the Gators 10-8 in seven innings.

“I felt like we kind of let the second game get away from us,” Schifano said. “We had a chance to win.”

“I think today we weren’t really stressed out because it wasn’t conference (play) so we just went out there and swung the bats well,” Kritsch said.

The Gators open a three game series against California State University, San Bernardino with a doubleheader at Maloney Field on Saturday starting at noon.