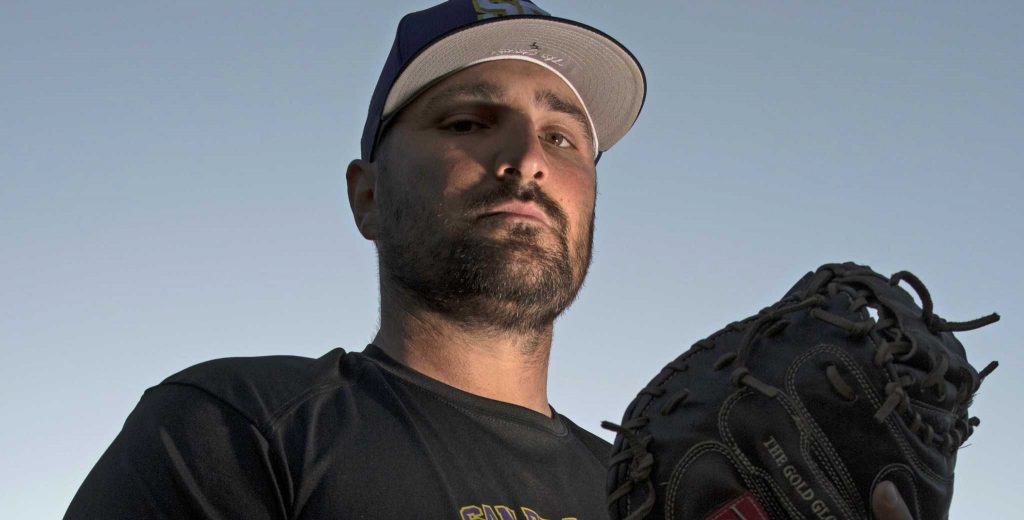 Tyler Latorre, pitching coach of the Gators men's baseball team, poses for a picture at Maloney Field in San Francisco on Wednesday, March 1, 2017. LaTorre is in his second year on the coaching staff of the Gators'. (Lee Kin/Xpress)

As of the beginning of this year’s MLB season, 29 of the league’s 30 teams employ a former professional pitcher as their pitching coach.

The one team to buck this trend, the Milwaukee Brewers, has former Vanderbilt University pitching coach Derek Johnson in charge of its pitchers. Johnson never played professionally, but over his 11-year career at Vanderbilt, he mentored future major league pitchers like David Price of the Red Sox, and the Athletics’ Sonny Gray.

Similar to the Brewers, the SF State baseball team’s coaching staff is outside the norm when it comes to its pitching coach, former catcher Tyler LaTorre.

“I know what the hitter is thinking,” LaTorre said. “So I give a little bit different mindset to my pitchers.”

LaTorre graduated from University of California, Davis, where he had played in 2006, and signed a free agent deal with the San Francisco Giants in the same year. He played in their minor league organization for the following eight years. After playing with the Brewers’ AA team in 2015, he was offered the position of head assistant coach and recruiting coordinator for SF State’s baseball team by current head coach Tony Schifano.

“I just felt like it was the right time for me to get into coaching,” LaTorre said.

“We play at a big field — Maloney field is a big, big field,” LaTorre said. “We pitch to contact now.”

Because of the spacious dimensions of Maloney Field, the Gators’ home field, the pitch-to-contact method has become a hallmark of the pitching staff.

“LaTorre has been a great pitching coach,” Najeeb-Brush said. “Not only does he help with the physical technique of pitching but he’s also helped a lot with the mental aspect of it.”

Despite his title, LaTorre does much more than just work with pitchers. He works with the team’s catcher core on their catching, blocking and receiving techniques as well as their hitting.

“Nine years in pro organizations, you start to learn the game a lot better and there’s a reason why catchers are usually managers,” Pizzuti said.

The catcher said LaTorre has helped him with a lot as a mentor for the past two years, teaching him how to think things through.

“Dalton Pizzuti is a senior that’s been here for four years that has a really good arm,” LaTorre said. “I’ve been working with him to really get confident and being able to know that if that guy runs, he’s out.”

Pizzuti and Najeeb-Brush both agreed LaTorre has used his skill set to help the pitching and catching staffs sync up.

“This entire spring and this journey that we’ve gone through has definitely helped,” Najeeb-Brush said. “Every game we go through, every practice that we have, we’re able to learn each other better and I feel like the chemistry is definitely building.”

Despite the number of former pitchers that have become pitching coaches at the major league level, becoming a pitching coach as a former catcher is not completely unheard of. Dave Duncan, widely regarded as one of the best pitching coaches ever, played 11 major league seasons as catcher for the Athletics, the Cleveland Indians and the Baltimore Orioles.

LaTorre may not have the resume of an all-time great like Duncan, but he still uses the knowledge he’s gained on both sides of the ball.

“I’m a student of the game and I like to think of myself knowing more about the game than anybody else,” LaTorre said. “I listened to pitching coaches like Dave Righetti with the Giants and my pitching coach at UC Davis Matt Vaughn.”

LaTorre noted the baseball team’s goal of being what he called a “pressure team.”

He felt the goal of putting pressure on the other team gives the Gators a bright future.