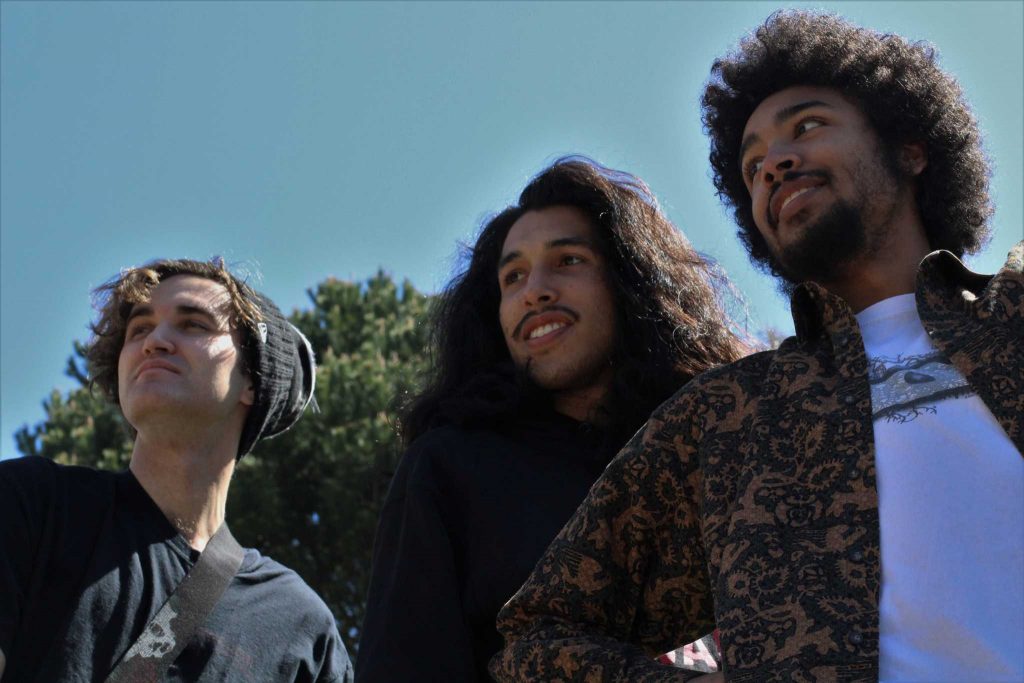 (Left to right) Dax Mcfarlane, Christian Arriola and Tyler Wood are the members of the band Phlogiston at SF State on April 4, 2017 in San Francisco, Calif. (Alina Castillo/Xpress)

Wood, guitarist and singer, started the band Phlogiston as a passion project playing Tool covers. He rekindled a friendship with bassist Mcfarlane when recruiting band members a year into college. The two had previously bonded over music at SF State orientation.

“At the time, I was looking for people to jam with because I wanted to start a cover band playing Tool songs,” Wood said. “He and I started talking again and I remembered that he was also a Tool fan, so I asked him if he was interested in jamming, and he was.”

Arriola joined and completed the trio as their drummer. Soon after, the group dropped the cover-band idea due to difficulty booking shows, and began creating their own music.

“The cover thing wasn’t panning out so we tried writing some originals and, lo and behold, we came up with some decent tunes and booked our first gig about eight months later,” Mcfarlane said.

The musicians perform under the name Phlogiston, which represents the substance once thought to be the cause of combustion, according to Wood.

“This was of course disproven, but I thought it was a pretty cool concept so I decided it was a cool band name,” Wood said.

Although the band has loosely recorded songs, they are currently working on recording their music   professionally in the Creative Arts studios used for Mcfarlane’s audio class.

“We plan to go back in … to do overdubbing and mixing so we can release the tracks as soon as possible,” Wood said.

The band had the recent opportunity to perform live for listeners on the KSFS Radio segment “Music Under the Stairs.”

“We plan to play on the show again later this semester” Mcfarlane said.

The band members enjoy playing live because they get to truly become themselves. In Mcfarlane’s case, he releases all feelings of insecurity.

“I have yet to find something that can make me feel as content as performing live,” Mcfarlane said. “The best way to put is I experience a lack of any insecurity, and feel completely in my element.”

Drummer Arriola appreciates being able to share himself and let the audience feel what he is experiencing while he performs.

“To expose the core of who I am to others and have them react positively to it is really a beautiful experience,” Arriola said. “This experience grows even more when I perform with Dax and Tyler.”

Arriola wants to hear the band’s sound evolve and see its fan base grow.

“My hopes for Phlogiston are that we, as a band, push our musicianship further and refine our craft while receiving positive feedback from listeners,” Arriola said.

In addition to recording new music, playing live is something the band hopes to do more. In the near future, they would like to play at The Depot, SF State’s music venue.

“We would like to play wherever we can, to be honest,” Wood said. “We just really want to get our name out there and develop a following.”