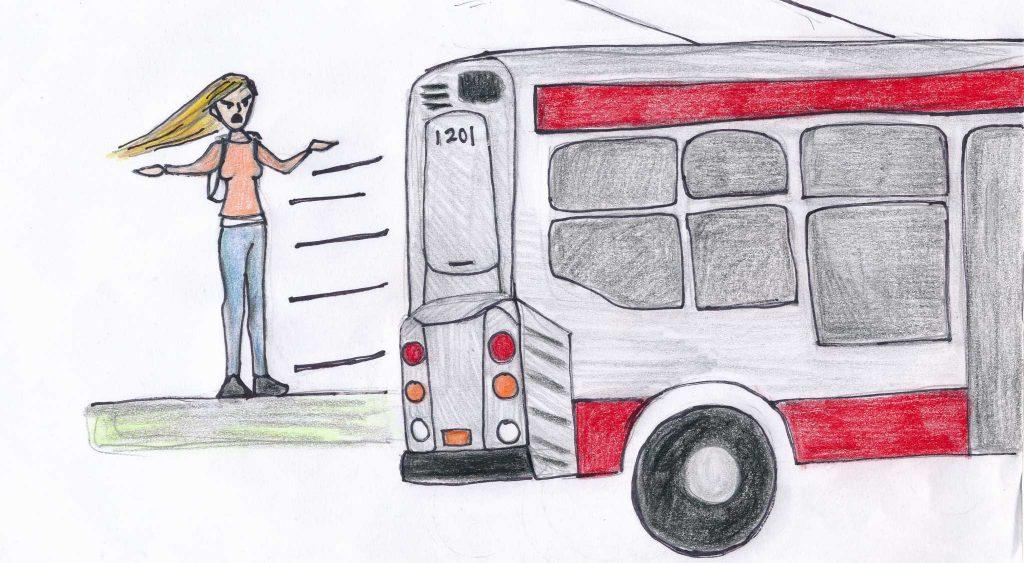 I was recently standing on the corner of 45th Street and Sloat Avenue in the unusually warm San Francisco air -— with small beads of sweat forming on the back of my neck and around 15 pounds of camera equipment in tow. I was patiently waiting for the 57 bus when it completely drove past me. I was furious. How could the Muni bus driver decline to make the stop and pick me up, when I was quite visible standing on the curb, clearly waiting for the bus?

This is where my feud with the Muni transit began, as the next bus wouldn’t reach my stop for another 34 minutes. I resigned myself to the situation and put down my shoulder-crunching backpack, leaned against my tripod case and got to pondering the entire matter. My irritation led me to the following conclusion: Muni needs improvement in many areas and should provide more reliable service.

Sfist quoted Dave Snyder, a member of the San Francisco Transit Riders Union, who told the San Francisco Examiner in 2011 — “There are (transit) agencies all over the world that have more passengers and that ride on street level and have a much better on-time performance rate than Muni.”

I can certainly attest to this. Traveling throughout New York and Paris made me realize how lame and spotty public transportation in San Francisco can be. The New York Metro, the Paris Metro, and the bus schedules in both Manhattan and Paris ran smoothly and regularly, and never missed a stop or a passenger.

If the Muni’s bus and metro system wants to become as coveted and wonderful as transportation systems in Manhattan and Paris (or at least better than the mess that is BART), then in my opinion they will have to address two different things: reliability and timeliness.

Reliability carries the utmost importance, considering that a delayed Muni bus, or one that passes you completely, can make you late to work or school. I’m taking Muni for a reason. I don’t want to shell out my money for an Uber every time I need to get somewhere on time, or even early. However, with an unreliable Muni I find myself hiring a car service more often.

According to the 2016 San Francisco Municipal Transportation Authority Annual Report, the department has increased its Muni service by 10 percent, yet the 28 and 57 buses frequently pass me by, fueling this frustrated sense of unreliability.

If Muni has increased its services, then why I am still left out on the curb, quite literally? Failing to pick up passengers, known as “pass-ups” on the SFMTA blog, can occur for several reasons. A bus might pass you by because it’s over loaded or ordered to skip a stop in order to balance service — or it may be out of service and not correctly labeled as such.

These valid reasons are also the root of the problem. Perhaps the agency should consider designing larger buses that can hold more people, or when a bus is out of service, the driver can double check to make sure the bus does indeed say, “out of service.”

Even though the bus missed me that one sunny and windy day, I might not have been as upset if the next one hadn’t been delayed for more than a half-hour.

As reported by SFGate, a City Controller’s Audit report found that in 2015 the Muni was either late or early 56 percent of the time. Basically, there is a 50 percent chance the Muni will either arrive on time or late, but who knows? The odds are 50-50. Frankly, that is ridiculous. What if you’re rushing to a job interview?

Instead of working on installing hundreds of bicycle racks, or trying to test out the concept of raised-platform bikeways (plans stipulated in the 2016 Annual Report), the SFMTA should work on investing their time and money into making sure Muni buses consistently arrive on time.

In addition, maybe Muni could invest in making sure its buses are actually clean, rather than  settle for the smell of old sweaty feet dipped in a vat of garlic. But that is the least of my worries and a story for another day. For now I’ll just worry about reaching my final destination.