When white feminism meets the appropriation of marginalized activism 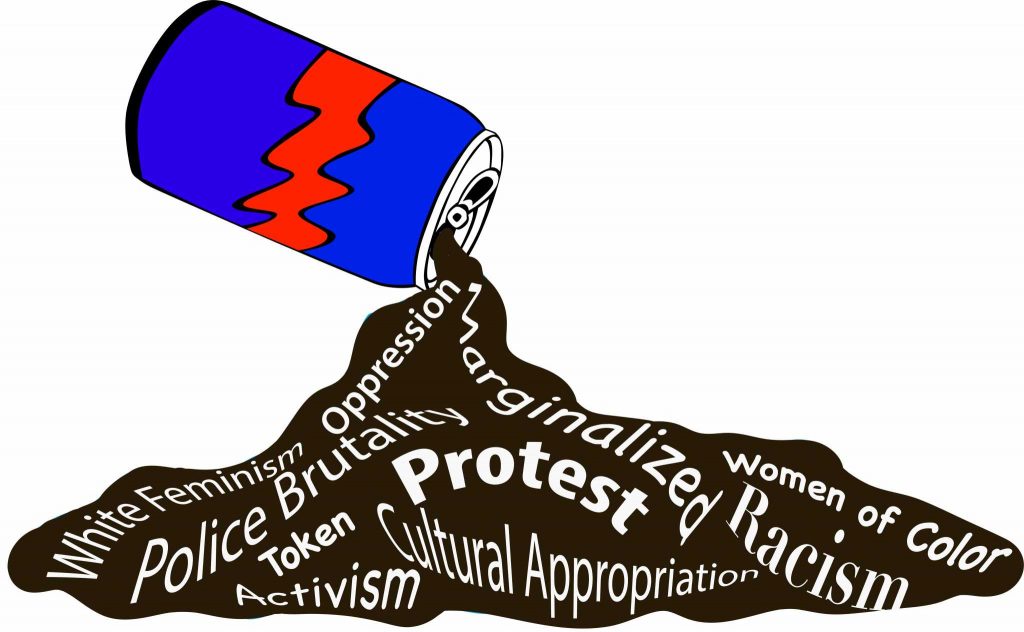 Racism is dead. All is good in the world and we are all one big happy family. At least according to PepsiCo Inc.’s latest commercial.

For anyone who has yet to see the commercial, Kendall Jenner leaves the comfort of her modeling pedestal to join a group of protestors surrounded by police officers who seem close to erupting into a riot.

That is until Kendall uses a can of Pepsi as a peace offering and then all is right with the world. Racism no longer exists, police brutality can be halted with an ice-cold can of Pepsi, and life is a beautiful all-inclusive party.

Many of us understand why Pepsi’s newest commercial was problematic. It has since been removed and according to PepsiCo’s statement all further work connected to the latest commercial has ceased. But not before people took to Twitter to criticize Pepsi and Kendall.

Even Bernice King, Martin Luther King Jr.’s daughter, took to Twitter to address the commercial simply tweeting, “If only Daddy would have known about the power of #Pepsi,” along with a photo of her father facing armed officers while linking arms with protesters.

Kendall being chosen for the commercial is in itself an issue because of her family’s appropriation of black culture and consistent backlash for appropriating a variety of other cultures.

One of the many things that jumped out at me as I watched the commercial, aside from the blatant trivializing of #blacklivesmatter and making light of the current political energy, was the marriage of white feminism and the appropriation of marginalized activism.

White feminism remains at the surface of the fight against institutions oppressing marginalized groups. As the term states, this feminism solely benefits white women.

This is a simple example of how white feminism focuses on only issues white women face, while erasing the issues that women of color face.

The term white feminism has recently been used more often by those who feel the current state of feminism lacks intersectionality. However, the practice of secluding certain groups under the veil of feminism has been prevalent since the early 1920s.

During women’s suffrage, Elizabeth Cady Stanton and Susan B. Anthony fought for the women’s right to vote and equality for women.

At least that is what is taught in most history classes. In fact, Susan B. Anthony only wanted the issues of white, upper and middle-class women to be addressed.

She was famously quoted saying, “I will cut off this right arm of mine before I will ever work or demand the ballot for the Negro and not the woman.”

And yet she is seen as one of the mothers of women’s rights, when black women suffragists were more often at the forefront of the women’s movement.

What history has done time and time again is erase women of color and their activism, and instead ensure that women like Susan B. Anthony and Elizabeth Cady Stanton are the faces of early feminism.

This can also be noted in Pepsi’s commercial. When Kendall hands the police officer the Pepsi can, there is a striking resemblance of the famous photo, “Taking a Stand in Baton Rouge,” that shows Ieshia Evans, a young black woman in a dress standing firm against approaching riot police.

The Pepsi commercial gave a white face to the protests that have been happening all over this country in response to wrongful and unjust deaths.

Although Pepsi claims the initial inspiration for the commercial was from a photo in the ‘60s of a woman approaching police with a flower and not the Baton Rouge photo, the resemblance is still apparent.

After the backlash, PepsiCo Inc. released an apology explaining it was “trying to project a global message of unity, peace and understanding.”

However, Pepsi could have made a commercial that did just that without trivializing the #blacklivesmatter movement and downplaying the severity of police brutality, as well as giving white feminism a platform and advancing the appropriation of marginalized activism.