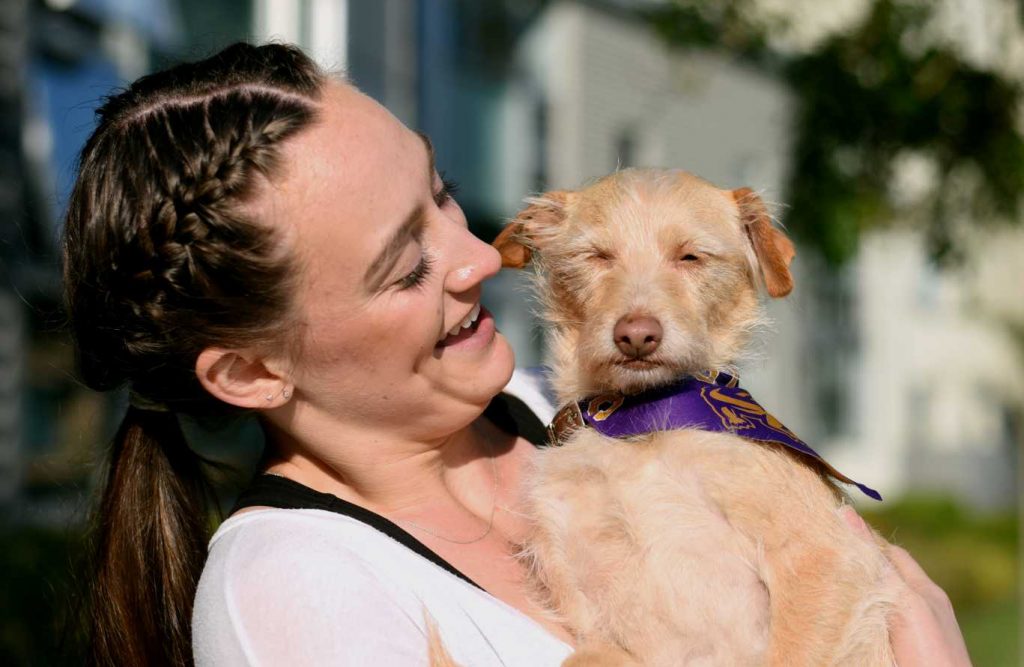 Ali Simonson, a freshman from San Diego, poses with her dog of 3 years, Bella, outside of her dorm at the Village at Centennial Square on Sunday, April 9, 2017 (Lauren Hanussak/Xpress).

Corrections: A previous version of the article mistakenly stated that ESA’s are covered by Americans with Disabilities Act, and that Dr. Cynthia Kay Chandler was at the University of Texas.

A new policy began this semester that prevents Student Health Services therapists and doctors from writing letters of support for students in need of emotional support animals. Doctors are still allowed to prescribe psychotropic medication, just not animals.

The new policy will refer students to off-campus health care when an emotional support animal would be beneficial to their emotional care.

Emotional support animals are proven to be effective in providing support and companionship for those suffering from mental and emotional conditions. Like service dogs, ESA’s are covered by the Fair Housing Act.

Renters, including University dormitories, are mandated to make reasonable accommodation for the individual and animal – all that is required is a letter from a therapist or medical specialist that asserts a need for an ESA. Unlike service dogs, ESA’s are not required to be trained to perform a specific task.

Eugene R. Chelberg, Student Affairs associate vice president, said that for a long time it was left up to the judgment of individual Student Health Service’s doctors to prescribe ESA letters. However, it became an official policy this semester to not provide this service to students.

“The level of care and type of relationship a patient needs to have with a provider to support and understand fully the impact of an emotional support animal is beyond the general practice of the student health (center),” said Chelberg, who also clarified that SF State’s psychological and health services are funded to provide limited, basic, short-term care.

Although doctors at Student Health Services are no longer able to provide letters for ESA’s, doctors are still able to prescribe the full range of psychiatric medications including antidepressants, atypical antipsychotics and mood stabilizers.

“If you happen to have an assessment and a diagnosis to recommend medication, then that same assessment (or) diagnosis can be used to recommend a therapy dog,” said Dr. Cynthia Kay Chandler, a professor at the University of North Texas and author of the book “Animal Assisted Therapy in Counseling.” “Metaphorically, a dog is a prescription, so (to prescribe one and not the other) doesn’t make any sense at all … that’s just ridiculous.”

Making sure students have adequate mental and emotional resources is vital.

“Allowing a student with disabilities to keep an assistance animal is not only required by law, it can mean the difference between having the opportunity to attend college or not,” said Gustavo Velasquez, U.S. Department of Housing and Urban Development’s  former assistant secretary for Fair Housing and Equal Opportunity in a press release for the United States Department of Justice.

Gustavo was referring to a case in which the University of Nebraska denied students with psychological disabilities their right to have assistant animals in student housing.

The data collected on students’ psychological health by these organizations reassures the importance of services available to help students when they are struggling emotionally and psychologically. According to the National Alliance of Mental Illness, 75 percent of lifetime cases of mental illness start by age 24 and can manifest differently in new environments with new forms of stress. Medications that worked before at home or in high school, don’t always work at university, or can have different effects.

Attending college can be a stressful, unfamiliar and lonely environment, where many students are experiencing living apart from their family and established a support network for the first time.

Ali Simonson, an SF State freshman who lives in the Village at Centennial Square with her emotional support dog, Bella, says her first year of college would have been different without her dog and that Bella made her transition to school easier.

“(Bella) definitely made a good welcome for me to come to the University,” Simonson said.

Simonson said that her transition to college would have been more stressful and she would not know as many people if not for Bella, who has helped her interact with the campus community more.

“I would definitely be more lonely,” Simonson said.

Dr. Chandler said that for patients dealing with depression and anxiety, having an emotional support animal helps lower cortisol levels besides having the ability to calm the individual and reduce anxiety.

“Medication, as helpful it is, also has side effects which are toxic to the body,” she said. “Anything that we can do that it’s more natural and proven by science, like having an emotional support animal, a dog or a cat live with you…seems like it would be so much better for the person.”

Simonson is taking anti-axiety and antidepressant medication and notices that having Bella benefits the days where she is not able to take her medicine.

“Knowing that I have to take care of her, so it gets me up and going on walks at least three times a day,” Simonson said. “It definitely helps to get outside and get fresh air.”

“Exercise like walking, is the most effective treatment for depression, not medication.” said Dr. Chandler who also said that walking is the first step to take when treating depression. “That is proven in the (medical) literature.”

Accommodating emotional support animals in the dorm is a straightforward process when requested before the student moves into the dorm.

“From time to time,” Chelberg said. “We don’t get a request until after the animal has moved into the property and that becomes a challenge for the University to respond in a timely manner and also potentially for the roommates.”

Some students have animal allergies and the University needs to work on relocating what can sometimes be multiple students, Chelberg said.

Although the new policy makes it harder for some students who don’t have or aren’t near their primary care physician, this policy does not violate any law. The University complies with the Fair Housing Act and Americans with Disability Act by accepting students with letters for animals in the dorms, and clinics are allowed to choose not to offer particular services as they see fit.

“As such, neither (SF State’s Counseling & Psychological Services or Student Health Services) provides this type of documentation,” Chelberg said. “Students needing documentation are referred to off-campus providers for longer-term treatment and care.”

In San Francisco, seeing a professional who can write a letter for an ESA can cost more than $100 for each visit.

Simonson is fortunate to be able to see her doctor in Southern California, but other students are not so fortunate and rely on the Student Health Center on campus for a more accessible and affordable option.