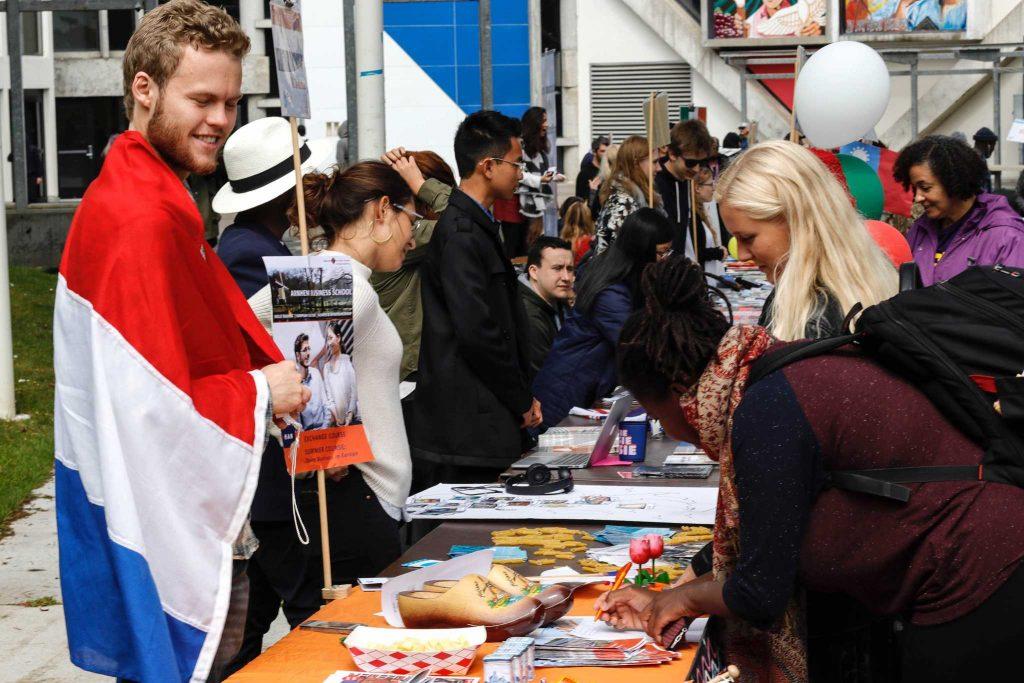 Exchange student and artificial intelligence major Sierk Kanis, 23, talks with two students about the Netherlands at the Study Abroad event held in the quad outside Cesar Chavez Center at SF State on April 12, 2017, in San Francisco, Calif. (Mason Rockfellow/Xpress)

SF State’s annual Study Abroad Fair was held in the quad on Tuesday and Wednesday to highlight different countries students have the opportunity to study in as a part of their degree.

The two-day event gave students a chance to talk with their international peers about their home countries and ask questions about what college is like outside of the Unites States.

“It’s a great way to advertise the fact that we do offer these programs at SF State,” said Ayesha Midha, president of the International Education Exchange Council. “It’s students talking to other students and giving more realistic information than any advisors or websites can give.”

students have already been accepted to study abroad next semester including Melissa Herold, who will be studying design in Melbourne, Australia.

The 21-year-old has dreamt of studying abroad since middle school and was encouraged by her family, especially her grandma, to travel as much as possible.

“I think the biggest challenge will be being so far away from my family,” Herold said. “I am really close to my mom and I’m going to miss her so much, but that will make coming home more special.”

Breanna Manore knows first-hand what it’s like to move across the world to a foreign country after spending a semester living in the Netherlands.

After attending a study abroad fair two years ago, Manore was inspired to become an exchange student and leave the comforts of her home in the U.S. to experience a new culture.

“People who haven’t even thought of studying abroad come and they see the fair going on and they are like ‘oh I wanna go abroad,’ and then you get them to come to a meeting and go from there,” Manore said.

Once returning to San Francisco, the communications studies major has remained involved with the IEEC as treasurer and continues to support students interested in going on exchange in the future.

Come July, Tony Ortiz will officially be an American exchange student when he moves to Tübingen, Baden-Württemberg for a year to study at the University of Tübingen in Germany.

The sociology major is looking forward to travelling around Europe when he is not studying and catching up with people he has met through SF State’s exchange program.

“I’ve met a lot of people from IEEC these past two semesters who have all invited me to stay with them, which I’m really excited about,” Ortiz said.

Kutchins believes exchange is so popular among SF State students because it is an affordable and accessible experience.

“People usually consider study abroad to be very expensive, something they can’t afford but they find out here through an exchange module we have, they will probably pay less on an overseas experience where they spend a semester abroad than they would in San Francisco,” Kutchins said.

“No matter what they study, there is a study abroad program available and the amount of locations and partner universities we have, appeals to a lot of people.”