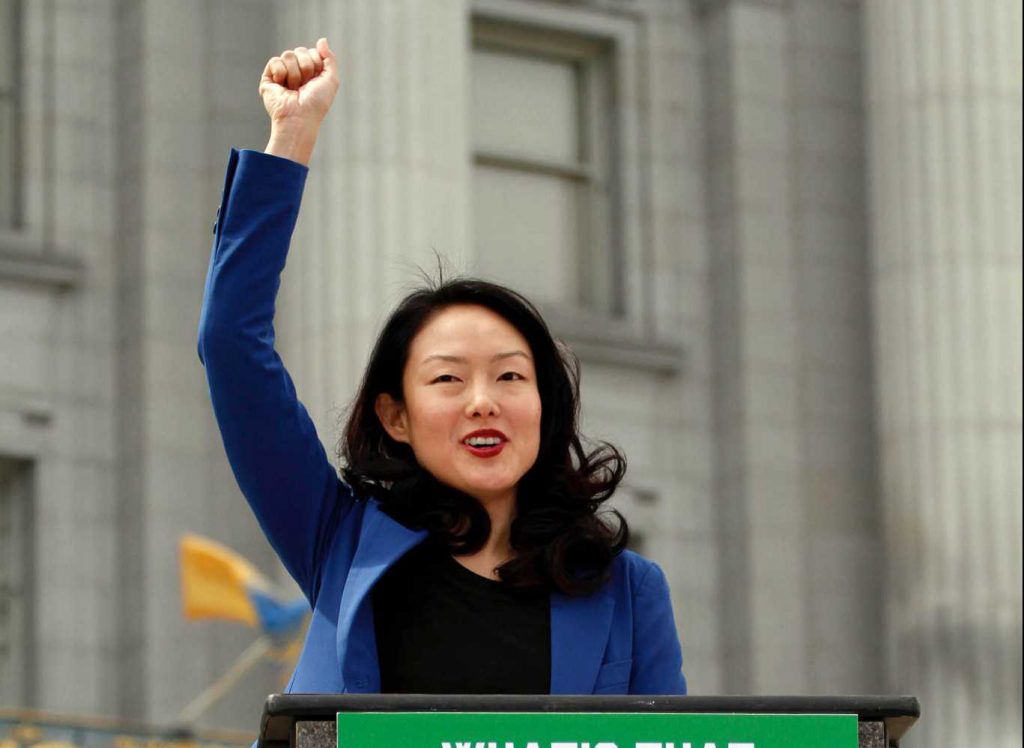 Supervisor Jane Kim speaks during the Tax March against Trump and him not releasing his tax statements on April 15, 2017, in San Francisco, Calif. (Mason Rockfellow/Xpress).

Presidents are not required by law to release their tax returns, but each has done so voluntarily since the early ‘70s.

Trump has refused to release his tax returns, first citing an on-going federal audit as a reason and later saying that his voters don’t show interest in whether he releases them or not.

Holly Dowling, 59, came to the march with her husband in hopes their activism will inspire others to speak up. Holly and her husband both feel that Trump has broken the rules by not releasing his tax returns.

“I think he has something to hide, and that there are influences on him, maybe he has broken some rules and taken liberties with his tax returns,” Dowling said. “We feel it’s important to take a stand – our presence here will help the cause of reminding people that Trump is not a good thing for our country.”

Danelle Morton, Tax March spokesperson, hopes  this event will show although that these next four years will be long the public has the power to make change. Aside from the grim and angry protests she believes that having a little bit of fun along the way is essential.

“He’s the first presidential candidate to hesitate to release his taxes, and because of his many financial dealings in all these different countries, it’s not clear how he’s benefiting from deals he’s made,” Morton said. “It’s blind trust.”

“We’re not under any illusion that he’s going to see people marching in the streets and decide to release his taxes, what we want is to make sure that Congress knows that people are concerned and hopefully they will press him to subpoena his taxes,” Morton said. “Congress needs to make this happen.”

San Francisco Supervisor Jane Kim also spoke at the march and stressed that although the president’s tax returns is an important issue, we must look at the bigger picture. Kim expressed that the rich should be held accountable for the country’s wealth gap and growing income.

“We, the American people, want to know, was our president honest?” she said.