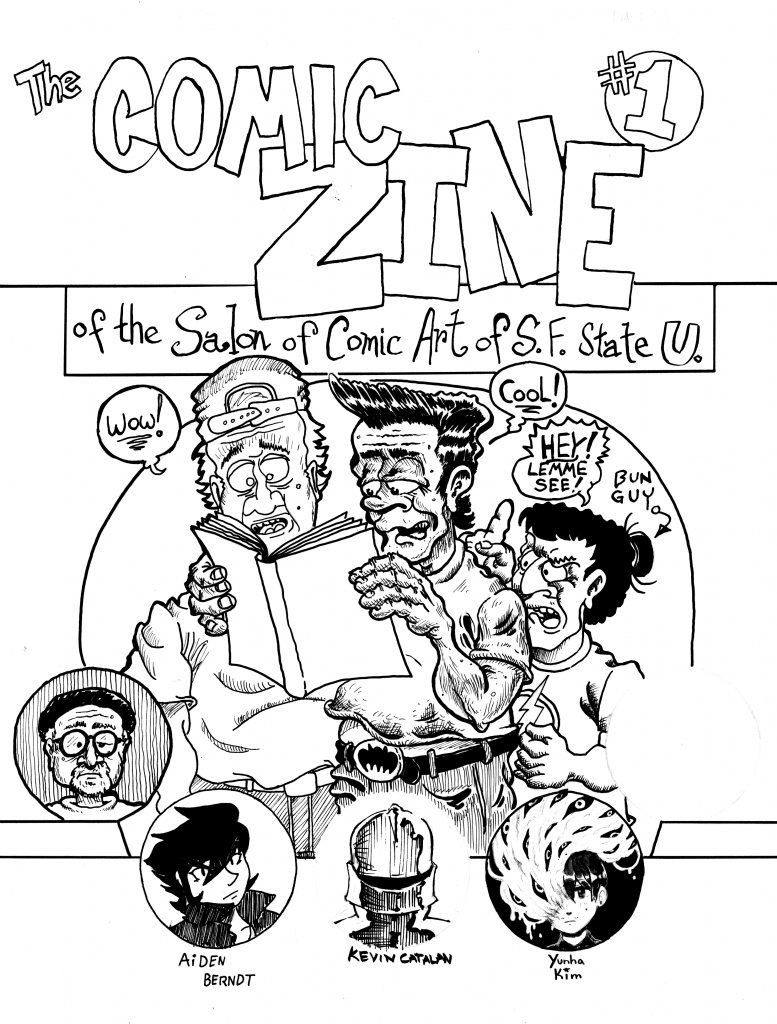 Artwork courtesy of the Salon of Comic and Cartoon Art.

The Salon of Comic and Cartoon Art recently achieved official recognition as a student organization at San Francisco State University in fall of 2016.

Working in facilities at SF State, tattooed and bespectacled Salon founder Jonny Pogorelskin, a retired cartoonist for the popular ‘80s and ‘90s hot-rod magazine “Car-Toons,” and long-time collaborator with cartoonist Ed “Big Daddy” Roth — creator of the popular “Rat Fink” cartoon — originally had the idea for the club while changing lofty light-bulbs and fixing campus locks during his daily rounds.

According to the SF State website, any student organization wishing to achieve University recognition must have a minimum of five enrolled students, including a president, a treasurer and an adviser. Pogorelskin wanted to get the word out fast, and chose a grassroots approach to advertising.

“I decided, you know what — I work at a university! I’m in the perfect community, so I put up fliers all over the whole campus,” Pogorelskin said. “I’ve got a lot of knowledge, you know — I’ve been at it a long time and I wanted to mentor young people about comics and cartooning.”

Yunha Kim, now the Salon’s president, was the first enthusiastic young artist to rip off a tab containing Pogorelskin’s email address and respond to the old-school bulletin.

“I first transferred here last semester and I saw Jon’s flier,” Kim said. “At that point I hadn’t seen any art clubs on campus, and I wanted to join one, so I actually ended up being the first one to email him. Then Kevin (Catalan) got involved, and it just kind of grew organically from there.”

The 20-year-old marketing major is enthusiastic about the Salon’s growth and development and has high hopes for the club’s future. Kim looks forward to printing the Salon’s new zine, which is a compilation of art, comics, stories, cartoons, poetry and ideas from each of the Salon’s  24 members.

“Our main goal of spreading this new zine and distributing it is partnering with some local comic shops or even with the SFSU library,” Kim said. “But our big, huge goal is going to the Alternative Press Expo — a show that debuts a bunch of independent artists’ zines once a year.”

As treasurer for the Salon, Kevin Catalan is responsible for the club’s annual $500 surplus, distributed through Associated Students Inc. The 20-year-old Batman fan says while some of the funds might pay for supplies, the bulk will go toward printing the new zine, which he hopes to have by summer. He says the Salon acquired quite a few new members since becoming officially recognized by the University, so they stretched the zine’s submission deadline in order to include late work from newly arriving members.

Catalan urges people to value the work that goes into cartooning and says his main goal for the Salon and the distribution of the new zine is to destigmatize the cartoon medium and prove comics are not just for kids.

SF State sophomore and Salon member Sammie Kim grew up reading Manga — the ubiquitous Japanese comics that incorporate an expansive array of topics like horror, science fiction, comedy, and sports, and features vibrant characters with beautiful, larger-than-life eyes. Manga inspired Kim to draw at an early age and the young cartoonist was ecstatic when she found the Salon of Comic and Cartoon Art.

“I just really love making and reading comics,” Kim said. “So being a part of something that helps make both of those interests a reality is just a dream come true.”

The 20-year-old creative writing major says she’s really into comics like “Kimetsu no Yaiba,” and says her biggest  influences are Rebecca Sugar and Meredith Gran.

Kim contributed a four-page comic to the Salon’s new zine. She’s been developing an Asian-American super-hero character for the last five years, and couldn’t be more  excited to see her very own cartoon finally come to life.

“I think the main goal of the zine is just to showcase what we as a club are capable of, as well as encourage people to join,” Kim said. “The zine we are publishing is the first of its kind for the club, so we’re all very excited to see it printed and distributed.”

Pogorelskin couldn’t be more excited now that the Salon has official recognition and funding from the University, and he’s ecstatic he gets to combine his love of comics and cartooning with his love for teaching and passing along his knowledge.