“A Midsummer Night’s Dream” gets a makeover in student production 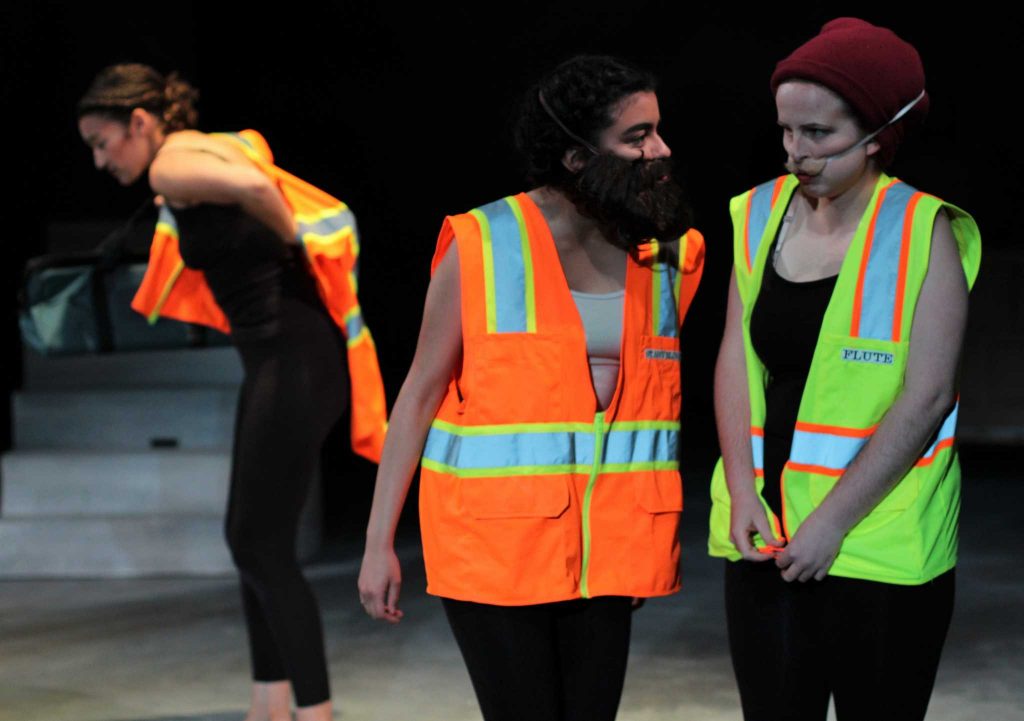 The SF State cast of A Midsummer Night's Dream on stage of dress rehearsal on April 12, 2017 in San Francisco, Calif. (Alina Castillo/Xpress)

Eight students took on the roles of 24 major characters in SF State’s School of Theatre and Dance’s production of Shakespeare’s “Midsummer Night’s Dream.” With an added plot twist of their own, the cast entertained a crowd of students, friends and family in eight different shows.

The actors were asked to portray several different characters in various styles during auditions to gauge their versatility, according to Kurt Daw, theatre arts professor and director of the play. The chosen actors were cast without parts and asked to attend workshops to see which character roles fit best.

“We cast four men and four women and invited them in and said, ‘Now what are we going to do?’” Daw said.

According to Daw, the department experimented with casting multiple roles to actors in the past, but never to this extent.

Daw said one of the reasons behind the decision was to create a more historically accurate performance of Shakespeare, in which actors were commonly cast to play multiple roles.

Mya Smoot, a senior at SF State and theatre major who played Helena, Quince, Prologue and a fairy, said she was excited to be playing multiple characters because it gave the actors an opportunity to branch out from roles they are commonly typecast as.

“I think in this play we were initially cast as our main character, but then the other ones aren’t as obvious to our character type,” Smoot said. “It’s fun to transform into those roles that we don’t normally get to play.”

Hannah Keller, a senior at SF State and theatre major who played Lysandra, Snug, Lion and a fairy, said having multiple roles has helped the cast understand the play on a deeper level.

“There are three worlds, and being able to play a character in each world allows us to really delve in and get to know the entire play as a whole,” Keller said.

Shakespeare’s “Midsummer Night’s Dream,” primarily known as a comedy, is much more than that, according to Daw.

“Through most of history people have been really interested in ‘Midsummer Night’s Dream’ as kind of a pretty spectacle with cute little faeries in little Victorian tutus,” Daw said . “I think that we take the play a lot more seriously.”

Keller said they wanted to take the play up a notch and address issues more current to what is happening in the world today. To do so, they made a character change.

The original plot centers around a woman, Hermia, who is forbidden by her father to marry the man she loves, Lysander. Daw said Keller felt there needed to be a reason behind Hermia’s father’s decision. This led them to cast the two main lovers as women.

“I feel any audience, no matter what time period, can relate to Shakespeare,” said Keller. “But we are also giving it this extra level by adding an issue into it that people see every day, especially walking along the streets of San Francisco.”

Smoot agreed on the importance of the change, particularly because the topic of LGBTQ+ rights is still a political issue.

“I think that we thought, maybe even two years ago, that this issue was resolved,” said Smoot. “I think that theater needs to reflect what is happening.”