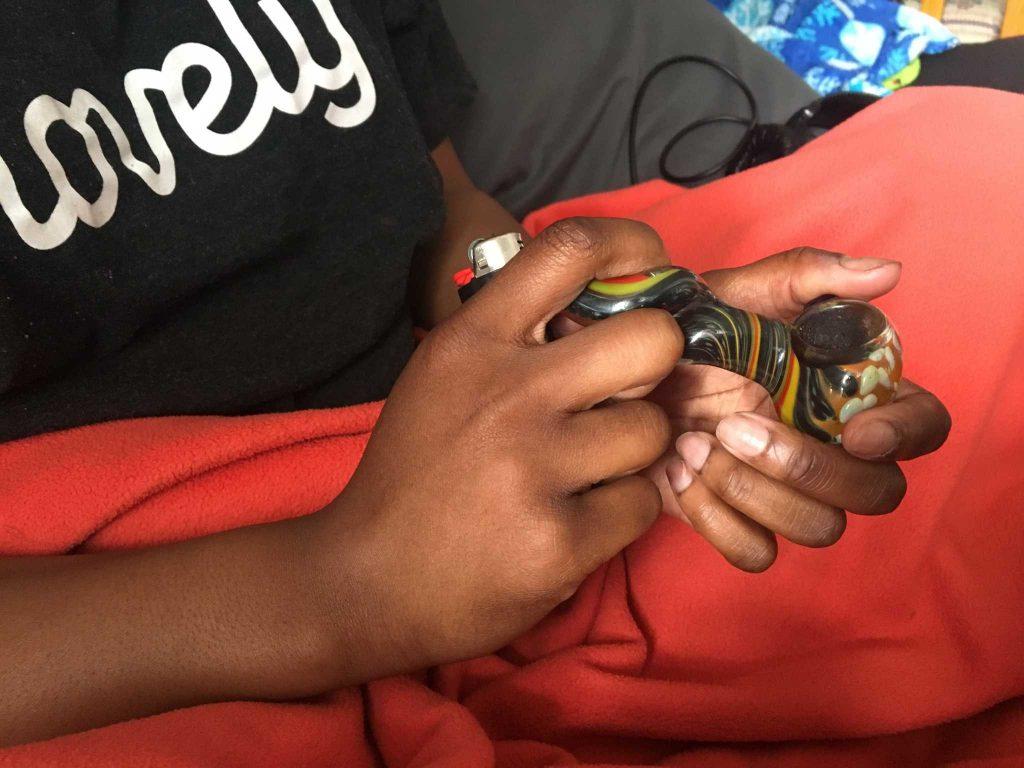 Correction: A previous version of the article incorrectly stated that Eaze doesn’t plan on making its service available for recreational users at all, and that Miller directly drove for Eaze.
San Francisco has a history of celebrating the unofficial “420” holiday, but Thursday marks the first celebration since California became the fifth state to legalize recreational use.

California voters passed Proposition 64 on the Nov. 8 ballot and although it was not the first state to do so, it was first to legalize marijuana for medicinal use 20 years ago.

Since then, it has become significantly easier to get a medical card. Cheyenne Liddicote, a 23-year-old environmental science major and self-described “stoner,” got her card in October after a Skype interview with a doctor.

Eaze, a medical marijuana delivery app similar to Postmates and Grubhub, offers a menu of cannabis products to people with the required documentation. It also offers a separate app, Eaze MD, which people can use to obtain a medical marijuana card. For $29 a user can immediately video call a doctor who will give issue them a card and allow them to “start shopping with Eaze immediately.”

Her friend and coworker, 22-year-old Shaunta Miller, drives part-time, in addition to having another job and taking three classes at San Francisco City College. She says a standard shift is 3 p.m. to midnight and during that time, she is delivering nonstop. Though her clientele is diverse, she frequently delivers to college students in Park Merced.

“There aren’t really any dispensaries in that area so I think they like the luxury of ordering from an app,” Miller said.

Easy access to marijuana has made areas such as Dolores Park and Hippie Hill havens for smokers, particularly for 420. Liddicotte describes 420 as “just another weekday”, but also believes there will be a higher turnout for the holiday now that marijuana has been legalized.

“I think there will be a lot of people who couldn’t participate before because of their jobs or people who didn’t want their family to know they smoked because it was illegal,” Liddicotte said.

The passing of Proposition 64 also allows 420 to become a city-permitted event. In the past, the city couldn’t do anything except ignore it and clean up the mess afterwards, which usually cost around $50,000, according to CBS.

The website dedicated to the event says that 11 tons of trash was left behind on Hippie Hill after last year’s 420 celebration. In response, several brands and businesses are sponsoring this event to provide more amenities. These brands include Cookies Clothing, Diamond Supply Co and High Times Magazine, among several others.

The website says increased security measures will include monitored entrances to the event area, a ban on attendees younger than 18 and a fence enclosing the venue so attendees “can be monitored to ensure compliance.”

The website also provides a list of items attendees are prohibited from bringing in, such as glass, barbecues or amplified sound systems.

One of the sponsors and organizers working with the Parks and Recreation department is Alex Aquino, a resident of Haight and owner of the local business Black Scale. He saw a need for infrastructure within the event when he realized how harshly it impacted the parks and surrounding block in Upper Haight.

“We don’t want them to stop it or take it out of the city, so we fixed it,” Aquino said.

Though the proposition is allowing 420 to be a safer, cleaner event, several long-time smokers, including Liddicote and Miller, have issues with it.

Proposition 64 technically makes marijuana legal for California residents 21 or older, but a lot of dispensaries won’t be selling their products recreationally until 2018.

“As of right now, it’s more medical because when they roll out the recreational aspect of the dispensaries, it’s going to be taxed more,” Miller said. “With the state, local and extra taxes, a $60-eighth will end up being like 75 or 80 dollars.”

Though she smokes every day, Liddicote voted against Proposition 64 because she believed it would be taxed too much and make weed more expensive. However, now that it has passed, she believes it will be key in helping end the stigma surrounding marijuana.

Everyone demonizes this plant, but it’s less dangerous than alcohol,” Liddicote said.

Before dispensaries begin selling marijuana recreationally in 2018, Liddicote recommends getting a medical card.

“It’s a good idea; the renewal fee is really cheap,” Liddicote said. “As a patient, if you use weed medicinally, you’ll be exempt from these taxes.”