Kendrick Lamar’s album is just what America needs to hear 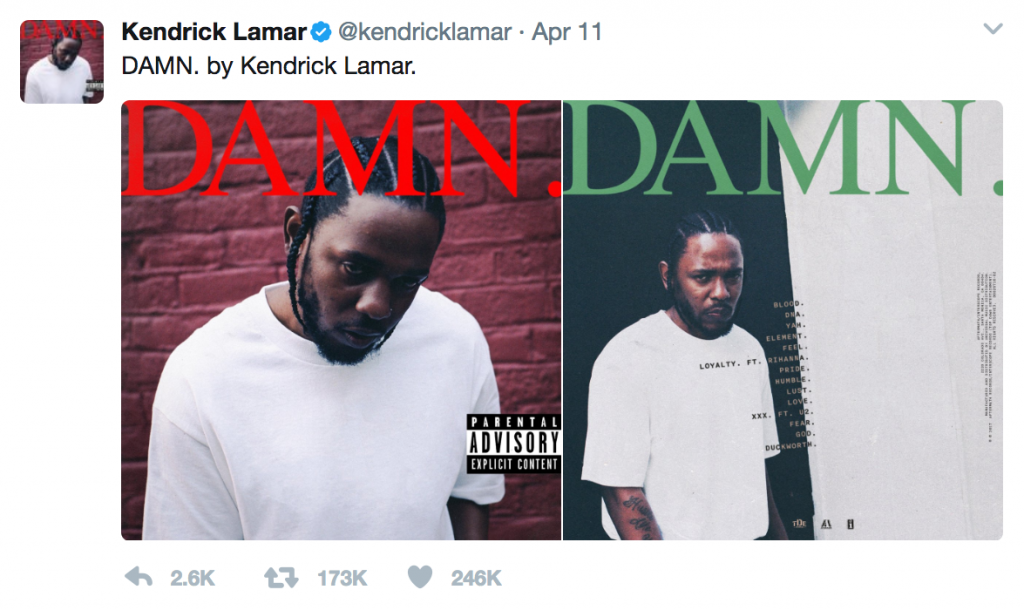 Once again, a dim light is brightened by Kendrick Lamar. In a time when it’s needed most, his thought process on what is currently happening to and within the black community is relayed in Lamar’s latest album DAMN. Current issues regarding black youth in America are discussed on a personal level, allowing the artist to relate to millions in more ways than I thought possible. Lamar is a voice of reason, understanding and a confirmation that our often questioned thoughts and opinions are not uncommon.

In 55 minutes, 14 tracks and one-word titles, Lamar touches on self-exploration, religion, hypocrisy, stereotypical expectations and black-on-black crime. He offers a response to critics who say acknowledging these topics is damaging to youth, while detailing his own experiences with violence and death while growing up in Compton, Calif.

The narrative album starts off with ‘BLOOD,’ a skit of Lamar telling a story of a woman pulling a gun on him, and ends with a sampling of Fox News’ Geraldo Rivera bashing Lamar’s performance of ‘Alright’ at the 2015 BET Awards.

“This is why I say that hip-hop does more damage to African-Americans than racism in recent years,” Rivera commented.

The chorus of the song “We gon’ be alright,” known for uplifting and motivating the black community, has become a common chant at Black Lives Matter marches and protests. How this is damaging is a concept beyond me. Lamar responds directly to Rivera in the third song, ‘YAH,’ by saying Fox News only mentioned his name for ratings.

He indirectly responds with the rest of the album.

Black youth are confused. They are scared, they are proud, they are determined and they want this brutal time in America to end. We, as black adults, are ready for it to end. Lamar uses this album as a letter to himself, explaining that he is also confused, worried and pissed off. By releasing this very personal album, he gives the black community public validation for our feelings and gives those who don’t understand something to think about.

Black America knows what they are feeling. Through the increasingly often marches and rallies, through art and writing and through social media, we make attempts at explaining ourselves, but coverage on these efforts goes unnoticed until one person reacts negatively. Lamar uses his platform so the world can hear us loud and clear, and he uses his talent to voice his confusion with the current state of the world asking God why he has to suffer and why the “pain in (his) heart carry burdens full of struggle.”

In his previous album To Pimp a Butterfly, Lamar discussed what was wrong politically in the country, what police and others were doing to black people, why it is unacceptable and how we fight to fix and move past it.

I did not find DAMN. political at all. In comparison it poses more questions and concerns than answers and solutions by speaking intensely about black-on-black crime and the black image in America. It is something that our country, in its currently violent, war-prone and minority-blaming state, absolutely needs to hear.

“It was always me vs. the world until I found it’s me vs. me,” Lamar recited in the finale track, ‘DUCKWORTH.’ “Pass the gin, I mix it with American blood then bash him in, you Crippin’ or you married to blood?”

His detailed narratives of his brush with death, almost losing his father to gun violence and utter sadness for the possible future of black Americans arrived with perfect timing, in the beginning of our country’s Trump-era. He shines a light on the crime happening within the black community, essentially saying that because we already have so much against us, we don’t need it from each other. We need to stick together.

This album is recognition and validation that I have good reason to be upset. Although his experiences weren’t my own, I still feel completely understood emotionally. He gets out frustration and a unifying message, while entertaining the hell out of everyone and evoking conversations that need to be had.

I was already a fan, but I am in awe of his honesty. Damn, Kendrick. DAMN.