SF State has a new mantra: no glove, no love 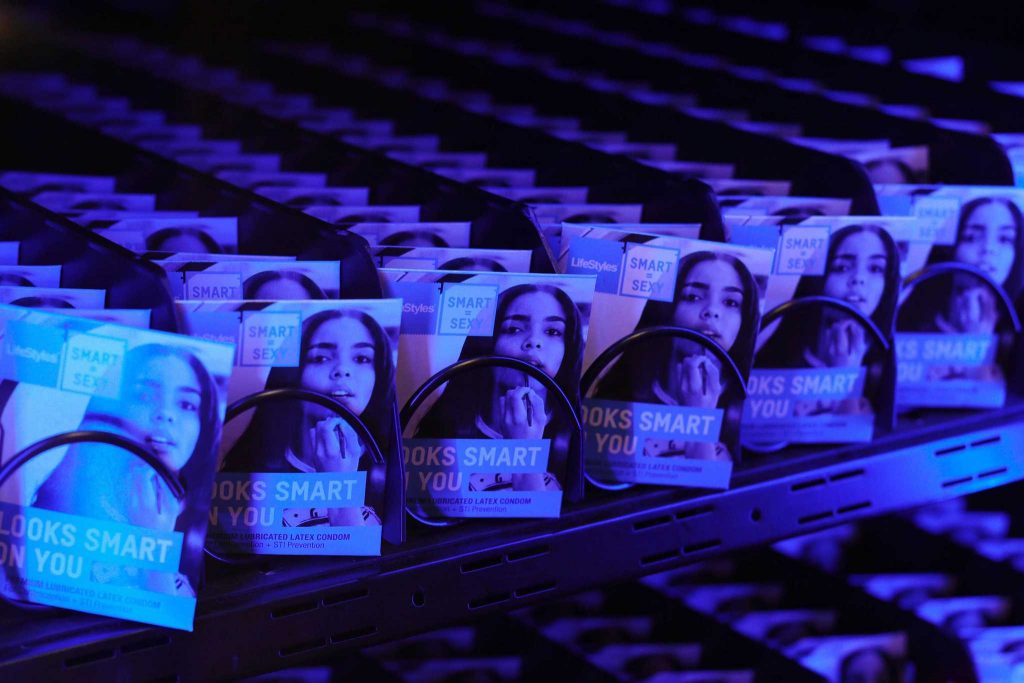 Condoms are being offered by Lifestyles for free in the Cesar Chavez Center at SF State on April 12, 2017, in San Francisco, Calif. (Mason Rockfellow/Xpress)

A Lifestyles condom vending machine has a new home beneath the main staircase in the Cesar Chavez Student Center until the end of May.

“Part of the machine’s goal is to allow students to answer a quick survey that allows Ansell to see how knowledgeable consumers are of STIs and sexual health,” said Carol Carrozza, Ansell Healthcare North America marketing vice president. “The questions will cover STI stats, basics about contraception, the history of condoms, and more.”

After a month of deliberation SF State decided to participate in Lifestyles’ “Smart is Sexy” campaign. The machine was placed at Washington Square Park in New York City prior to being brought to campus.

“As part of our ‘Smart is Sexy’ campaign, we created the vending machines to educate consumers on sexual health and provide them with responsible messaging and tools needed for sexual education,” Carrozza said.  “Our new ‘Smart is Sexy’ campaign highlights the positive qualities of being responsible and proactive about your sexual health and this was our way of bringing the campaign to life.”

Although the machine will only stay on campus until the end of May, Lifestyles’ plan to spread awareness about STIs and safe sex does not end there.

“Our goal is to bring STI/STD awareness and education to different locations across the country,” Carrozza said. “So while the vending machine will only be present at SFSU through May, it will shortly after be placed on another college campus or popular city to engage with additional consumers across the U.S.”

The new machine was unveiled April 12 and immediately caught students’ attention. Anthony Fusaro, a history major who knows someone who just had an unexpected pregnancy, thinks the vending machine is not only great, but a discreet and convenient way for students to get condoms.

“It’s a little out of the way, but I feel like if word gets around people will find it,” Fusaro said. “I think it’s super convenient.”

Biochemistry major Sean Hasson, on the other hand believes the condom machine is not in the best location for in-the-moment acts of impulse.

“I guess it’s kinda good for last minute situations, but it’s kinda inconvenient to get to,” Hasson said. “If you’re in the

spur of the moment, you’re not gonna come all the way down here.”

According to psychology major Sergio Armas, the accessibility of free condoms does more than just spread awareness about safe sex, but will help decrease the spread of STIs. He believes the machine is a great addition to campus.

“I know at least in the gay community, it’s easier to get HIV when you’re like between the age of 18 and 25,” Armas said. “It’s a pretty big demographic that gets infected with HIV because there is just not a lot of awareness around protective sex and HIV in general, so the ease and access of having condoms will help a lot with that.”

“I love that there is a condom machine [on campus], its socially responsible and spreads a good message,” Hauser said. “Condoms and safe sex are a part of being a responsible sexually active individual.”