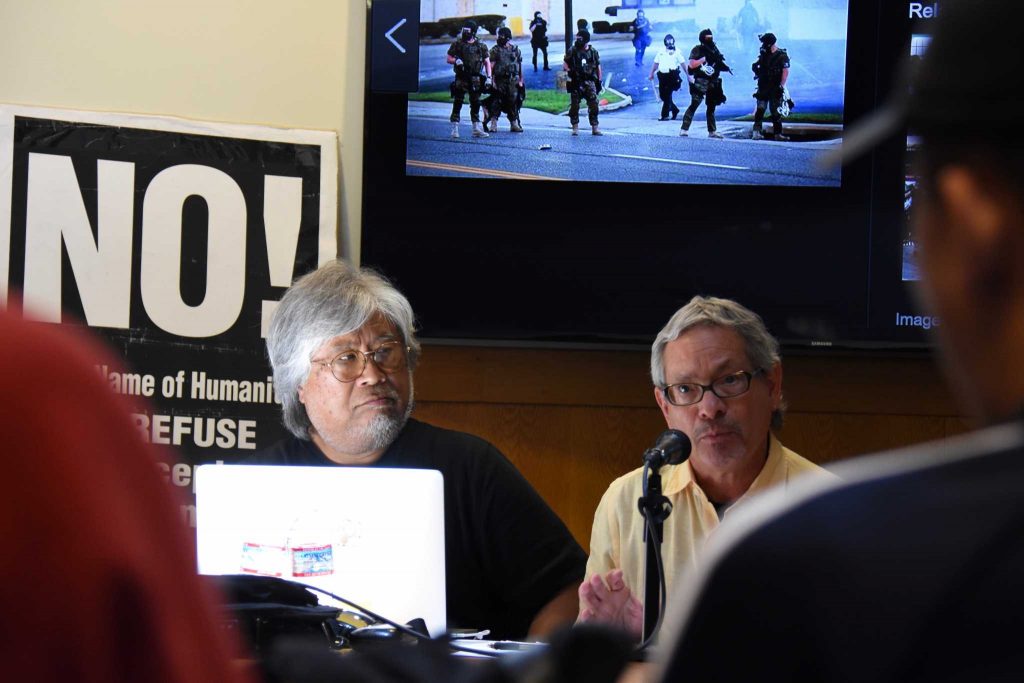 Refuse Fascism hosted a teach-in Tuesday in the Richard Oakes Multicultural Center to educate students about the dangers of the Trump administration and what they can do to stop Trump’s actions.

The teach-in featured four speakers and focused on what they consider to be fascist undertakings by the new presidential administration while encouraging the audience to oust the administration.

“This is not a legitimate regime,” said Barry Thornton, speaker and member of Refuse Fascism. “It is a fascist regime and the changes they’re trying to make are a horror for humanity.”

Thornton and the other speakers stressed the importance of acting quickly, comparing the actions of the Trump administration to early actions of other fascist regimes, most notably Nazi Germany.

“The danger is very, very real,” Thornton said. “We have a window when our actions can make a difference.”

“There’s been a systematic takeover of key state institutions by the Trump administration,” Quesada said. “It provides the cultural ground for fascism to take root.”

UC Hastings law professor Hadar Aviram said the Trump administration’s actions resemble those of a fascist regime, such as using selective facts about crime rates and immigration to promote fear.

“The government is lying to you,” Aviram said.

However, Aviram finds hope in the active resistance people are taking against the current government and reminded the audience that there is plenty they can do to fight back.

“I wake up pumped every morning, ready to fight this,” Aviram said. “If I can do it, so can you. We can do this together.”

Though Aviram finds hope in the resistance, SF State Asian American studies professor Daniel Phil Gonzales thinks that resistance can only help so much.

“Demonstrations call attention to the issue, but it does not build a movement,” Gonzales said.

Gonzales, who was active in the 1968 student protests that led to the creation of the College of Ethnic Studies, was adamant about the importance of acting as quickly as possible.

“How bad does it have to get before people realize they have to act now?” Gonzales said. “If you’re not part of the resistance, you’re part of the problem.”

Students slowly trickled out during the two-hour teach-in. Philip Broadus, Asian American studies major, was one of the few who remained until the end.

Broadus called a portion of the teach-in propaganda for the Refuse Fascism group.

“They want us to follow one direction toward one solution, but there are other ways to deal with the situation,” Broadus said. “There are tools and systems designed to legally remove him from power and ignoring these is doing a disservice and wasting energy.”

Refuse Fascism invited the audience to participate in future resistance marches for causes like climate change and immigrant rights.

“This is a marathon, not a sprint. To be able to sustain a resistance is to stay safe and take care of themselves,” Aviram said.