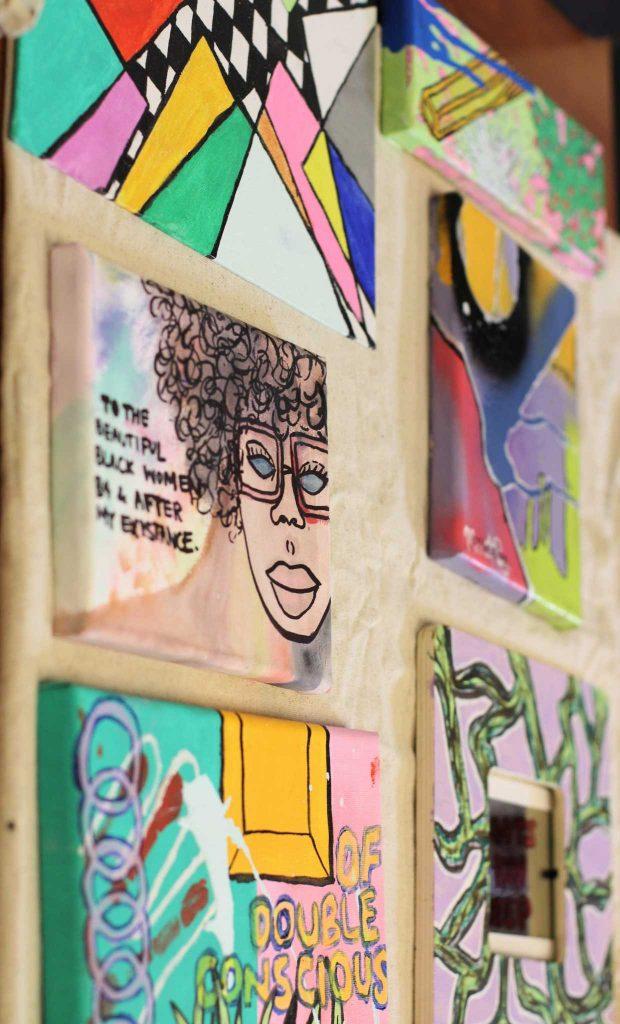 The Ethnic Studies Student Organization hosted their second annual art show “Why Ethnic Studies?” Wednesday as a form of resistance to oppression and celebration of culture.

According to Sophia Wenzel, Ethnic Studies Student Organization member, the art show was inspired last year by the threat of budget cuts to the ethnic studies department.

“Last year in the spring we were fighting for the college of ethnic studies to stay alive with the budget cuts, so we decided in that spirit to host an art show,” Wenzel said.

Although there were no formal requirements for selected, the main focus of the showcase was self-identity, ethnicity and political work.

“It’s a celebration of self-expression, people of color, queer, and transgender bringing together student artwork; we have faculty artwork as well,” Wenzel said. “We’re just creating a space, a safe space for people to hang out, eat food and we’re going to play music and have spoken word.”

Wenzel described one of her favorite pieces as a dark-side figure profile of a man sitting created by second-year student Myles Davis.

“My art is often a manifestation of whatever is stimulating me at the moment,” Davis said. “It is not expressly politically; however, as I maintain an active presence in my community and educate myself on how to improve the conditions for the working class across the world, I understand that lifestyle will inevitably find its way into my art.”

Davis said even though he is not an ethnic studies major, he feels honored to support the department with his art.

“The ethnic studies classes I have taken thus far have deepened my understanding of myself as a Mexican American man, progressive and an ally to various communities,” Davis said.

Iliana Jacobo, Ethnic Studies Student Organization treasurer, said this art show is a form of resistance because of the threats that the department faced last year.

“We were facing defunding last year, and we were going to lose our College of Ethnic Studies, so this is a form of saying we’re still here,” Jacobo said.

Although the art show was open to anyone who wanted to submit various kinds of art, the focus was on people of color, transgender and other oppressed peoples’ self-expression, according to Leslie Campos, Ethnic Studies Student Organization intern.

“A lot people are doing self-expression of their heritage, their culture, their own experiences,” Campos said. “I think that’s what makes ours a little different from other art shows.”

She said the ethnic studies department changed her life by providing eye-opening classes and creating a safe space for her.

“Ethnic studies, it literally makes up everything that I am — without ethnic studies I wouldn’t really know about my history,” Campos said. “It’s a point of view that not a lot of people get to see, we are only taught one view of history, and it’s the white man’s view.”

The Ethnic Studies Student Studies Organization wants to spread awareness about using art not only as a form of expression, but as a form of resistance and celebration, according to Jacobo.

“This is our celebration of the College of Ethnic Studies,” Jacobo said.