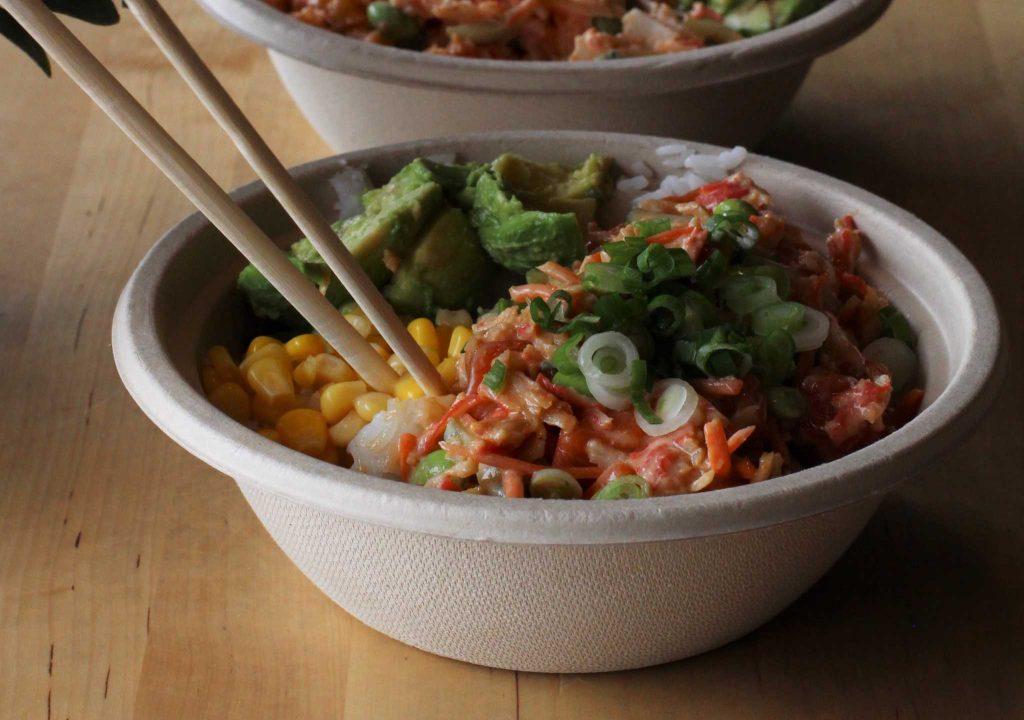 Poke Kana is located near SF State in the Park Merced shopping center, where you can create custom poke bowls in San Francisco, Calif. (Alina Castillo/Xpress)

Tucked in the middle of the student-frequented shopping center on Cambon Drive, along the eastern stretch of Parkmerced, is Poke Kana, a restaurant within walking distance from SF State that focuses on fresh and healthy food.

Poke, one of the latest food trends of the past year, is a classically raw fish dish that, due to its versatility, has blown up around the world.

According to Honolulu Magazine, poke originated centuries ago in the Hawaiian Islands. Poke, in the Hawaiian language, means “to cut crosswise into pieces,” and the name “poke” was not associated with the dish until the 1960s.

The dish traditionally consists of fresh-caught fish cubed into bite-sized pieces and is typically mixed with different seasonings and sauces, garnished with seaweed and topped off with chopped green and white onions. Throw that mixture on top of a bed of rice, and you’ve got a Hawaiian staple, the poke bowl.

But nowadays, the possibilities are endless. Everything from sweet corn to pineapple can be mixed into a poke bowl, prompting Poke Kana, along with dozens of other poke restaurants, and even a poke-focused food truck, to pop up in the Bay Area.

“Salmon is the most popular fish,” said recent University of California, Santa Cruz graduate Isis Huang, 22, who works at Poke Kana as a cashier. “We usually have had one person per shift, but it’s been getting busier and more popular so it’s too much for one person to handle.”

Relatively new, the eatery opened in August of 2016, and is not your typical “pick-a-dish-off-the-menu” type of spot. Offering a create-your-own ordering process, you can have as many or as few toppings as you’d like.

With a regular bowl consisting of three scoops of your desired protein atop a bed of rice plus your chosen toppings (fresh avocado costs $1.25 extra) starting out at $10.75, Poke Kana won’t hurt the wallet. Prices climb higher or lower depending on the size of your bowl, and range from a $6.99 veggie salad with no protein, to a $12.50 large bowl (four scoops) with the option to add more scoops for $1.75 each.

When you walk into the clean, cozy restaurant you’ll find two small boxes attached to the wall directly on your left, one containing paper menus, the other holding pencils for use while ordering.

At the counter you’ll see an assortment of compostable utensils from forks to chopsticks.  The walls are graced with ocean-inspired chalk art and tables placed toward the right side of the restaurant offer a cooler full of refreshing drinks including soda, bottled water, an assortment of iced teas and whole coconuts.

White paper lists of available appetizers are scattered around, which include items such as miso soup and an assortment of fresh fruit, and their $10.99 “cooked bowls,” (beef or eel) for those who aren’t too keen on raw fish. Detailed on other slightly larger pieces of paper are the various options to create personalized poke bowls or salads.

Behind a giant piece of glass separating the poke bar from the customers is a colorful array of fresh fish, fruits and vegetables creating a beautiful contrast to the cleanly designed monochrome restaurant. After you’ve filled in the bubbles to create your customized poke bowl, you simply hand your paper to the cashier and watch the magic happen as they carefully mix together your selected ingredients to create your very own poke masterpiece.

Customers first choose what they want their poke to be served on from the three available options: organic salad or brown or white rice. Then the fun begins.

Next come the fixings. With seven different sauces to mix in, including three different types of soy sauce and over a dozen topping options, a poke bowl can be made to appease almost every eater.

According to 23-year-old Poke Kana cashier Nicole Wu, an international business major at SF State, all of the fish served at Poke Kana is fresh and not frozen.

“I never had poke before I worked here,” said Wu, who has worked at Poke Kana almost as long as it’s been open. “With poke getting more popular, we’re starting to get busier here. A lot of poke stores have opened up within the last year.”