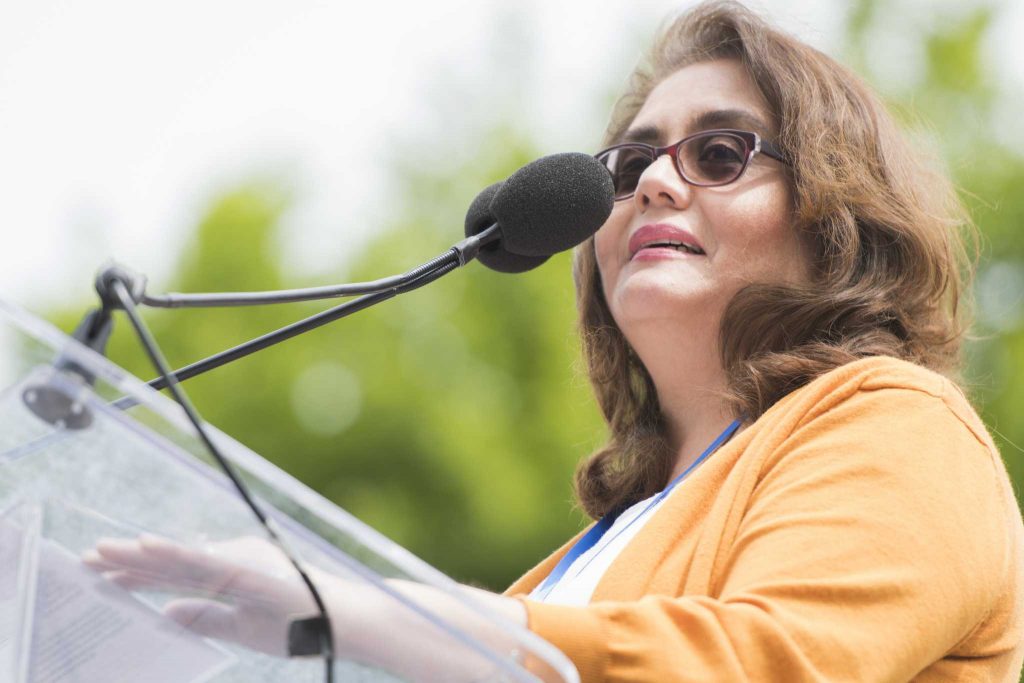 Leticia Márquez-Magaña, professor of biology and the director of the Health Equity Research (HER) Laboratory at SF State, shares her story of being criticised speaking two languages makes her dumb during the March For Science at Justin Herman Plaza in San Francisco on Saturday, April 22, 2017. Márquez-Magaña says science has proved the criticism is wrong, for two is better than one. (Kin Lee/ Xpress)

A science lab is often stocked with white laboratory coats and more often than not those laboratory coats are worn by white scientists, but professional Leticia Marquez-Magana has dedicated her career to opening the door for minority students.

At a young age, Marquez-Magana became interested in science with a continuous curiosity towards molecular biology. After earning her bachelor’s and master’s degree in biological science from Stanford University, Marquez-Magana continued her education at University of California, Berkeley where she earned her doctorate in biochemistry. She has been a professor at SF State since 1994 and is currently teaching a class about the health disparities of cancer and gene expression.

As one of the speakers during the March for Science in San Francisco on April 22, Marquez-Magana embodies the diversity that the science community came out celebrate and advocate for.

Standing in front of thousands of peers and other attendees, she spoke of an inclusive culture of diversity that the science community needs in order to thrive and to serve the betterment of humanity. Marquez-Magana’s voice echoed over the crowd as she shared a story from her childhood, touching on experiences being a first-generation Mexican American woman and realizing her community’s lack of representation.

“To make a difference for all of our communities the practice of science must be inclusive,” Marquez-Magana said to the crowd. “It must include the perspectives of multiple disciplines and the lived experiences and cultural understanding of our diverse communities to solve the complex problems that confront humanity.”

As the lead principal investigator of SF Build, Marquez-Magana hopes to give students from different ethnic and socioeconomic backgrounds more opportunities to become researchers and scientists. SF Build is a year-long program led by SF State in partnership with University of California, San Francisco students and faculty.

SF Build helps build student confidence with opportunities to learn by performing hands-on research with scientists. Creating a safe environment where students from diverse backgrounds can learn and collaborate together, even with a little conflict, can lead to more diverse biomedical research that contributes to reduced health disparities in underrepresented communities.

Marquez-Magana believes that by having a science lab filled with scientists of the same gender, race and class leaves no room for conflict when all the researchers share similar experiences that don’t reflect communities they are researching.

Imani Walker, 21, is majoring in microbiology and currently works in the SF Build program as an intern at UCSF.

Walker is currently researching the correlation between African American and Latina women who start their menstrual cycle at younger ages and an increased risk of being diagnosed with breast cancer later in life.

As a black woman, Walker can identify with the community of women she’s studying. “It’s important to have (researchers) who understand the point of view, or understand what those communities are going through because they can relate to those people and they can explain to them what kind of research they are doing and how they want to help them,” Walker said.

Natalie Warren, an SF State alumna that majored in biology with an emphasis in physiology, was also an SF Build student. Warren now works at UCSF and has just been accepted into UC Berkeley’s Public Health master’s program.

“For people of color, we are so underrepresented, not only in basic sciences but in higher education as a whole,” Warren said. She credits SF Build for opportunities it opened up for her and for the role the organization plays for other aspiring minority scientists.

“I know I would have never been placed at UCSF and I know that other people like me need (SF Build) in order to succeed,” Warren said. “This is a tool for success.”

Marquez-Magana also serves as a director at Health Equity Research Laboratory, where she leads research projects aimed at “Linking Basic Science to Community Health.” Currently, Marquez-Magana is researching whether there is a genetic link between African-American women and Latinas who have the triple-negative breast cancer gene.