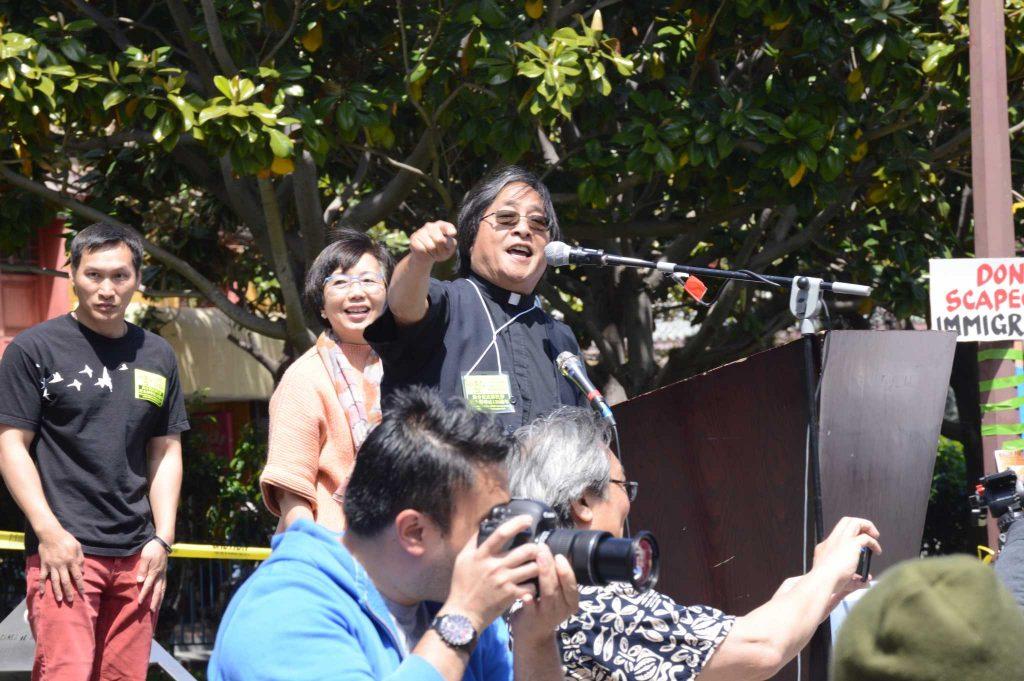 Norman Fong addresses the crowd on Saturday, May 6, 2017 in Chinatown's Portsmouth Square.(Courtesy of Darrin Baluyot)

The Chinese for Affirmative Action organization housed a rally at Portsmouth Square Saturday to commemorate the 135th anniversary of the Chinese Exclusion Act and to protest the recent travel ban and anti-immigrant policies.

Approximately 800 people attended the “The Rally for Inclusion,” according to event organizers. The event featured guest speakers and performances by Chinatown and non-Chinatown residents.

The Chinese Exclusion Act was signed by President Chester A. Arthur in 1882, marking the first time a federal law was used to prevent an ethnic working group from entering the country.

Chinese immigrants who were already living in the country had to acquire a certification to return to the U.S. if they left. Additionally, the exclusion act forbade Chinese immigrants from obtaining full citizenship.

The law was repealed in 1943 as part of the Magnuson Act.

“My dad had to go through Angel Island in 1919,” said Reverend Norman Fong, speaking to the crowd during the rally. “He never wanted me to talk about it. He was so ashamed like most people in Chinatown, but today we are here to remember and get energy from that experience.”

Fong is an ordained Presbyterian minister and is also the executive director of the Chinatown Community Development Center.

“What’s happening today in D.C. is symbolic of what happened to us, Chinese, way back,” continued Fong. “In the old days, my father couldn’t go into any hospitals to get any medical care. I am with the Presbyterian church here in Chinatown and we started the first medical clinic that was open to the Chinese.”

Helen Zia, former executive editor of “Ms. Magazine” and author of “Asian American Dreams: The Emergence of an American People,” took the stage shortly after Fong.

“California today is a majority of people of color,” said Zia. “Soon this will be true for all (of) America. On this 135th anniversary, we stand up for an America that is about inclusion and fairness to all people. We ask all people to stand up with us and insist: Trump tear down your wall, stop the detentions, stop the deportations and stop the exclusionary laws.”

Chants from the audience of “Inclusion yes, exclusion no” and “never again, never again” were heard throughout the event, guided by Mabel Teng, Chinese Culture Center of San Francisco executive director and rally co-emcee.

In addition to Usman, other non-Chinese speakers took the stage including Dr. Satsuki Ina, who spoke about Japanese internment camps; Filipino-American Jean Teodoro, who recited a poem about being bilingual; and Rabbi Lynn Gottlieb, one of the first 10 women in history to become a Jewish rabbi.

One key topic the 135th anniversary event sought to emphasize was multicultural cooperation.

“We decided to focus on the 135th anniversary of the Chinese Exclusion Act as a way of building solidarity with other groups,” Fong said. “That’s why there were speakers and people from the Arab community, Muslim community, Jewish community, Latino community and youth community … We need to build real, long-term relationships with the Chinese community and other communities.”

Charlie Chin, historian and artist-in-residence at the Chinese Historical Society, spoke about the importance of remembering the Chinese Exclusion Act and seeing its relevance today.

“All the minorities in this country have suffered various forms of oppression and continue to do so,”Chin said. “It’s very important for people to speak up and say what they think.”

Chin also asserted the importance of safeguarding the constitutional rights of free speech and emphasized the privilege of living in a country where you can speak up without the fear of reprisal.

“This is a scary time, particularly if you’re an undocumented individual or family – it’s a scary time if you’re an American citizen,” said Aaron Peskin, District 3 supervisor. “But San Francisco is a sanctuary city and we are not going to change that … So in this town there is every reason not to be fearful and everyone should feel absolutely free to engage in the government process.”

Congresswoman Judy Chu, chair of the Congressional Asian Pacific American Caucus, said in a statement that “the Chinese Exclusion Act was one of the most discriminatory laws ever passed in our nation’s history and it left permanent scars on the Chinese American community.”

“It split families apart, created a second-class citizenry and disenfranchised an entire ethnic community … The Chinese Exclusion Act was one of the darkest periods in our nation’s history, and we cannot allow history to repeat itself.”