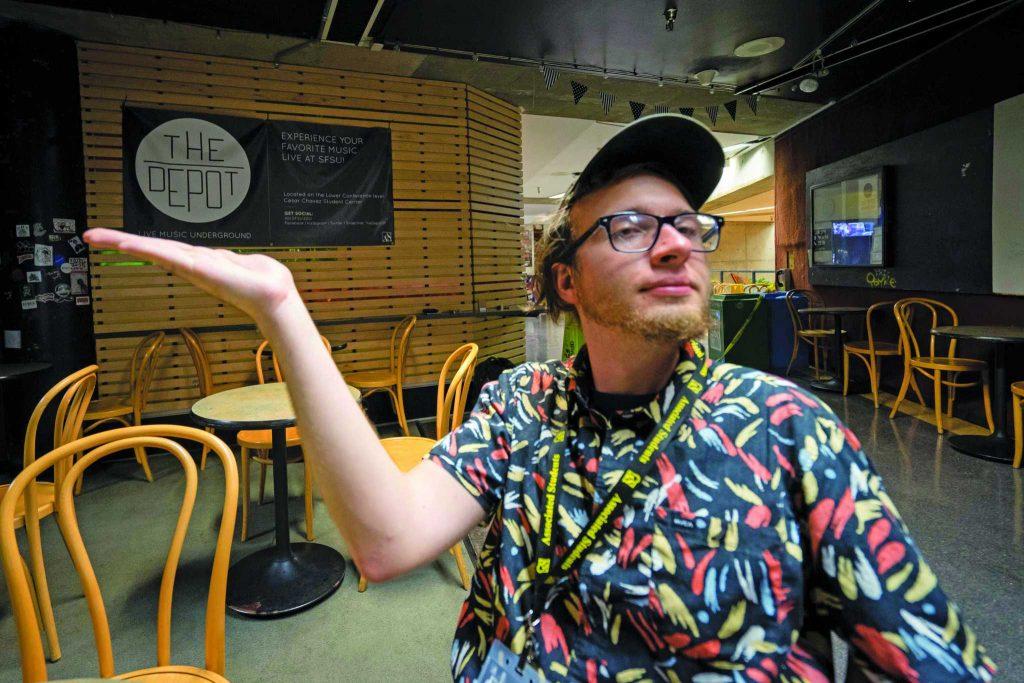 Joaquin Vasquez-Duran poses for a portrait in the depot at San Francisco State on Tuesday, August 22, 2017. (Sarahbeth Maney/Golden Gate Xpress)

Associated Students, Inc. has welcomed a new manager for The Depot this year in an untraditional way.

Instead of promoting the past assistant manager to manager, ASI has hired Joaquin Vasquez-Duran, a recent transfer student, to the position.

Because last year’s management team, Nilo Amiri and James Reichert, both graduated, Vasquez-Duran is planning the future for the music venue.

The BECA major, who has past experiences working for radio stations in Chicago as well as in the Bay Area, has been selected to be the newest manager. When Vasquez-Duran read the job description online, he felt it was an opportunity to gain more experience and sharpen skills he had.

“It’s a good career move,” said Vasquez-Duran. “Being a known person in a given community is important, being present is important.”

Training with the previous manager, Vasquez-Duran is certain he will be prepared to take on the responsibilities Amiri had under her belt for the past year.

“(Amiri) is a really good organizer,” said Vasquez-Duran. “She was showing me all the stuff she was doing that caught me by surprise. I was like ‘wow she really has it together.’ She’s been kick-ass with everything she has been doing so far.”

Amiri, who managed The Depot previously, is assisting Vasquez-Duran in the transition and helping him maintain the relevancy of the venue by responding to student interests.

“The whole point of our goal is to make sure that people feel represented in our programming as well so we keep it diverse and engaging,” said Amiri.

Vasquez-Duran is hoping to promote moreso through face-to-face interactions instead of only having an online presence.

“I’m not afraid to reach out to people who might not be the same demographic as I am,” said Vasquez-Duran. “A lot of it will be with the upcoming assistant manager and with our interns and street team. (We) will all have to collectively put together our best course of action. I call it like our war plan.”

The Depot works on a time-sensitive schedule, according to past assistant manager Reichert.

He said the next management team shouldn’t be intimidated, though.

“You’re going to have a decent amount of responsibility because you are a student here so you just need to know that you need to manage your time well,” said Reichert. “Good luck to who comes next. I’m sure they’ll kill it.”

Amiri is optimistic about Vasquez-Duran succeeding in her legacy at the music venue.

“My hope is just that he will carry on the momentum I think we’ve gained the past year and a half or so and just carry on that forward,” said Amiri.