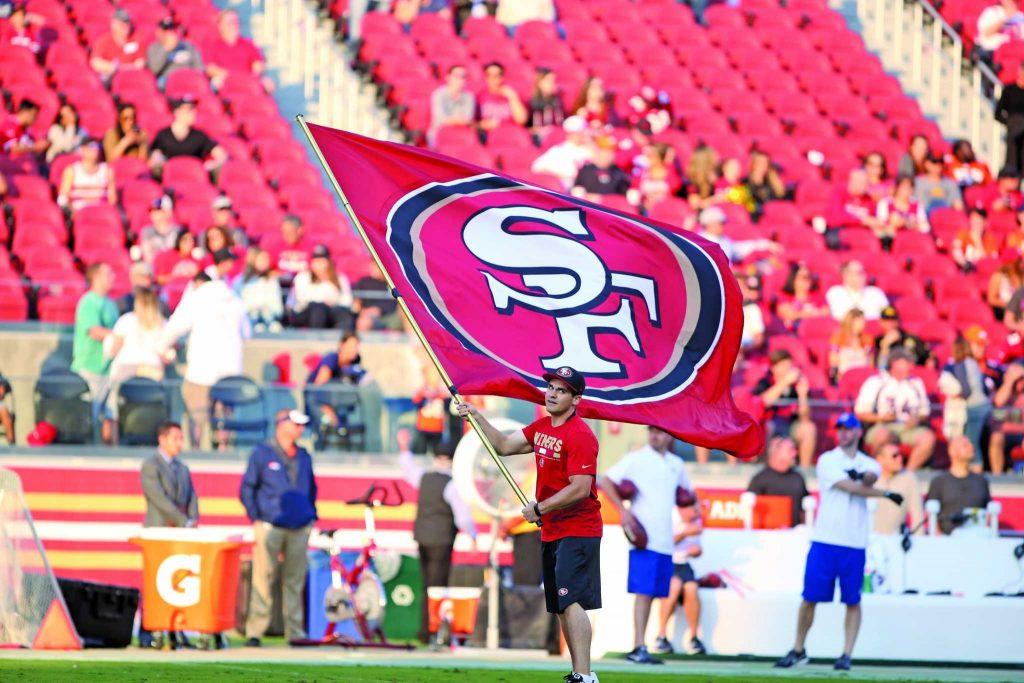 A man waves a flag before the San Francisco 49ers preseason game against the Denver Broncos at Levi's Stadium in Santa Clara, Calif. on Saturday, Aug. 19, 2017. (Mira Laing/Golden Gate Xpress)

After a 19-year break, the NFL has planned and relocated the Oakland Raiders as well as two other teams.

In addition to this, the 49ers moved from San Francisco to Santa Clara in 2014 in order to have a more modern stadium while still remaining in the Bay Area.

So why all this movement? Seeing that the owners have the final say in any relocation, the easy answer is money. However, this is only part of it.

The full reasoning is more complex than it seems. While relocation can bring into a city a team to call its own, it also brings along the risk of alienating an entire fanbase.

The most recent example of this is the decision to relocate the Oakland Raiders to Las Vegas earlier this year. This decision was a controversial one at best throughout the league.

Many league officials, including owners, were concerned about bringing the NFL to Las Vegas. The temptations were great, and as players’ judgment is sometimes suspect, it was definitely a risk.

However, many of these same risks and temptations are what made Vegas such a great destination for a franchise in the eyes of the owners.

The Raiders was an ideal team to move there. The team has a brand throughout the country, particularly on the West Coast. The proximity to its former home of Los Angeles was also a bonus.

Furthermore, the Raiders had tried and failed for years to get a new stadium built in Oakland. The dilapidated Oakland-Alameda County Coliseum simply is no longer in any state to be hosting professional sports.

Raiders owner Mark Davis saw the move to Vegas as an ideal opportunity to increase profits by moving to an area with higher traffic from tourists and locals. Never mind the fact that Oakland has a major fan base throughout the Bay Area, the nation’s fourth largest television market, he saw the opportunity and was done waiting for Oakland to create a viable stadium option.

Although there are fans of the Raiders in Vegas, the amount of fans certainly does not compare to those in the Bay. I have heard many fans, even loyal season ticket holders, say they will no longer root for or financially support the team. Others, though they are die-hard fans, are still upset about the announced move.

This relocation was completed by a minimum of 24 out of the 32 owners approving it after no viable stadium options were proposed in Oakland. The owners were certainly happy about the idea, as they will earn a combined total of $53 million from the Raiders’ move, along with the Chargers’ and Rams’ move to Los Angeles this season and last, respectively.

Vegas city officials should also be thrilled, since they will have thousands of NFL fans leaving Sin City Sunday night or Monday morning, rather than Sunday morning. This can only mean more revenue for the gambling capital.

The 49ers’ move to its new stadium in Santa Clara has also frustrated many fans, even though this was not a true relocation.

The trek down the 101 or the 280 freeways from San Francisco can be a difficult one. Also, it makes taking public transportation to games an extra hassle for San Francisco residents. However, with the Raiders’ move, the Niners will soon be the Bay’s football team.

For fans, relocation truly can be a no-win situation. I feel the best thing the league could do is to consider an even more controversial option in the future: expansion.