San Francisco comes together for a day of peaceful counter-protests 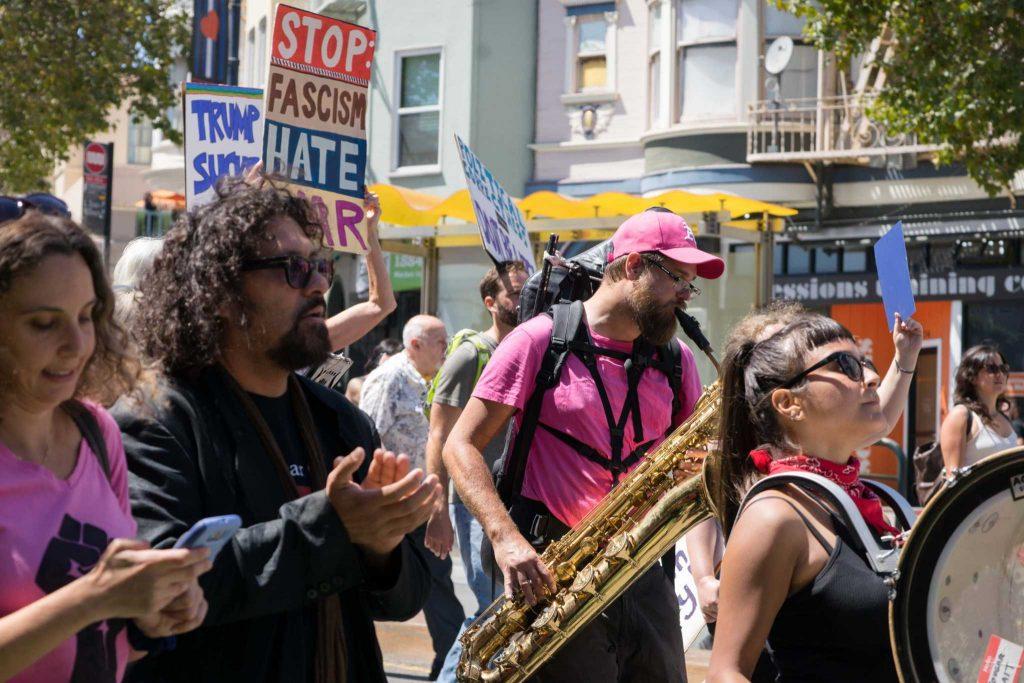 What many anticipated to turn into a violent clash between right-wingers and their opposition morphed into a day of peaceful gatherings for counter-protesters who had no one to confront on Saturday.

The right-wing group, Patriot Prayer, and its supporters were a no-show at its planned news conference in San Francisco’s Alamo Square Park after it canceled its initial “Free Speech” rally at Crissy Field the day before.

“I’m really proud of San Francisco for doing what we do best, which is to push back and resist against the extreme right and make clear that we are about embracing everyone,” said California State Senator Scott Wiener, who joined counter-protesters at Civic Center. “I don’t think they realize what they got themselves into with San Francisco; this is not a fertile ground for their ideology, so I think they bit off more than (what) they can (chew).”

City workers erected a fence barricade around Alamo Park Saturday morning and San Francisco police officers stood guard around the fence — a precautionary measure taken after the violence that unfolded in Charlottesville, VA., where a car plowed into a group of demonstrators protesting a white supremacy rally, killing Heather Heyer on Aug. 12.

Yet, hundreds of counter-protesters gathered in front of the fenced-off Alamo Square Park at Steiner and Hayes streets and Roberto Hernandez, an organizer for “Frisco Resistance”, declared their gathering a “victory rally” after no right-wing supporters showed up.

“It’s a huge victory for San Francisco today, knowing that (Patriot Prayer) canceled their rally at Crissy Field and now they canceled their press conference (at Alamo Park),” said Hernandez, who, among others, spearheaded the “victory rally” at Alamo Park.

Instead, Patriot Prayer held a press conference in Pacifica, Calif., with its leader Joey Gibson announcing on Facebook that he would “pop up at random spots in the city.” He and a couple of dozen of his supporters eventually made an appearance at Crissy Field Saturday afternoon. But, the day already belonged to the counter-protesters who outnumbered the few right-wing supporters that appeared.

In the press conference for Patriot Prayer, Joey Gibson reiterated concerns over safety issues as the reason for canceling both events.

Gibson blamed politicians, including San Francisco Mayor Ed Lee and Congresswoman Nancy Pelosi, for tagging him and his group with labels that he essentially saw as inciting violence.

“ …  You have a mayor who says that we’re hateful, and we’re violent,” Gibson said in the press conference. “ … To call us white supremacists made San Francisco way more dangerous than it ever could have.”

Gibson said he is not a white supremacist and his rallies were about free speech. Lee feared Gibson’s rally would attract “extreme and racist fringe groups.”

“I asked our public and our residents of San Francisco … to honor our request to not dignify people who are coming in here under the guise of patriot and prayer words to really preach violence and hatred,” Lee said at a press conference on Wednesday, Aug. 23.

“Violence and hatred and incite violence — that is their purpose; we know that as a fact by simply watching how they’ve acted in other cities,” Lee said.

People held hands and formed a peace circle around a group of dancing protesters. The smell of smudge sticks — a bundle of dried herbs that is lit on fire —  filled the air. And the occasional unified chant of “No Trump, no KKK, no fascist U.S.A,” vibrated through the Steiner and Hayes streets’ intersection and echoed through numerous streets in San Francisco as the counter-protesters began marching.

People came dressed with flowers in their hair; some wore rainbow colored clothes. Others, clothed in all black, joined the crowds of different counter-protesters groups in a climaxing march to Civic Center, where a “No Place For Hate SF” protest took place.

“It’s traditional (to come to Civic Center),” said Juanita More, who organized a “March for Equality” rally. “If you were a bird and flew up into the sky and looked down on San Francisco, you’d have a pretty good idea of who we are.”

Gibson, who later in the day showed up at his original rally location, Crissy Field, had been scrambling around the city all day, according to a report by SFGate.

Some screaming matches unfolded between the few right-wing supporters and counter-protesters that found their way to the field, but nothing came close to the violence many had anticipated.

“These people hate that I’m reaching out; they hate it because when I bring moderates together, it gives the extremists no platform,” Gibson said. “At the end of the day, I think the left needs to be responsible for speaking out against Antifa and BAMN; I will continue to speak out against white supremacy and (the) extreme right.”

As the day unwound, many people were all smiles. Live music played in front of City Hall; people danced and children played in the grass at Civic Center Park.

For Tracy Cone, who commuted from Sacramento, the day filled with peaceful counter-protests was a sign of love.

“I just wanted a show of strength and numbers to show that there are more people for love and not for … this hatred that is going (on) in this country right now,” Cone said. “I’m for free speech, but I think that we, by our assembly, can show that our speech is louder and our speech is love.”