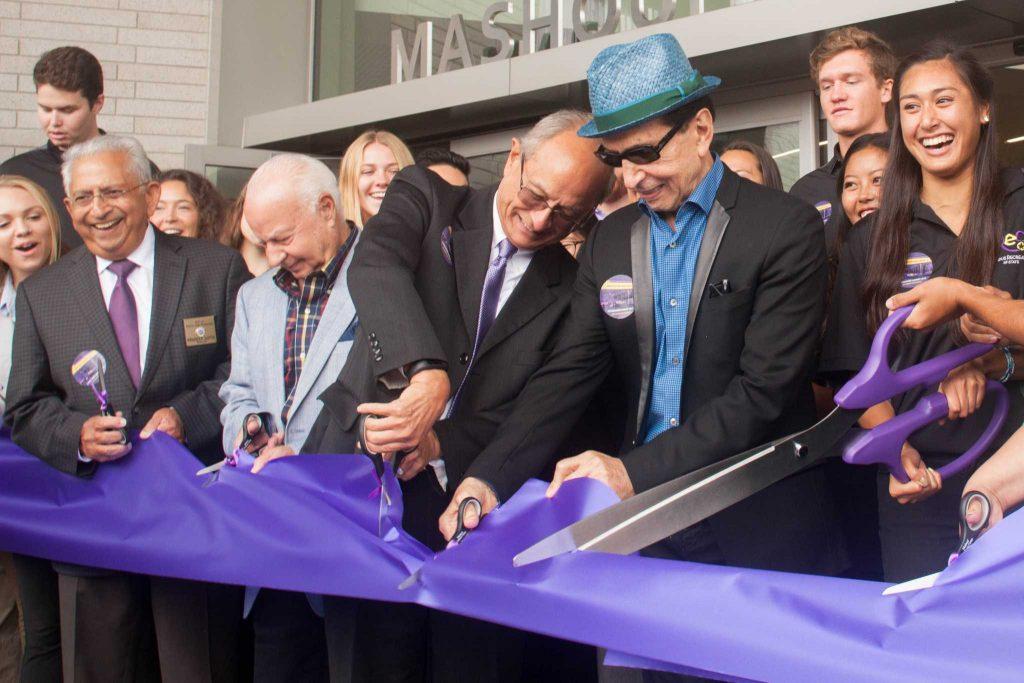 The long-awaited grand opening of the Mashouf Wellness Center came to fruition Tuesday, Aug. 29 with a ceremonial ribbon-cutting and a series of distinguished speakers that included benefactor Manny Mashouf and SF State President Les E. Wong.

The Wellness Center, which broke ground in 2015, was conceived in 2008 as a significant improvement to the recreational facilities provided at the time. In 2010 the student body voted to use an increased Recreation and Wellness fee to fund a new, state-of-the-art building that would encompass a wide variety of perceived student needs.

Addressing the crowd Tuesday afternoon, Director of Campus Recreation Pam Su noted that, when she became a part of the team four years ago, “giving the students a place to be active, a place to build community and a place for them to find their health and happiness, seemed so obvious.”

The transformation from idea to reality, and the means by which the Wellness Center came to exist, was the focus of Tuesday’s ceremony.

Manny Mashouf, a Gator from the class of ‘66, donated 10 million dollars to the project, the single largest donation in the history of SF State, according to the project website.

Mashouf spoke Tuesday, not only about what the process meant to him, but also about the pride he feels regarding the sustainability of the complex that shares his name.

From the beginning, the team behind the project strove to make the building a beacon of sustainability, according to Mashouf and nearly all the speakers.

Doug Hoffelt, Senior Architect at WRNS Studio, the local firm responsible for the building’s design from the start, said he was “incredibly excited to see the complex become available to students,” and that it was “amazing the team decided to go for LEED Platinum,” which is the U.S. Green Building Council’s highest designation for sustainable construction projects.

Hoffelt also shared that “many of the most important aspects will never be seen by those who use it,” a testament to the level of symbiosis Hoffelt chiseled between function, design and sustainability.
The architect, like many of the speakers, considers the building’s crowning achievement to be the “Gray water” system, which will repurpose water collected from the pool and sanitation and use them to irrigate the plant life found among the grounds.

While the process that led to the grand-opening was the focus of the roughly hour-long ceremony that opened the day’s festivities, what followed was a celebration dedicated to the patron the center was built to serve: the current and former students of SFSU.

Though alumini and faculty will be able to purchase memberships, it’s abundantly clear the current SFSU student is the target audience.

With the ceremonial ribbon cut, the mood of the afternoon quickly shifted from pomp and circumstance to jump, party and dance as speakers defied the gloomy afternoon clouds, blaring music that clearly signaled that it was time for the students to have fun.

The crowd quickly funneled through an arch made of purple-and-gold balloons to get, what was for many, their first glance of the new complex.

Alberto Fuentes, Alejandro Martinez, Peter Cruz and Lorenzo Cruz were all excited to use the facilities in the coming months.

The freshmen were “grateful to those students who made this possible for them,” and when asked about the increased fees, the group collectively shrugged, equally sharing the sentiment that “Hey, its paid for, it’s worth it.”
Fellow student Daniel Rodriguez, pleased that the gaps in his day would now be filled, said “the benefits make the fees much easier to accept.”

Second year graduate student Jackie Lenta sees the fee increase as “something that usually happens anyways,” and was happy to see that the school was “using it for something good.”
Many students seemed genuinely unaware that their ability to use the Wellness Center was directly tied to the fees they pay each semester.

Students also played a large role in bringing the project to life, with Student Managers for Campus Recreation Claudio Arquero and Rob Ruiz sharing the podium as the final speakers of the ceremony.

Recounting their journey from new hires to integral parts of the process, Arquero and Ruiz stood as proof that the Wellness Center was truly an effort that strove to include as much input as possible to provide the experience that Director Su so clearly articulated in her speech.

Near the midpoint of her address, Su pointed out that the team used an eight-part definition of the word “wellness” in order to provide students, faculty and alumni the facilities they provide.
The team set out to provide physical and mental wellness, among other benefits.

Though it may take time to reach the peak of each goal, Tuesday’s grand opening provides the campus with its best shot at getting there.