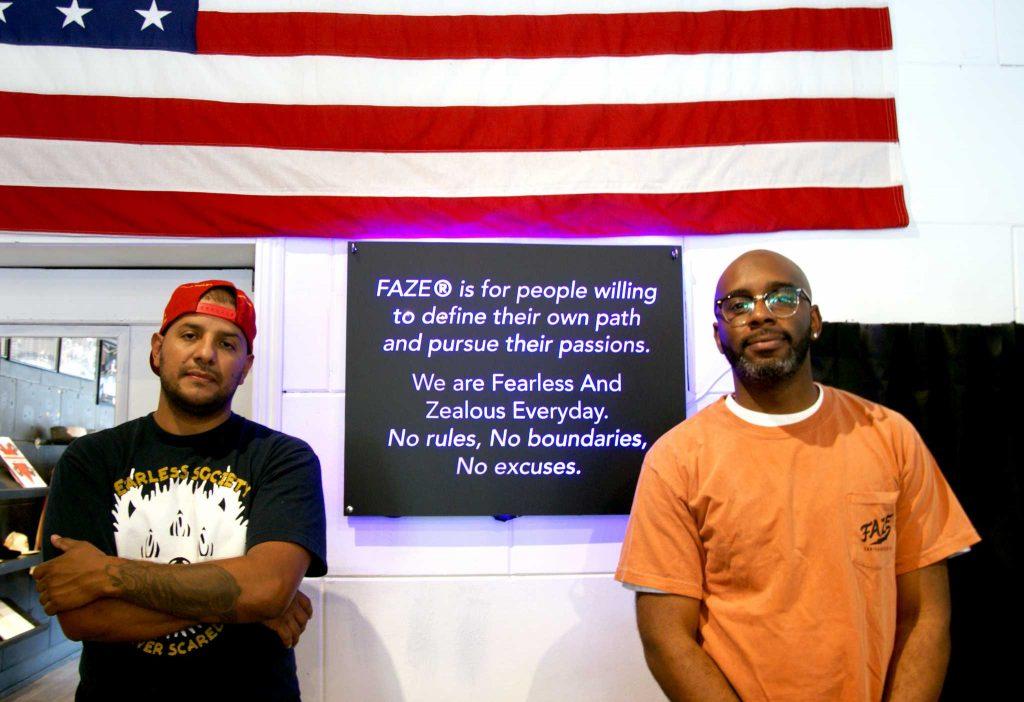 FAZE, a men’s streetwear brand was established in 2007. The brand’s name, an acronym, stands for Fearless and Zealous Everyday, which came to Travis during his time at SF State.

Travis graduated from SF State in 2007 and notes a few influential professors who still teach at the university. Among them were Bruce Paton, associate professor of business, and Oba Tshaka, Emeritus Professor of Africana Studies.

Paton remembers Travis from his business and society class. “I’ve been following it loosely on the web. I’ve been really impressed with Johnny,” he said. Paton called it a “gutsy” move to start a brand from scratch that quickly after graduation.

“Future businesses should serve society’s needs and it’s neat to see a brand launched from scratch with that kind of view,” Paton said.

“The acronym came to me in a marketing class at State,” he said. “It was a big theater class, I think McKenna Theater. We were reading the textbook and that word, faze, popped out to me.”

Travis, a Bay Area native, developed the brand concept while at SF State and teamed up with Gracia, originally from Southern California, shortly after graduation.

“It was pretty much online, we sought a few different retailers,” Travis said regarding the brand’s beginning.

FAZE Apparel will be on full display Saturday, Sept. 2, during the FAZE five-year anniversary celebration at the flagship 21st and San Carlos streets location, which is in San Francisco’s Mission District. The event begins at noon and features multiple local DJs behind turntables.

The blue brick of the corner shop immediately catches the eye. Upon approach, the shop’s interior becomes more noticeable.

A small table in the center houses phone cases, beanies, and sweatpants adorned with the FAZE logo while a small foosball table sits in the corner.

Stevie Calderon has been working at FAZE for three years now. It started with an internship and blossomed into a friendship. He’s enjoyed the community involvement from the young entrepreneurs.

“FAZE is really about the community.” He said. “Both of them are very personable people. That’s one thing I’ve always appreciated from them.”

Both Travis and Gracia understand the difficulty in building a brand, and they look back on their hustle up the fashion ladder with some humor. “Anywhere they’d allow us to put a table, we’d sell,” said Gracia with a chuckle.

The hard work from Travis and Gracia is beginning to snowball into larger brand recognition, but for these two, it’s more about the freedom from a boss and the pursuit of what they love.

“We try not to adapt to trends or fads because at the end of the day that’ll be gone in a couple of weeks,” Gracia said. “We just do whatever we like, how we want to, and kind of keep going like that.”

“Like Herbert said it’s just about that freedom, that fearlessness to pursue a passion … everyone has an idea,” Travis said. “But initiation and execution on that idea takes a level of fearlessness and drive.”