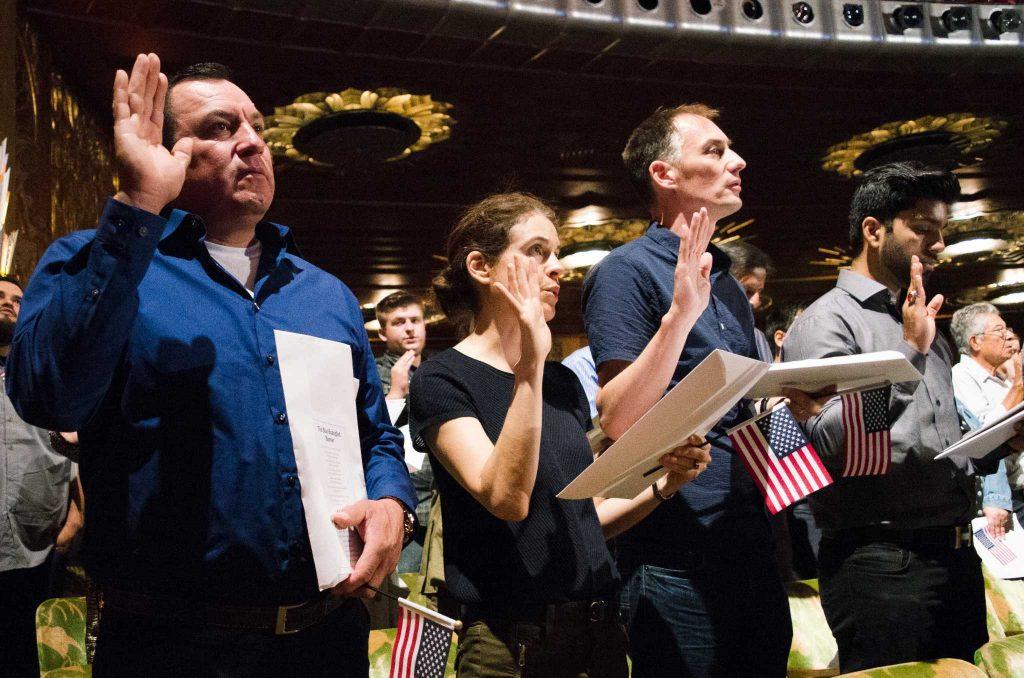 The ceremony was hosted by U.S Citizenship and Immigration Services. Democracy Action SF organized the voter registration booths that were held outside the theater.

“As part of our service to the Democratic Party, we also help register new citizens to vote,” said Susan Pfeifer, the event organizer for the voting booths that were held outside the ceremony.

“This is particularly satisfying to ensure these new Americans have the right to vote.”
Pfeifer said that, on average, they register 150 to 200 citizens each event.

The ceremony started with the 1,141 new citizens raising their hand and taking the oath, followed by the pledge of allegiance and speakers from U.S. Citizenship and Immigration Services.

Joe Fitzgerald Rodriguez, from the SF Examiner, was a speaker at the ceremony. He discussed his experience with a childhood classmate who was killed by a police officer 3 years ago.

“You are citizens and now you have a responsibility and you are blessed,” said Rodriguez. “As you leave I ask that you take notice on your responsibility to exercise your rights.”

“When I referred to the new citizens exercising their rights, I was encouraging them to not be passive citizens — but instead, to exercise their right to assembly, and their freedom of speech, as active citizens engaged in our democracy,” said Rodriguez in email.
The Paramount Theatre was full of around 3,000 attendees. Families, husbands, wives and friends all collected outside after the ceremony to greet their loved ones with flowers. Others waved American flags to rejoice with the new citizens.

“I feel very happy to be a participant of this great event, to become a citizen is very important, now they can listen to our voices,” said Olina Calderón.

Calderón attended the ceremony with her mother and sisters. She knows the United States is her chance to gain work opportunities and is eager for what’s to come.

“I feel very happy to have become a citizen today and also very restless for many who are waiting to become citizens,” said Calderón.

Although Calderon is enthusiastic about her new citizenship, she says the thing she will miss the most is the food from her home country, Honduras.

Marta Pablo attended the ceremony with her sister-in-law who chose to wear a traditional huipil, which she wore to represent her roots. Huipil is a traditional Guatemalan garment worn by indigenous women from central Mexico to Central America.

“She is very happy that she got her citizenship, she likes living and working here. She wants to continue giving it her all,” said Pablo regarding her sister-in-law.

Chand Bibi attended the ceremony alongside her family.

“Pakistan is very different, the United States is very different and beautiful place, the people here are very nice and honest,” said Bibi. “I’m very excited. I have been waiting for this pleasure for two or three years now … today is my happiest day.