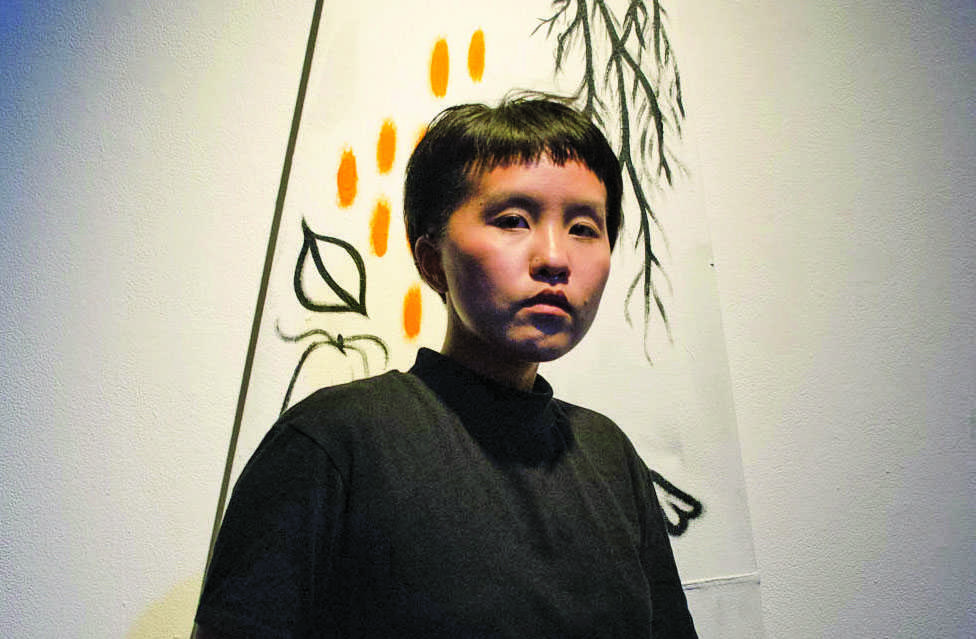 Renae Moua, the show’s curator, chose a theme that hit very close to home as a queer person of color. She’s frustrated by the lack of artistic spaces for people like herself to showcase their thoughts and beliefs, so she took matters into her own hands.

“I wanted to focus on how queer people create their own space in the world,” Moua said.

Utilizing the intimate confines of the gallery, “Queer Virality” showcases two documentary-style projections, a hanging piece, a short film, a few abstract creations and a collage accompanied by a costume made of a mask and a paper cut-out body. The variety of art, and their unspecific themes, mirrors Moua’s definition of the term “queer.”

“It’s a way of consciousness,” she said. “Not being binary, not conforming to sexual or societal labels.”

Adrianna Alejo-Sorondo, who knows Moua from their shared hometown of Fresno, Calif., was immediately interested in being a part of the exhibition because of Moua’s embracive attitude.

“I knew I could bring her whatever I was working on and she’d be down for it,” Alejo-Sorondo said.

“I like shows that focus on minorities, but are also conceptual,” Morales said.

The attendance steadily increased during the three-hour reception, nearly filling the small room. Free food and drinks were provided, along with two DJ sets – one vinyl set and one ambient noise set that complemented the show’s theme.

Eliana Zacarias, a museum studies major, was impressed by the “very dynamic use of the space.”

She was glad to see an exhibition like Moua’s, although she was not surprised that it was showcasing at SF State.

“This school is great at supporting its students and allowing them to express themselves,” Zacarias said.

Moua gave a short speech nearly halfway through the three-hour reception, expressing her gratitude for everyone who came to the show — one she spent so much time and effort assembling. She couldn’t find something she felt the world needed, so she made it herself.