Title IX at risk under DeVos 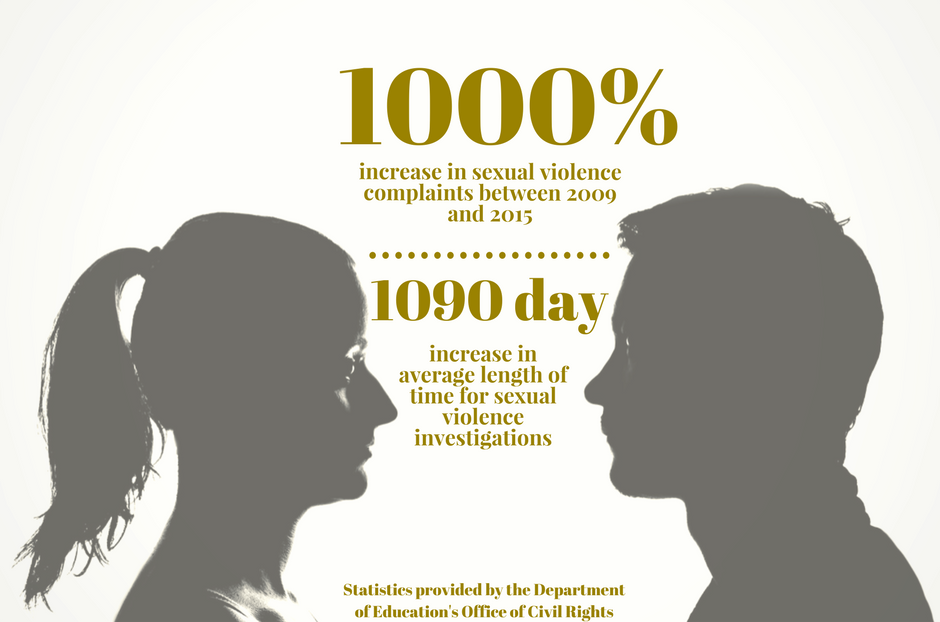 This story was originally published stating that the data regarding the number of complaints and length of time for investigation was pulled from the U.S. News and World Report. Though the data was pulled from this site, it was originally provided from the Department of Education’s Office of Civil Rights and released by Sens. Barbara Boxer of California,Tim Kaine of Virginia and Kirsten Gillibrand of New York.
Betsy DeVos, business woman and Donald Trump’s pick for Education Secretary, made a bold decision this week despite her lack of experience in the education field.

DeVos, speaking during an address at George Mason University in Arlington, Virginia, officially announced that she will be rolling back on Title IX regulations for schools across the country.

Though DeVos was able to cite instances of the system failing not only those accused of sexual assault, but also instances of the system failing the survivors, her overall goal of rolling back on the law lacks a specific plan and fails to acknowledge any success of the current law, and is, therefore, inadequate to serve survivors of Title IX issues.

Title IX is a law under the Education Amendments of 1972 that protects any individual from sexual discrimination, harassment and assault in educational institutions or activities receiving federal funding. As a result of the law, students across America have been able to file against those who have harassed, abused or discriminated against them in an effort to receive justice for each of their individual cases.

DeVos wishes to challenge aspects of the law and receive more feedback from the public, citing students that she has spoken to who have not been able to receive proper justice – ranging from an athlete falsely accused of sexual abuse and assault to a survivor who was told that she should wait for the person that assaulted her to graduate and leave the school.

However, in stating the issues that she has with the law and the instances where the law has failed students, she, herself, fails to properly address instances in which the law has been successful.

DeVos mentions in her speech that she has met them personally and heard their stories.

In focusing solely on the instances in which individuals do not receive proper justice or are falsely accused, DeVos falls into a fallacy. She fails to recognize any instances that she came across, or refused to even look for these instances, for that matter, where students express how Title IX has helped or worked for them. The reality is that students have continued to utilize Title IX policies – a report from the U.S. Department of Education’s Office of Civil Rights and released by Sens. Barbara Boxer of California,Tim Kaine of Virginia and Kirsten Gillibrand of New York states that between 2009 and 2015, there was a jump of 1,000 percent for sexual violence complaints and there was a trend of rising complaints since 1980.

There are success stories out there in addition to the stories of those who have been failed.

DeVos focuses solely on the problems of the matter instead of truly focusing on the whole picture – an aspect of her research she is, ironically, heavily trying to emphasize.

On the other hand, it is also important to highlight the instances in which the law is not functioning as well as it could be, which is what DeVos is currently shining at.

Many complaints take years to conclude, as the same report from the Office of Civil Rights shows, with the average length of time for a case to be fully investigated rising from 379 days to 1,469 days between 2009 and 2015. In this time, and as DeVos highlighted, there could easily be instances of cases where the accused graduates and the survivor are unable to receive proper justice.

Additionally, guilt in sexual assault cases can often be difficult to determine, due to the privacy in which many of the situations fall under and, as it follows, the lack of witnesses with each reported case.

However, these facts do not undermine what the law has already done for so many and could potentially do for sexual assault survivors in the future. With a specific laid out plan, including proper evidence and statistics, as opposed to DeVos continuing to only hear from the public, as she intends, Title IX policies can be built upon instead of being taken away and rolled back on, as DeVos implies.

The inclusion of different instances of Title IX failing in DeVos’s speech may seem all well and good, as well as her intentions to create an environment with more access to due process, but DeVos fails to give an adequate plan and, at this time, is seemingly all talk.