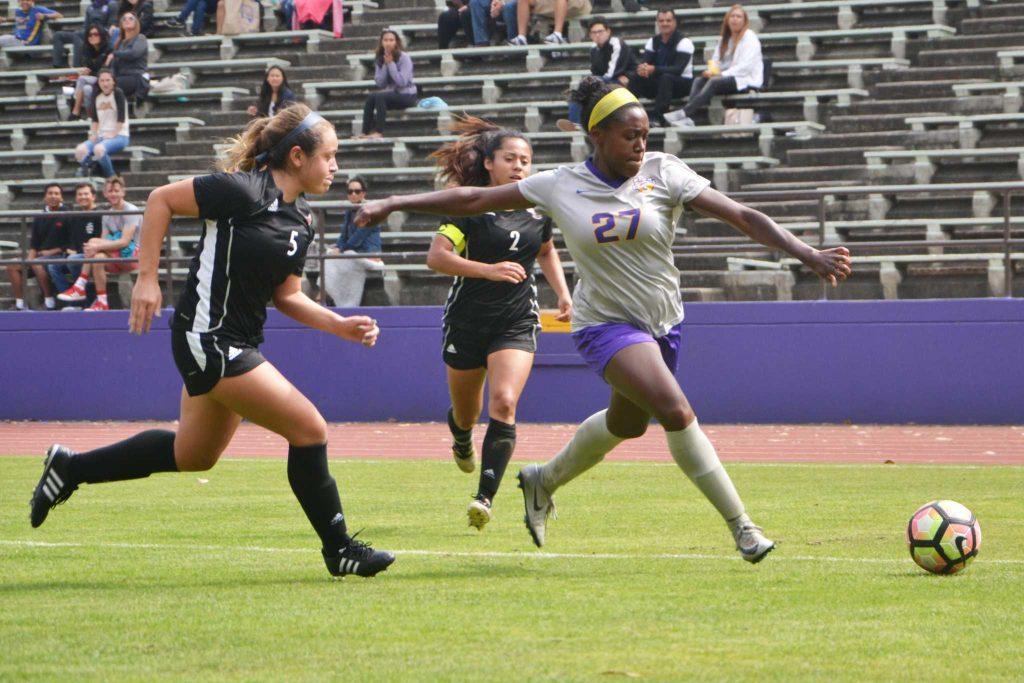 Bianca Lowe (#27) scores a goal during the first half of the women’s soccer game against Holy Names University at SF State’s Cox Stadium on Saturday, September 16, 2017. (Golden Gate Xpress/Cristabell Fierros)

The Hawks started out with possession of the ball, but the Gators quickly pressured them to grab control of the game.

Within the first 15 minutes of the game, the forwards made quick passes inside the goal box to maintain ownership. With each tap, the strikers ended up close to the goal until forward senior Bianca Lowe comfortably side-tapped the ball in the goal, which would end up being the only goal in the game.

“Our offensive strategy was to support each other and get as wide as we can,” said Lowe. “We try focusing on quick passes, play what we see. That movement really throws off the defense.”

Throughout the game, the Gators made their quick movements and rarely saw their opponents make attempted shots; four shots in total in comparison to the Gators’ 18 shots.

However, their strategy was not catered specifically toward the offense.

The Gators’ defensive strategy gave the goalkeepers a restful and easy view of the playing field. This strategy ended in a total of zero saves for the Gators goalkeepers and 10 for the Hawks’.

Freshman goalkeeper Nicki Rucki explained how their defense let her take a break from the action.

“To transition back quickly and get numbers behind the ball,” Rucki said. “We said from the start that we wanted to play at our pace and not drop down to their level. By quick passes, we thought that we could move around them easily.”

The midfielders added to this strategy, noting that they needed to bring the ball up, but also keep it from getting it to their own goalkeeper.

“Our coach always tells us to keep composure and once we get the ball to pass out of pressure first,” said freshman midfielder Ana Williams. “That’s when we go up [and] start attacking again rather than try and make a play right away. We try to get out first and try to go back up.”

Additional pressure came from the defenders and forwards who all played cohesively. The Gators’ style of playing landed freshman midfielder Samantha Craig’s second assist of the season and Lowe’s third goal.

This is head coach Tracy Hamm’s third season, which looks to be promising after the Gators fifth consecutive win.

The Gators are 5-1 now with their next game being held on Friday, Sept. 22 against Chico State University at their home stadium.