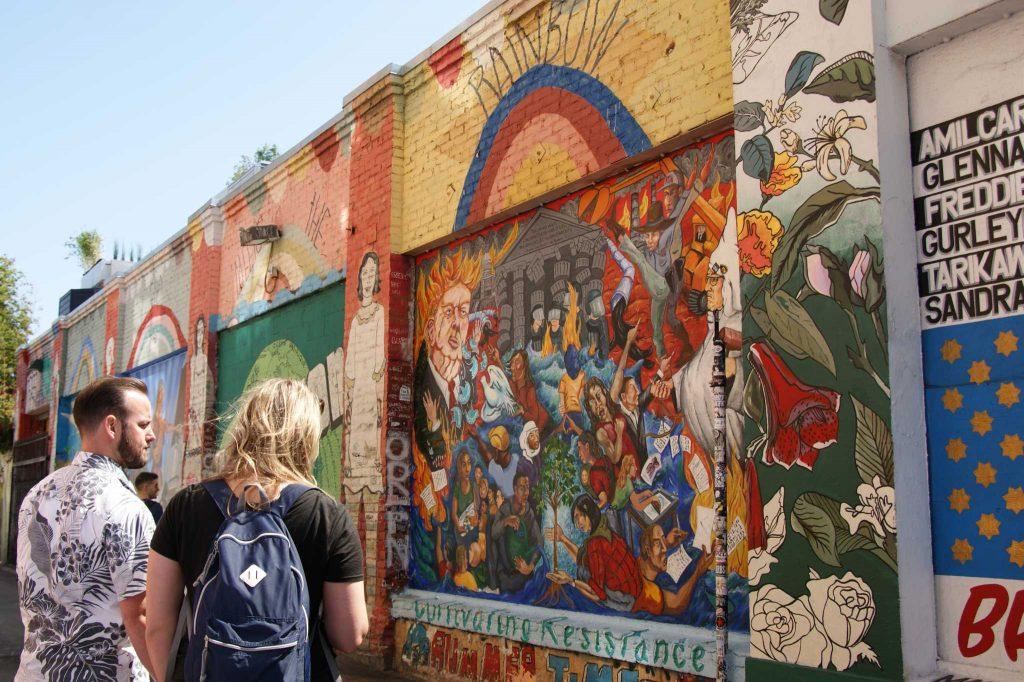 “My job is to remind them that their individual voice counts.”

These are the words of Victor De La Rosa, an art professor at SF State. They were meant for his students, but they speak to anyone who cares about the current political and social climate in the United States.

The election of President Donald Trump made a lot of people confused, angry and even scared. According to information collected by the Southern Poverty Law Center, over 1,000 reported bias-related incidents occurred across the United States during the month following Trump’s victory last November. According to the FBI’s most recent “Hate Crime Statistics” report, nearly 6,000 bias-related incidents occurred during all of 2015.

Protests and other forms of free speech have made headlines, but some members of society have chosen to live by a timeless adage – “a picture speaks a thousand words.”

Cynthia Beltran-Islas, a studio art major, believes the election pushed herself and her peers to focus on political and social topics in their work.

Beltran-Islas recently partnered with a friend to produce a documentary about the day-to-day experience of people who identify as Latin American, queer, or both-a topic she’s passionate about because she places herself in both categories. A crowd gathered to watch the film and several stayed afterward to give feedback, which is something she values.

“Artists are very empathetic,” said Beltran-Islas. “We want to engage emotionally with people.”

As an immigrant from Tijuana, Mexico, Beltran-Islas said she has always felt self-conscious in the U.S. due to her accent and appearance. However, she admitted she feels even tenser since last November despite the fact that she now lives in San Francisco, a sanctuary city.

Beltran-Islas found a support system within the SF State art department. She noted a specific moment in a sculpture course last fall taught by Michael Arcega. She said Arcega took time during the first class after the election to gauge and discuss the students’ mental and emotional well-being.

Arcega did so because he “felt a paradigm shift.” Although he has his own strong beliefs, he never wants to impart them on his students. Instead, he utilizes a particular ideology.

“My role as an artist and teacher revolves around ‘social sculpture,’” Arcega said.

He believes that every action within a society has an impact on it. He knows that not every student will share his outlook, but he encourages them to engage in substantial endeavors.

“Being a constructive individual, rather than a destructive one, is important to me,” Arcega said.

Vyshnavi Aysola, a digital art major, is doing her part by challenging “Western” stereotypes. She has begun creating an interactive map focused on Indian independence. She plans to have several icons across the map that will contain information about the length and intensity of British invasion for each particular area.

While Aysola said she hasn’t experienced any personal Trump-related attacks, she empathizes with people like Beltran-Islas.

“Sometimes it feels like we’re all competing with each other, to showcase ourselves as the better artist,” Aysola said. “But we really need each other.”

Christopher Statton also thinks unity is the answer for the rhetoric spewed by Trump and his supporters. Statton is the co-director of the Clarion Alley Mural Project or CAMP. Clarion Alley is a side-street in San Francisco’s Mission District that doubles as a canvas for artists to express themselves.

One of the murals on display is “Cultivating Resistance,” which Statton painted a majority of. According to CAMP’s website, the mural depicts Twitter birds coming from Trump with negative terms written on them, burst oil pipelines and Steve Bannon in a KKK hood. All of them hover over citizens protecting a tree, which symbolizes every branch of the country that is currently being threatened, such as education and the environment.

Statton worked on the mural alone most of the time, which he said gave him the opportunity to talk to people who passed by. He wanted to find out what the public wanted to see, and their thoughts inspired the final product.

“It was a group effort that showed community solidarity,” Statton said.

De La Rosa believes that using your voice will help attract like-minded people, just as Statton did. However, he also thinks that hearing all sides of an argument is important. He said it’s his job as a professor to facilitate free expression and show the students different ways to receive and broadcast information.

“I like art that isn’t didactic or one-sided, but creates discussion,” De La Rosa said. What he values the most is art with an impact.

“Art is omnipresent,” De La Rosa said. “It continues to speak when you’re not there.”