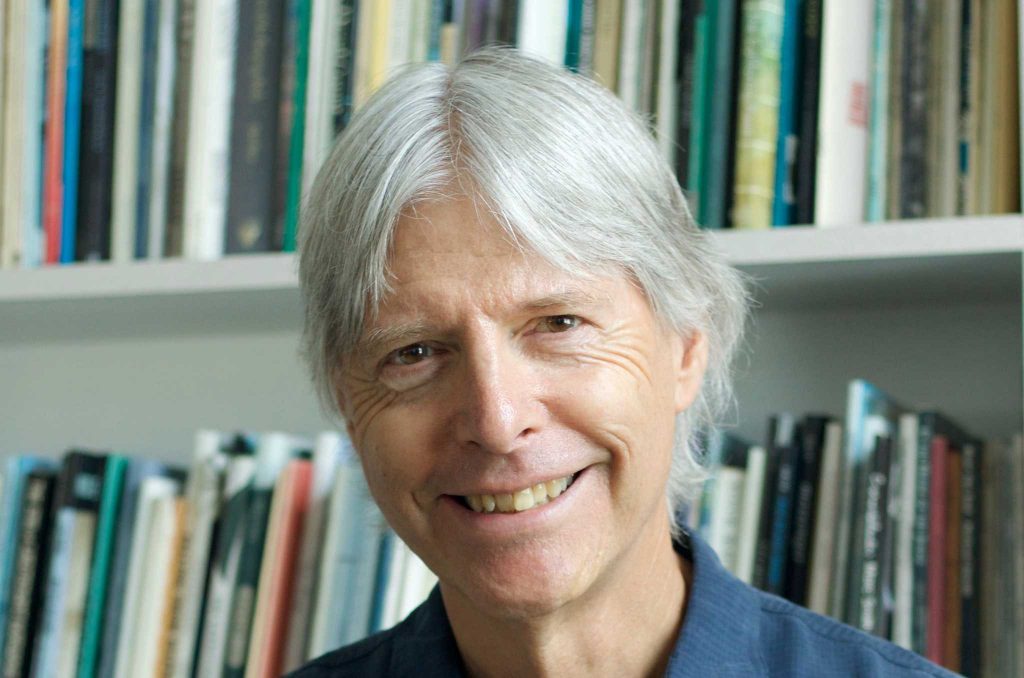 Andrew Joron poses for a portrait in the Humanities Building at SF State on Monday, September 11, 2017. (Oscar Rendon/Golden Gate Xpress)

Joron has been teaching at SF State since 2014, working primarily with graduate students. Prior to teaching, he was a science-fiction novelist with a lengthy and impressive body of work dating back to 1987 when his first book, “Force Fields,” was published.

“The Absolute Letter”, released March 16 2017, is a poetry composition containing similar science-fiction themes. The text is meant to explore the cadence, texture and density of language with a surrealist lens.

His unique work, influenced by his background, blends the artistry of poetry with the exploration of science fiction.

By his own admission, the strange literary path he took influenced the nature of his work. He shifted from narrative fiction to poetry and now experiments with a hybrid of the two.

“I had a strange, unusual itinerary as a writer. I started out as a science fiction writer and then morphed into a poet because I became obsessed with the textures and the densities and the qualities of language and less interested in plot and character,” he said.

Fellow SF State professor Paul Hoover, who has known Joron for 20 years, identified wordplay as one of the themes of his writing. “He’s playing with words, but the real awakening comes when you look on the page,” he said.

“I also feel like there’s something beyond the human, especially in poetic language that too often our language is constrained by personal concerns or social concerns but there’s also another dimension to language that I call the cosmic dimension,” Joron said.

Joron also mentioned the connection between poetry and music as inspirational factor. “Words relate to each other in a non-linear, non-referential way,” he said. “That’s very close to the condition of music.”

Surrealism is an artistic cultural movement that was in high popularity during the 1920’s with the work of Salvador Dali, Andre Breton and other similar visual artists. Surrealism in literature was very popular in France around the same era, and some of its themes have persisted throughout fiction writing today.

“His work is philosophical to me … it’s given to thought more than it’s given to image,” Hoover said. “He’s very playful as a poet. To me, he’s like a playful philosopher.”

Joron also mentioned the connection between poetry and music as an inspirational factor. “Words relate to each other in a non-linear, non-referential way,” he said. “That’s very close to the condition of music.”

“Andrew Joron’s poetry inhabits the rich nexus between the real, the imagined, and the possible,” she said. “His keen metaphysical explorations have an uncanny way of showing us our own reality anew.”

She referred to his work as “intellectually thrilling, philosophically urgent, and deeply compelling.”

“Music comes through as a rhythmic undercurrent, as it does in the best of poetry,” De Robertis said.

His infatuation with language is another powerful theme in his work. “The emotions and the turbulences that poets find in language are closer to the kind of turbulences we see in spiral galaxies or collapsed solar nebulae and for me that’s a cosmic connection that poetry has above all other forms of language,” Joron said.

He describes his story, in part, as very “sound driven” as experimentation with homophonic sounds is extremely prevalent throughout “The Absolute Letter.”

“The sound is driving the meaning,” he said. “It’s a sound experiment that only becomes apparent on the written page.”