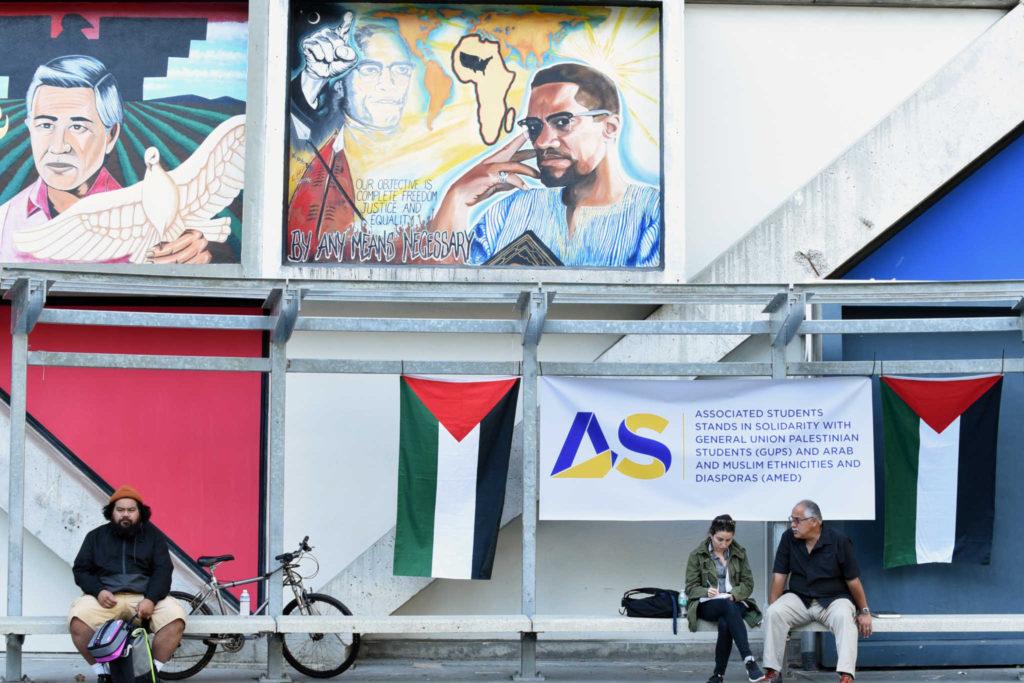 The posters, distributed by the David Horowitz Freedom Center, an extremist zionist organization that has no affiliation with SF State or its clubs, implicated that Abdulhadi had been involved with “terrorism” acts. This has been the third time SF State has had posters that attacked the Palestinian, Arab and Muslim community on campus.

Abdulhadi and the General Union of Palestinian Students (GUPS) are frustrated this has happened again and have seen no extra precautions or procedures implemented by President Leslie E. Wong or the University Police Department to prevent it from happening another time.

Abdulhadi did receive a call from the UPD Police Chief Jason Wu explaining to her they are “here for you [her].”

In an email, Wu was asked how he planned to keep Palestinian students and faculty safe, to which he replied he is willing to meet in person with Abdulhadi and GUPS “in hopes to develop a safety plan for individuals who have concerns for their personal safety.”

As for the posters themselves, Wu said he is treating the latest incident like “previous flyer incidents.”

“UPD reached out to the David Horowitz Freedom Center regarding their offensive flyers that has caused great disruption to our campus community,” Wu said. “We are asking anyone with additional information, particularly the exact location where these latest flyers were found, to contact UPD.”

Abdulhadi said that Wu acted similarly on Oct. 15 of last year, when the posters first started appearing.  Abdulhadi feels that the previous posters were kept up for a long time and was not addressed in a timely matter. Abdulhadi thinks the UPD and Wong are not doing enough to notice or respond to posters efficiently, nor does she feel protected by the UPD or the University.

Abdulhadi felt like the call from Wu was not to support her, but “to cross off a task off your [his] list.”

Dr. Jess Ghannam, a Palestinian radio host and professor at University of San Francisco, was also a victim of the defamatory posters. Ghannam was depicted right next Abdulhadi in one of the posters that had the words “Terrorism Supporters” in large, white capitalized letters.

“I’m a little disappointed on how San Francisco State handled this,” said Ghannam. “When this happened in Berkeley, the president issued a statement within 30 minutes for the removal of these posters. I worry about Rabab, GUPS and other students that are not safe– these posters incite people to violence and create hostility.”

The lack of institutional support also attracted the attention of students, specifically Associated Students, Inc. (ASI) who organized with GUPS and Black Student Union (BSU) to show their disapproval on how the campus administration has not become transparent with their stance to recent incidents. The group came together the morning after the posters were dispersed and hung posters and signs that said “protect Palestinian students” or “hate speech is not free speech,” around the campus to show their solidarity with the Palestinian, Arab and Muslim community.

The letter also urged the administration “to comply with the demands from GUPS, Arab and Muslim Ethnicities and Diasporas (AMED) and members of the Palestinian community.”

SF Hillel, a Jewish organization based in the Bay area as well as a student club on campus, distanced itself from the posters. In a letter sent to ASI, Hillel said that “San Francisco Hillel condemns these posters and the targeting of individual members of the campus community. As all students groups do, the members of GUPS and the rest of the Palestinian community at SFSU deserve to be able to speak freely without being targeted with Islamophobic and hateful labels.”

Abdulhadi responded to the support that happened last Thursday morning by saying: “The ASI statement and action was amazing. This is real solidarity. I wish that the University did the same.”