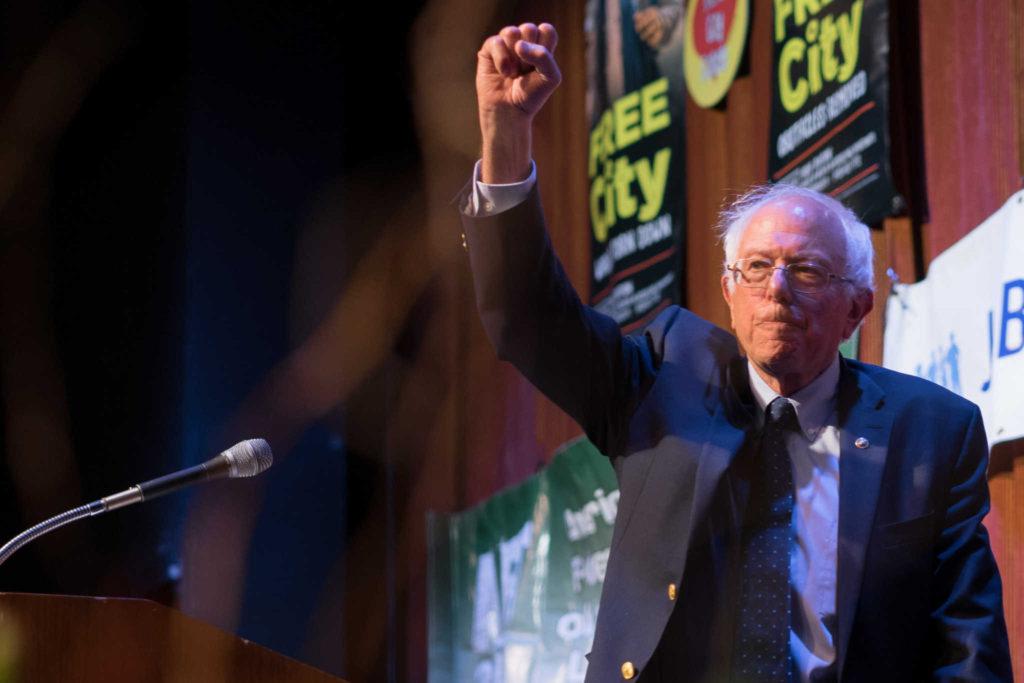 Bernie Sanders is working to make California State Universities tuition-free, just like San Francisco City College, the first in the state to do so.

Finding standing room to see Bernie Sanders in the 304 max capacity Diego Rivera theater at City College of San Francisco in Friday was almost as hard as finding a parking spot on Holloway.

The theater was overflowing with students, teachers and ‘Feel the Bern’ supporters to hear Senator Bernie Sanders speak. For the hundreds of people who couldn’t squeeze into the theater, a tv-lined room next door filled with the overflow as well as loud speakers outside for those who couldn’t make it into the second-hand room.

As the music built up while the clock ticked away to the 3:30 p.m. start time, the speaker line-up did the same: From CCSF board of trustees to students who currently attend, followed by District Supervisor Jane Kim who introduced Sanders to the stage.

Sanders spoke of Trump and “his friends,” but continued with the same optimistic rhetoric of what America can become with the guinea pig city of San Francisco.

Many students at SF State have been forced to work full-time and part-time jobs to pay for their tuition, becoming super-seniors and struggling to graduate on time.

“I’ve basically had to work part-time and I’m also saving up money, using credit cards to pay for things so if there was free tuition it would have helped me a lot to not rack up so many bills and not struggle as much,” Andy Rodriguez, English-Literature senior, said. “I’ve been in school for five years and it’s because of that.”

While a tuition-free SF State is still in the distance, it isn’t on the backburner after CCSF has proven higher enrollment rates and an opportunity for people from less privileged backgrounds to receive a higher education.

“City College of San Francisco is a place of second and third chances,” Alisa Messer, English professor at CCSF, said. “Education is a human right, we think they deserve it for free.”

Students who have received those second and third choices included speaker Teddy Toliver, who came from a pipeline of incarceration and is currently enrolled at CCSF and on track to attend SF State next fall.

“I didn’t know where I wanted to go, I just didn’t want to go back to where I was from,” Tolliver said. “It’s been a long road, I thank City [CCSF] for allowing me to be able to dream for the first time in my life.”

Free City College is not a new idea, it took years to put into place in San Francisco and is now used as a guinea pig for other California community colleges.

After 1984, community college in California was no longer funded and proposition 13 was put in place which stripped K-14 public schools of operational costs. This was the beginning of the spiral of increased tuition at the community college level.

All San Francisco residents are applicable to enroll in a free education at CCSF. But, there are still minor fees outside of unit cost such as health fees, web registration fees and course material fees.

Free City college was announced on Feb. 6, 2017, which accumulated to $5.4 million in covered student tuition with extra fees put aside for those in deeper financial need. Sanders and the prequel of speakers insisted that a public college education is as important as free K-12 public education.

As Sanders continued his speech, he pointed out the possible struggles to come if the idea of free public university is not implemented.

“Good jobs require more and more education. It is our job as a nation to understand that public education can no longer mean first grade to twelfth grade,” Sanders said. “Our job now, when we talk about free public education, is to make certain that we are talking about making public colleges and universities tuition free.”

Two weeks ago, a bill, AB-19 was presented of Gov. Jerry Brown to waive fees across the state for city college tuition. This might be the first step toward a state where public university is tuition free.