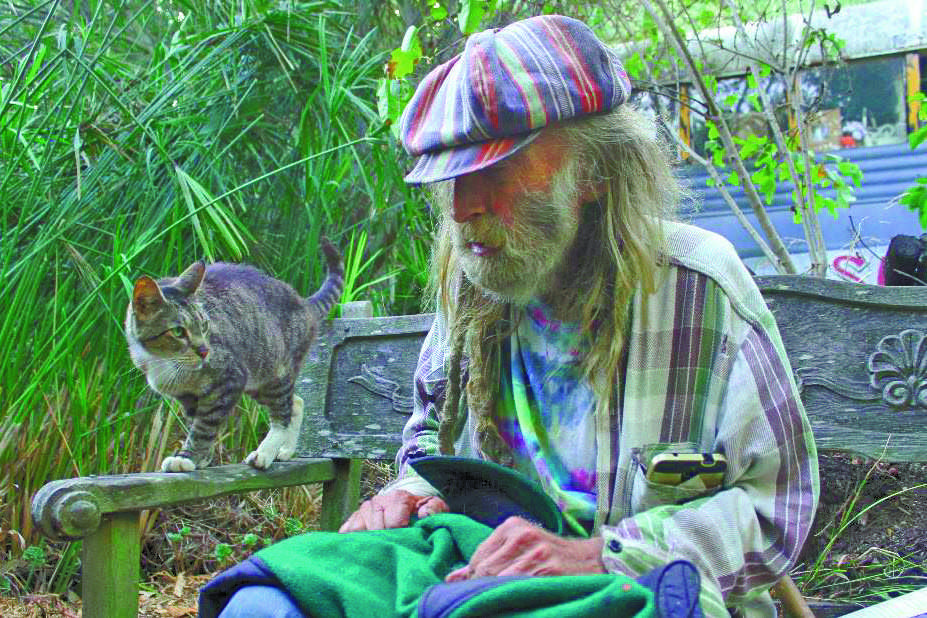 In 1956, there were tales of all-night parties and free love radiating from the streets of San Francisco. Artists, poets, writers and musicians from around the country were drawn to the city like moths to a flickering flame. The youth who flocked here would leave a mark on San Francisco that would forever characterize this city.

“Diamond” Dave Whitaker was one of those kindred kids. At 19, he hitchhiked from Minnesota to San Francisco in 1957 to join the growing community of bohemians called “the Beatniks.”

When he arrived in San Francisco, Diamond Dave met a group of authors who were beginning to receive nation-wide fame. Jack Kerouac, Allen Ginsberg, William S. Burroughs, Neal Cassady, and Lawrence Ferlinghetti were all living amongst the burgeoning Italian immigrant community in North Beach. A talented writer and poet, Diamond Dave became fast friends with “the Beatniks’” most prominent writers.

“I was a bike messenger by day,” said Diamond Dave, “and a Beatnik by day and night.”

Ferlinghetti opened City Lights Bookstore and Publishing in 1956 and printed the “Beatniks” literary works. With themes of anti-conformity and rejection to materialism, this group of authors gave voice to the counter-culture movement. Kerouac’s “On The Road” helped inspire the hippie movement of the 1960s.

Diamond Dave left San Francisco to travel to Israel and Europe in the beginning of the ‘60s. Before he started this journey, he made a pit stop at home to see family and friends in Minneapolis, Minn.

There, he met up with a young 18-year-old, Bob Dylan with whom he shared a copy of Folk Singer Woody Guthrie’s autobiography “Bound For Glory,” and told him wild tales of hitchhiking across the country to San Francisco. During this encounter, Diamond Dave says “he turned Bob Dylan onto pot.”

Professor Peter Richardson teaches a class on the history of San Francisco at SF State. On the first day of class this semester, Diamond Dave walked through the door hoping to crash the course. When Diamond Dave started questioning Professor Richardson about his knowledge of San Francisco, Richardson did some research into Diamond Dave. “Soon as I left class that day, I went home and went through Bob Dylan’s autobiography and sure enough, his story checked out,” said Richardson.

When Diamond Dave returned to San Francisco at age 22, he continued to use his gift of language and poetry to bring people together.

In 2005, Diamond Dave sat in Alamo Square Park, looking at City Hall, and thought, “what a beautiful place to read poems.”

He founded “The Poetry Under The Dome Event” that same year.

A man of the microphone, Diamond Dave hosts a show on Mutiny Radio every Friday called “The Common Thread Collective,” and helps feed the homeless for “Food, Not Bombs,” a non-profit organization that provides nourishment for the hungry. He was a vocal advocate for San Francisco Community College in its fight for accreditation.

For his lifelong commitment to the city, the San Francisco Board Of Supervisors recognized

“Diamond Dave has written spoken word, organized protests, and taken direct action in support of the innocent, the downtrodden, the disabled, and all of those who suffered the unfairness of our social system, which is in dire need of change,” said Board Supervisor John Avalos in a speech at City Hall posted online.

“The more you learn about Diamond Dave, the more you see him in the character of San Francisco,” said Clayton Peters, a spoken word poet and friend.

“I’m taking a course about zombies,” said Diamond Dave, “because if you don’t speak up and use your voice, you’re a zombie.”

He’s excited about being back in the classroom and turning 80 in November. The last time he attended a state university was “briefly” in 1958 at the University of Minnesota. Despite 50 years of going against the grain, Diamond Dave knows the value of education.

“Learn to love. Love to learn. This never ends,” is the slogan Diamond Dave wrote down on his 79th birthday.

To this day, Dave is as exuberant about life as the kid who hopped in the back of a pickup truck and hitchhiked to San Francisco in 1957.

“I didn’t know who Diamond Dave was when I saw him walking into my class with a stick, but Professor Richardson was very enthusiastic about meeting him,” said Lianne Dusseldorp, a SF State Student. “History of San Francisco probably wouldn’t [be] a very useful class for him. He could teach it.”