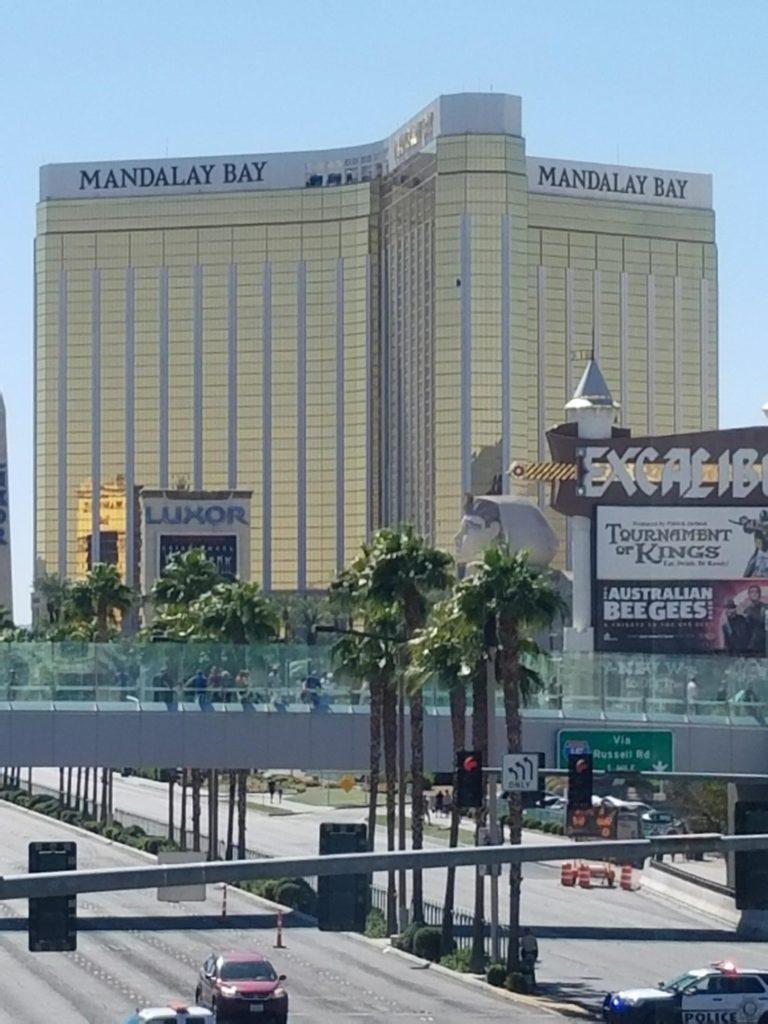 A view of the Mandalay Bay Hotel, where Stephen Paddock fired down on the crowd from the 32nd floor. (Haley Perry/Golden Gate Xpress)

For one survivor, SF State alumna Christine Antekelian, ‘10, only one thought remained still amid the panic — to get her cousins to safety.

“They’re my little ones. I’ve got to make sure that I watch out for them,” Antekelian said.

Antekelian often frequents the country music festivals across California and in Las Vegas. She thought the trip would be a good time to bond with her two younger cousins, who are in their early twenties. Antekelian’s cousins were joined by their sister and sister-in-law.

It was the girls’ first time to “really see Las Vegas.”

The quintet was tired after three days of music, but carried on till the end to catch headliner Jason Aldean’s set. The crowd surged forward to get a better view.

“Everyone rushes to get in as close as possible to the stage. When you’re in the front, you’re packed like sardines,” Antekelian said.

Her group, however, stayed back, waiting in the middle of the crowd where there is room to dance and easier access to exits.

She remembered it starting as Aldean began his fourth song.

They thought it was the speakers at first, just a technical malfunction. No one realized what was happening. The band hesitated, but kept playing.

“It was the second [burst of rounds] that came through, I think that one of the first few bullets hit the speaker and created a sound explosion,” Antekelian recalled.

“All of a sudden there was the next round [of fire], that’s when we knew we were being shot at. We didn’t know where the bullets were coming from.”

A raised VIP section was set behind the group, along with its own exit in the back of the structure.

“If we can’t escape we’re hiding underneath the VIP station, that’s what was going through my head at the time,” Antekelian said. “Just that I have to get the girls to safety, some way, somehow. I’ve go to get them to safety.”

Unsure of where the bullets were coming from, the crowd started to run.

“I grab the girls. We hold hands,” she said. “I’m pushing them, trying to get them to the VIP. There’s this panic and chaos starting to happen by then. There’s a few seconds of pause for the reload, then the next round starts.”

As soon as the next burst of fire begins, the group, along with the crowd, drop to the ground. Everyone is shoulder to shoulder, everyone is pushing.

“At this point you could hear and feel the bullets flying around you,” said Antekelian.

Amid the panic, Antekelian was pushed to the right by a man trying to escape. Just after he nudged her, he was shot in the shoulder. The bullet, she said, would have hit her.

“I can’t even stop to help him. The girls are freaking out — thank god they haven’t seen anything. They just know bullets are coming and we have to get out.”

The crowd rushed for the exits with every lull in the intermittent, but seemingly endless stream of automatic fire. Antekelian and her group jumped up to run during each pause in fire, only to dive to the ground after just a few hard-earned steps. Over and over, they duck with the crowd to avoid the bullets coming from the 32nd floor of the Mandalay Bay Hotel.

“I think someone behind me got shot, and he fell on top of me. My hand slipped from my cousin’s hand and I yelled ‘Go behind the VIP! Go behind the VIP!’,” Antekelian said. “I tried to stay up. I hesitated to help this guy. I fell and almost got trampled over. I got up and kept trying to push forward to get to the girls.”

Antekelian caught up with her group, and directed them to a side exit she had noticed earlier in the festival. They ran through, avoiding the crushing demand at the main exit.

She found herself on a small side street where three police cars now sat on the center divide. An officer attended to a wounded women lying on the ground nearby.

Shots rang out again, forcing the group to take cover behind the police car.

They ran down the street, what Antekelian thinks was East Reno Avenue, and came across a motel.

“You could see people opening their doors, trying to get festival patrons in their rooms to take cover,” Antekelian said. “We kept going to get as far away from it as possible.”

The group continued to run, eventually coming to a hotel lobby for shelter, but soon ran out again as someone incorrectly claimed the shooter was in the building.

“I pulled the girls, trying to get them to go the other way,” Antekelian said. “And that’s when I saw another body drop.”

They ran out across the adjoining parking lot, still in a large crowd, and reached a chain link fence.

“Before this point it was everyone for themselves. They’re just trying to get to safety, but now everyone starts helping each other,” she said. “A group of us bring down the chain fence onto the trees and bushes there.”

The crowd then helped its number, one by one, cross the fallen obstacle.

Antekelian still didn’t know where the bullets were coming from, but felt they came from above. She saw that Topgolf, a bar and driving range, was letting people in. They were now about a mile away from the festival venue.

“There was an employee’s side door,” Antekelian said. “We can barely breath. They were going to close the door on us. I was like ‘Please please please I can’t make it I have a bad back. I really can’t make it up the stairs!’, so the guy left the door open and we ran in.”

The group, along with several others, barricaded themselves inside the employee locker room. It was 10:30 p.m.

While running through open lots and side streets, Antekelian had made sure her cousins kept moving, telling them to hold back the tears and focus on getting out.

“Once we saw we were kind of safe, I let them just let go,” she said. “If you need to cry, cry now. This is your time. Get it out of your system.”

The group was on lockdown in Topgolf until 1 a.m., where the employees did everything they could to help the survivors.

“I can’t emphasize this enough: Topgolf employees were amazing,” Antekelian said. “They were trying to take care of everyone. One of the managers was able to get information from the police metro and would give us updates while we were inside their locker room.”

Antekelian and her cousins didn’t get back to their hotel room until 3 a.m., and offered a couple who took shelter at Topgolf a place to stay with them, as some hotels were not yet considered safe.

“Common sense saved us,” she said. “Everything we did was common sense.”

Still, she wishes she could have done more.

“I tried to shield them from as much as I could…,” Antekelian said. “I talk to them a couple times a day to see if they’re ok. Time will tell, and time will also heal.”

The words “Welcome to Las Vegas,” joined now with 58 crosses, remain, as with its people, undeterred.