Camaraderie of comic club is something to marvel at 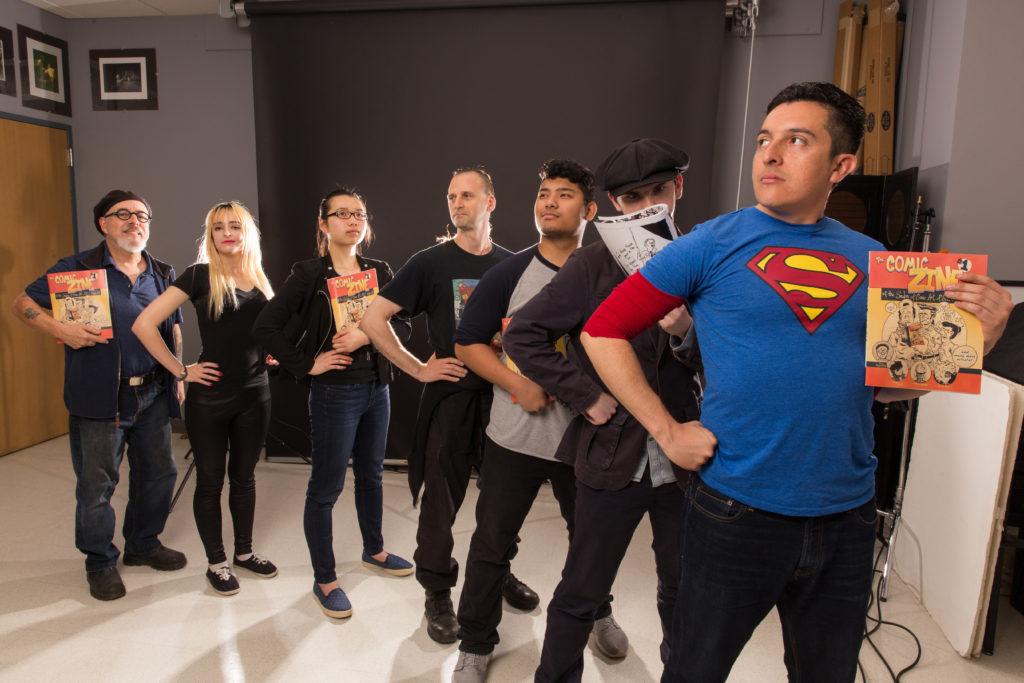 Members of the Salon of Comic and Cartoon Art pose for a photo in the Humanities building at SF State, Friday, Sept. 29, 2017. (Travis Wesley/Golden Gate Xpress)

The grandeur and heroics are always enticing. They leap from one building to the next, some more gracefully than others. But the appeal of them is for helping the common citizen, the watchful protector.

Comics have a special place in American culture. Starting out as the foundational depiction of what “good” means in our society, its moral depiction has remained despite its evolution as an art form.

At SF State, there’s a prevailing appreciation for the out-of-the-ordinary, and the Salon of Comic Arts helps bring vibrant color to that infatuation.

The Salon of Comic Arts, started last year at the beginning of the fall semester, was established as a way for Jon Pogorelskin, founder and club advisor, to share his graphic arts expertise with the student body.

Pogorelskin, who works in the facilities department on campus, worked in the graphic design and illustration industry for three decades before coming to SF State.

“I had an idea that I wanted to share my background, my experience, and my expertise in comics and graphic novels with the student community,” he said, explaining why he started the club.

The nature of comics, being both visual and written, gives it a unique ability to tell a story, and this rare power is not lost on Pogorelskin or the club members.

“I think it’s an excellent medium for interpreting in ways that really no other medium can do … With comics, a printed static page, you can examine it and go back and reexamine it.” Pogorelskin said. “Plus it’s wide open as far as subject matter and how you can disseminate information through the printed page. For me, it’s the ideal way to disseminate information and philosophies.”

Yunha Kim, a 21-year-old creative writing major, is the president of the club. She echoed the appreciation of comic’s unique communicative ability.

“What i’ve found is that people use their comic’s characters not just as their speakerphone or whatever; it’s a reflection of all your complex emotions … You can show them in a complex scene, you can convey your full range of emotions in that one panel,” she said.

“Comics work really well as an emotional outlet because it uses text and illustration together to tell a narrative in a way that they wouldn’t be able to achieve separately,” she said. “Having just a picture or just text might not portray the full range of emotion and storytelling that an artist might need.”

Kevin Catalan, a 20-year-old studio arts major, is the club’s treasurer. His focus is keeping the club’s money safe and circulating.

He explained that the narratives of comics has changed, reflecting a change in the social atmosphere.

“I’m not sure what it’s heading to, but the changes I’ve noticed, it’s becoming more socially involved, more political. Instead of a hero against a villain, it becomes superman saving immigrants,” he said. “It’s not political cartoon, but it’s another way for artists to convey what they’re feeling.”

Yunha’s background with comics stems from millennial adventure classics like Pokemon. “My personal background pretty much begins with watching cartoons like My Life as a Teenage Robot, Pokemon, Avatar: The Last Airbender and anything else from the early 2000s on onward,” she said.

Her enjoyment from a fan perspective quickly led to pursuing the passion for comics from a producer perspective.

“I drew a lot of fanart for those shows and my mom is an art teacher and has always encouraged me to draw, so naturally I’d find my way into drawing comics at some point after experimenting with different art mediums,” she said.

The fandom of comics that took hold of younger fans via the internet has created a, as Yunha put it, “niche” community, stemming from a lack of representation.

“I’ve also grown up to love a lot of webcomics, and those have inspired me to take on my own webcomic project some day,” she said. “I spent an embarrassing amount of time on online Pokemon forums all throughout elementary and middle school. But I did make some great lifelong friends along the way.”

The camaraderie Yunha talked about was something Samantha feels as well. “Finding friends and artists who share my interests has been really great, especially because I’m from [Southern California] and making friends has been a little difficult since moving to the Bay Area. Being able to share ideas with people who are also working toward their own goals is really inspiring.”