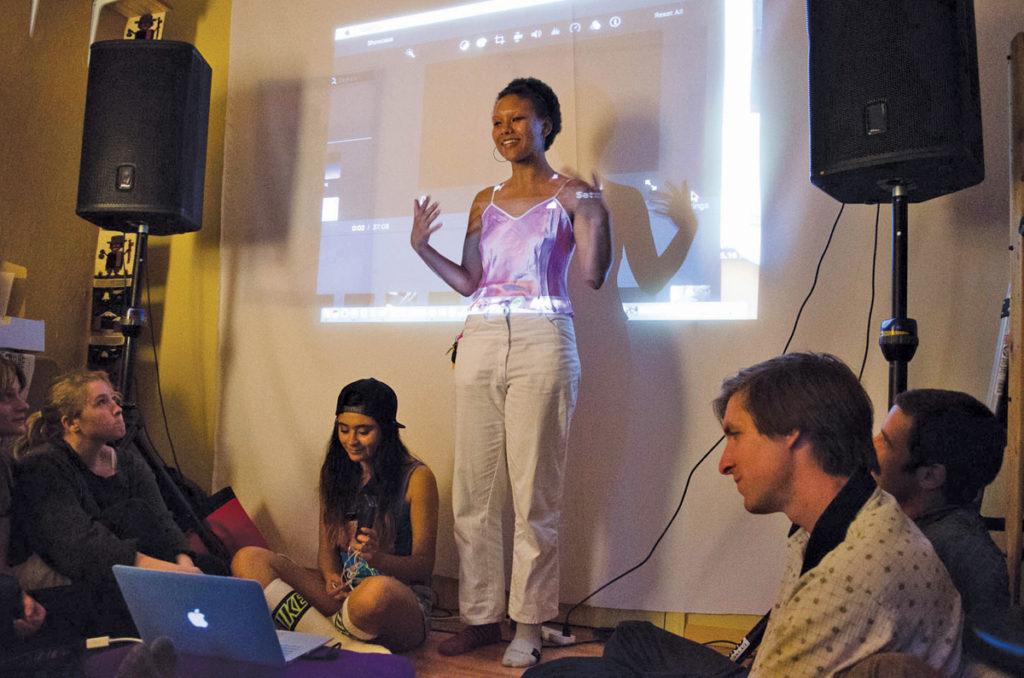 Art and activism were prevalent at a SF State student-curated show in the Mission District.

Jules Retzlaff, a cinema major, and Lilith King-Smithson, an Africana studies and multimedia double major, put together their second art and social event at Heartspace, a community development center. Heartspace is a membership-based rentable unit for “local healers, teachers, artists and activists,” according to the website.

They started with a short-film screening followed by an art vending period. Retzlaff and King-Smithson were overwhelmed by the amount of attendees because of the small space, so they made the decision to only divulge the address to RSVPs.

“It’s awesome because, even if people couldn’t be directly involved, they were involved through coming and creating the environment,” said King-Smithson.

Retzlaff, who identifies as they/them, reinforced King-Smithson’s statement, saying that everyone who attended the event is part of the community they’re building, whether an artist or not.

“Our community is people who care about San Francisco culture,” Retzlaff said. “People who are interested in areas focused on ‘artivism,’ like gentrification.”

Retzlaff emphasized how important it is to them to help retain San Francisco’s diversity, charm and uniqueness. As a person who lived in the city since they were a toddler, they said they have witnessed the entirety of the steady change. Retzlaff said the objective of the event is to not only provide a space for artists to express themselves, but also “fight back against those pushing us out.”

“Developing art alongside activism is what makes a movement,” Retzlaff said.

The appreciation was palpable from both Retzlaff and King-Smithson. When asked afterward what their impressions of the event were, both let out streams of positive thoughts. They spoke simultaneously, but seamlessly acknowledged each other’s statements. As friends of three years who share a passion, they were clearly in sync.

King-Smithson believed the event would have been worthwhile if people had simply shown up to see the art on display. However, she was excited to see a lot of art purchased and hear from some friends who discussed collaborating with people they hadn’t met before. She also credited Africana Studies with helping her utilize this event to its fullest potential.

One of the artists who had a film shown appreciated the opportunity and environment. Elizabeth Hewlett, a self-described “crazy camera lady,” showed “Missing Part of Me,” a first-person documentary of her trip to Nicaragua. Hewlett’s documentary has been displayed at venues like The Roxie and the Castro Theater, but she was equally excited to have it projected onto a sheet in the intimate confines of Heartspace.

“I’m so proud of Jules and Lilly,” Hewlett said. “They’re such amazing artists, and they’ve inspired my work as well.”

King-Smithson was overjoyed by the amount of positive feedback she received at the Oct. 7 event. She said a lot of people signed up for their email list as well, showing that those who attended are interested in future events. The community she and Retzlaff seek to attract seems to be forming.

“I really need love,” King-Smithson said. “I like to surround myself with people who reciprocate my love.”