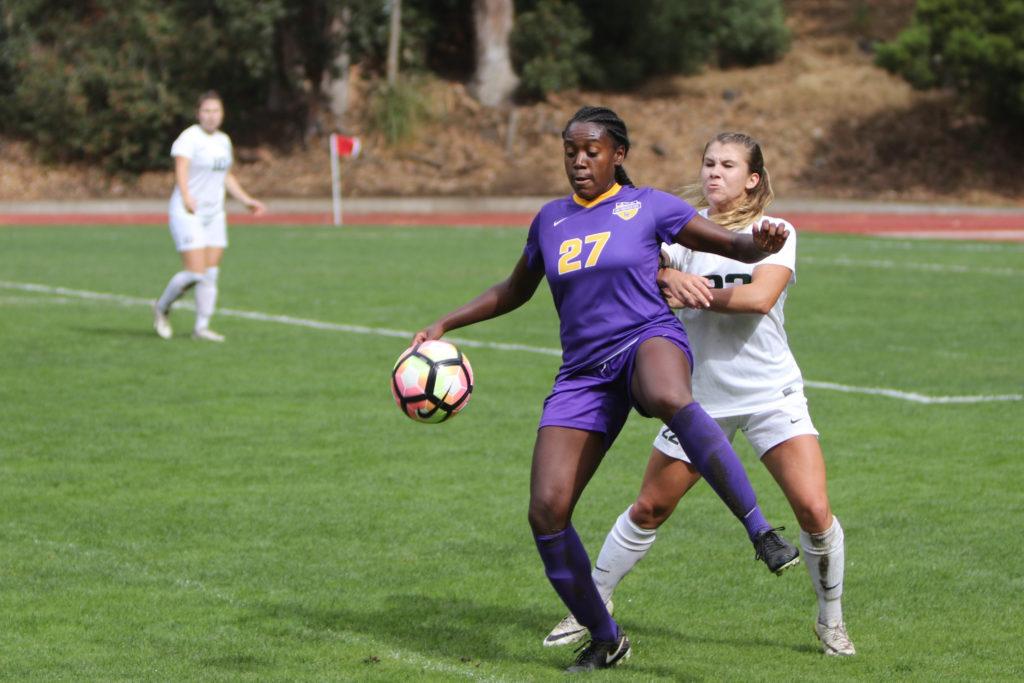 Bianca Lowe (#27) tries to get around a defender during a soccer game against Cal Poly Pomona Broncos at Cox Stadium on Friday, Oct. 20, 2017. (Oscar Rendon/Golden Gate Xpress)

Over 200 fans in attendance at Cox Stadium witnessed a nail-biting match Friday Oct. 20, where the San Francisco State University Gators (9-4-2) hosted the Broncos (9-5-2).

A handball inside the goalkeeper’s box by a California State Polytechnic University, Pomona Broncos’ player, awarded a penalty kick to the Gators, with three minutes left in the match and down by a goal.

Senior Gator Laura Shea took on the challenge to equalize the match and send it to overtime.

Both squads came out firing in the first half. Three minutes into the match Senior Bianca Lowe had the first opportunity to put one in the back of the net but missed by a couple inches to the right of the frame.

Defensively in the first half, both teams had walls defending their goalkeepers with SF State allowing only 3 shots and the Broncos allowing 1 shot.

“I think the defensive held their own and we were able to stay strong,” freshman Janessa Staab said.

The match could have swung either way since both teams had very similar playing styles with an open formation and a lot of passing and relying on through balls for scoring chances.

“I thought we had some really good chances in the first half,” head coach Tracy Hamm said. “As for the second half it didn’t go our way we came out flat.”

The Gators might have had one too many oranges during halftime, because for the first part of the second half they were less physical and aggressive. The Broncos took advantage of that by outshooting the Gators and scoring in the 59 minute. The goal came by a blocked shot by Senior Gator Christina Holguin and was left for a Broncos player to tap in.

Shea was substituted in at the 71 minute mark and equalized the match at ones in the 86 minute, sending the game to overtime, where neither team was able to come out victorious.

“It was a late lucky call,” Shea said. “It felt great to score that late in the game we deserved to tie this game.”

With Friday’s tie, the Gators remain undefeated at home with five victories and a tie.

“I have a lot of confidence in my team and I think they do as well,” said Hamm. “We have all the faith in the world to come with wins in the last three games.”

As for the CCAA standings, SF States stands in sixth place with three matches remaining to define if they are one of the top six teams to move on to the postseason.