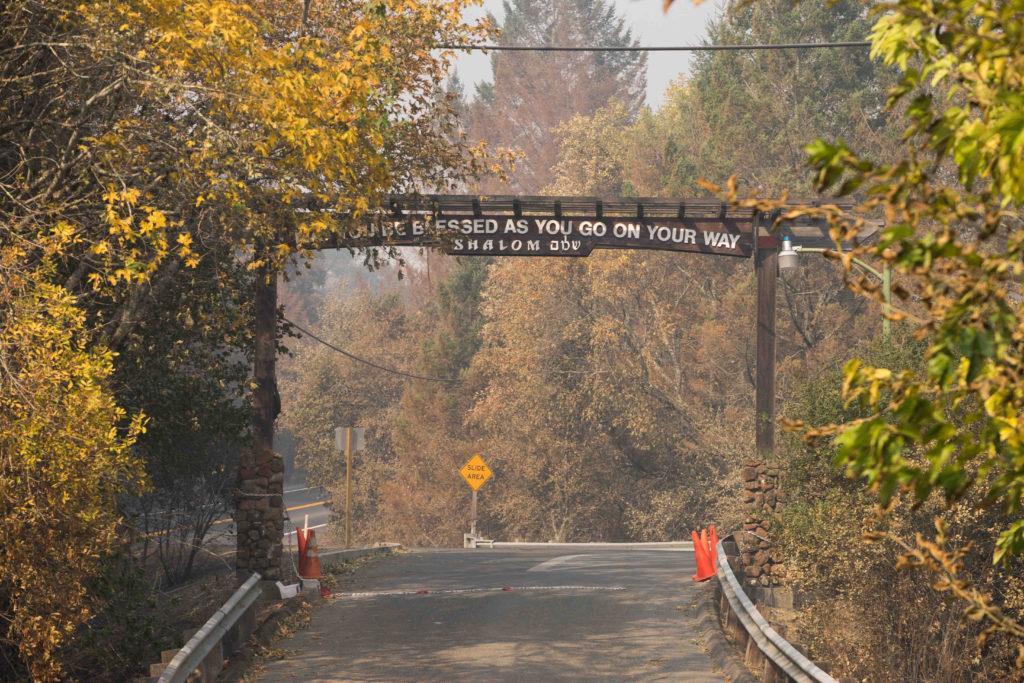 The entrance of Camp Newman stands in survival after the Santa Rosa fires on Wednesday, Oct. 19, 2017. (Sarahbeth Maney/Golden Gate Xpress)

Following the North Bay Fires, in an amazingly eerie moment of realization, a press photographer discovered that the wooden Star of David perched on a hill overlooking Camp Newman remained in perfect condition amidst acres of ash and rubble.

“The star was always the landmark and the one visual thing that separated Camp Newman from other places. It’s very hopeful. It seems to me, almost like an act of godliness,” said SF State freshman and former camp counselor, Melissa Green.

Camp officials stated that a majority of the camp was destroyed by the Wine Country fires, but the camp staff were able to safely evacuate before the fire arrived.

Camp Newman is a Jewish summer camp for people of all ages that was created by the Union of Reform Judaism (URJ). It was built off the idea of not just creating a camp, but a community. The camp serves over 1,400 people every summer, according to their website, and had just celebrated its 70th anniversary.

“I grew up there, basically. It’s a magical place. It is a huge part of who we are because it is the only place that we know of where being Jewish is normal,” Silver said. “So when we lost it, it sort of felt like someone had passed away.”

Silver went on to explain another remarkable occurrence; a shed located in the central part of the camp that contained yamakas, prayer shawls and other items of religious significance did not burn down. However, almost all the trees and cabins around it did.

When asked about what the staff knows regarding the camp reopening, she said “it’s going to be a long process because the insurance companies are just now being able to get on site and until they do their assessment, we have absolutely no idea of knowing how much insurance covers.”

If the insurance company is not able to cover the rebuilding of the entire camp, the rest will be paid through donations, according to Yoakum. Fortunately, URJ has received many donations from people all over the world, including two local children that donated all their earnings from a lemonade stand.

“The Torah teaches us that the world is a fragile place. The destruction of buildings at our beloved URJ Camp Newman by California wildfires demonstrates this stark reality,” the camp’s website said.

URJ and Camp Newman officials were not available to comment during this time. They are accepting donations on their website.