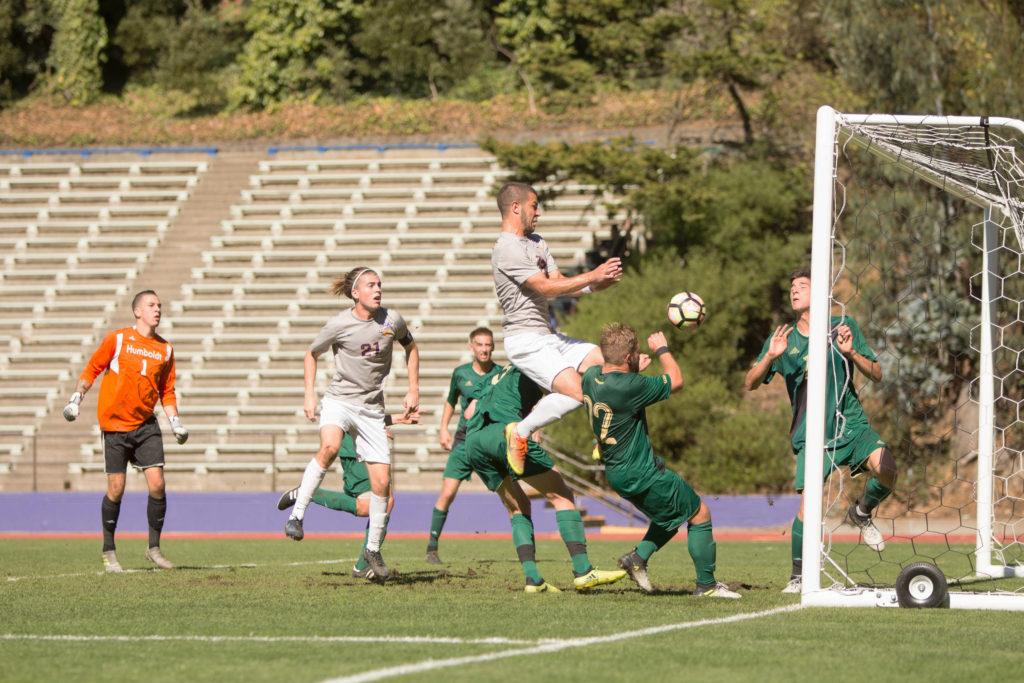 Tariq Pulskamp (#19) heads the ball into the goal against Humboldt State at Cox Stadium in San Francisco on Wednesday, October 25, 2017. Pulskamp scored his 5th goal of the season. (Mitchell Mylius/Golden Gate Xpress)

SF State men’s soccer won their second to last home game by a landslide and historical 7-1 victory over the Humboldt State University Jacks.

After the Gators won one of their two games this past weekend, winning these last two games were critical to head into the CCAA playoffs.

The Gators shot three attempted goals and one on-goal shot before the 17th minute when Humboldt State’s midfielder headered an assist, giving the Jacks the lead.

SF State knew the importance of this game and only a little more than a minute after the Jacks scored, the Gators scored with a header of their own by freshman forward Feliciano Cardenas. Sam Gebremiche assisted his shot, giving Cardenas his first goal of the season.

Junior defender Tariq Pulskamp, who headered in the second goal for the Gators, his fifth of the season, realized this coming in. His mental preparedness carried him and their team throughout the game.

Tariq Pulskamp (#19) heads the ball into the goal against Humboldt State at Cox Stadium in San Francisco on Wednesday, October 25, 2017. Pulskamp scored his 5th goal of the season. (Mitchell Mylius/Golden Gate Xpress)

“Bottom line is ‘we had to win,’ so me, along and the team, were 100 percent focused on winning the game,” he said. “We were on the front-foot the entire game, then they tired out about the last half hour and we took advantage of our chances.”

Just before the first half ended, freshman forward Clayton Sato shot a clean insurance goal just over the goalkeeper’s diving body. Their dominance remained intimidating during halftime, as shown from the continuous goals SF State made.

The Gators did not bat an eye when they got back on the field after halftime. They kept their minds on defeating the Jacks, even if it hurt Humboldt State’s chances of winning.

When asked how it felt to get his first couple of scores in this game, junior center attacking-midfielder Maximiliano Maciel said, “finally, man‑ just finally. We always play good, but today we finished.”

Maciel scored his first two goals back-to-back within five minutes of each other. His two goals came after senior forward Ranier Plantinos shot his 12th goal of the season–– only one behind the record for most goals in a single season at SF State–– and senior midfielder Daniel Herrera’s easy wide open goal.

The final score was 7-1, with the Gators plowing their competition.

Head coach Javier Ayala-Hil was proud of his team’s performance and highlighted Plantinos’ shot from the far left, a shot he’s been working on during practices. Ayala-Hil wanted to make it clear that this win was a team effort.

“My favorite part was probably Ranier’s goal. He’s been training that shot pretty much all season,” he said. “I think they played great throughout the board. To be able to score that many goals is pretty great to see especially against a tough opponent.”

The Gators’ prevailing win got them their spot in SF State’s record books as having the seventh highest score in a single game. The last time the Gators scored seven or more goals was back in 1989 with eight goals against Notre Dame de Namur.

SF State’s men’s soccer team does not have any major plans to change their tactics or playing style for next game.

“We’re just going to prepare the same. Keep a similar game plan,” said Ayala-Hil. “We’re going to tag as much as we can- that’s our strong suit- and hope we can execute in those moments.”

The Gators’ last game of the regular season before playoffs is Saturday, Oct. 28 when they face Sonoma State University on Senior Day.

Feliciano Cardenas #12 jumps to head the ball into the goal against Humboldt State at Cox Stadium in San Francisco on Wednesday, October 25, 2017. (Mitchell Mylius/Golden Gate Xpress)