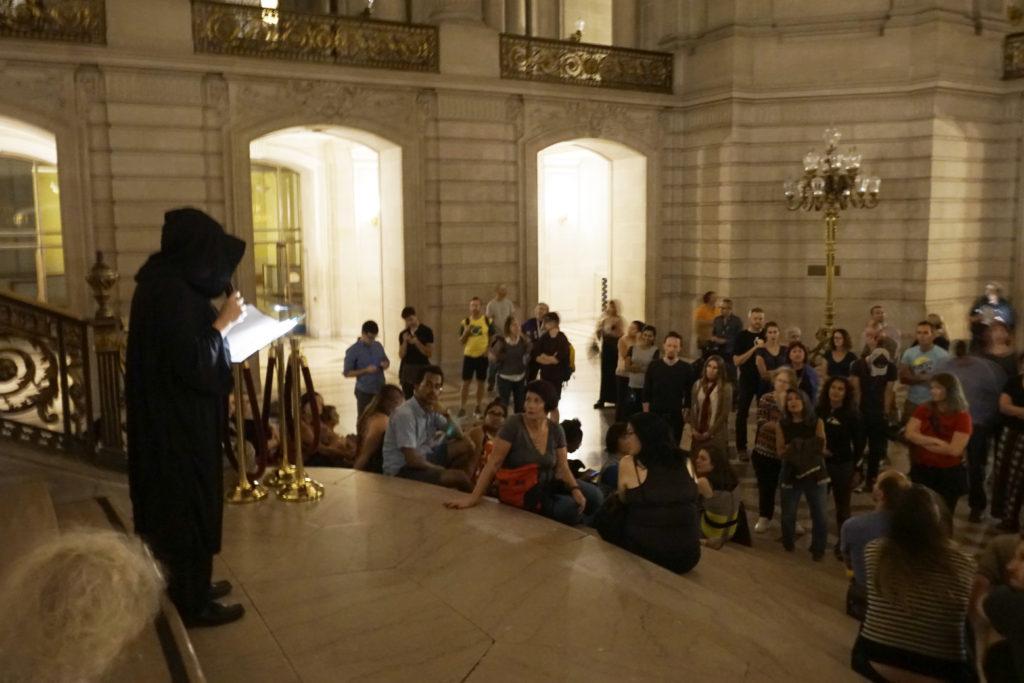 It’s easy to hear a story of a murder. It gets a little harder to swallow when you find out you’re standing on the location of the murder.

Sometimes the scariest stories are true ones.

An event called the Ghost Walk was held on Thursday night, where attendees were told ghastly tales and spooked from the history of City Hall.

Guests entering Civic Center were welcomed to a night of brooding lighting, unsettling costumes and scary stories. Greeters for the event were all in costume, including a witch and the phantom from the popular broadway show “Phantom of the Opera.”

“We’re here to teach people about spooky stories that have happened in City Hall,” said David Lehr, a volunteer for the San Francisco City Guide. “We’re a non-profit, been around for 40 years. We give free tours around the city to promote and share the city because we feel it’s a special city and to give back.”

People dressed in costumes such as Wonder Woman and Waldo were guided through City Hall’s first floor and told stories by two SF State alumni. The most shocking story of the night was a tale of mystery and murder that culminates in two attempted murders and one suicide.

Adorned in a devil costume complete with a cape and mask, Alex Streczyn-Woods, a post graduate who achieved her masters in education at SF State, was the first to tell a story that night.

“All of these stories have happened, it’s fun to hear about them,” said Streczyn-Woods. “I won’t be spooking anyone though because I will just be letting people know more about the organization and the event.”

Other storytellers told stories of suicide, paranormal activity and even the tale on Harvey Milk’s shooter. Audience members would react with the mouths wide open when hearing that the very steps they are standing on had been involved in various murders. The most dramatic story of the night was told by fellow Gator Dianne Solimena-Graham, an English and creative writing major.

“My stories are about voices that employees have heard,” said Graham. “It’s also about a brutal tale of revenge about a husband who tries to kill his wife and her lawyer but they live and he dies. But this tour and all our tours are great, really fun, if you love San Francisco, try them.”

“It’s my second year coming to the ghost walk,” said Eleanor Davis, a retired San Franciscan native. “They have put a lot more effort into the lighting this time around. It wasn’t nearly as dark and moody so I’d say it’s much better than last year. It’s a fun time. If you’ve never been to city hall, this is a definite must.”

The event is an annual experience. Everyone is welcome to join and encouraged to dress up in costume and join the business of spooky storytelling.