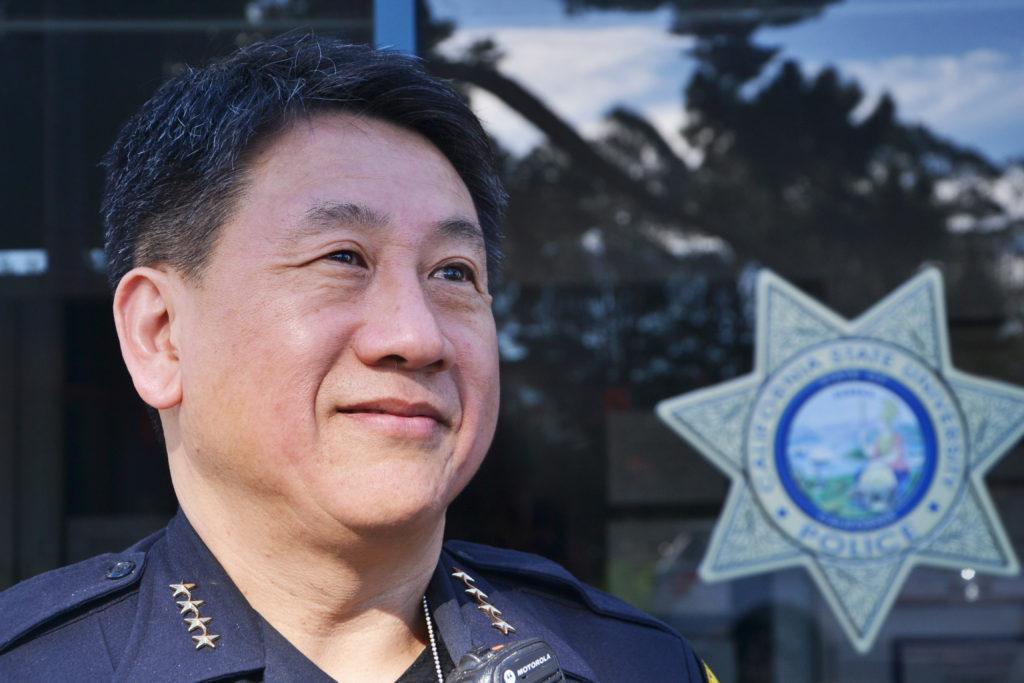 For many years, Jason Wu would dress up every Halloween as “Bingo” from the 1960s kids television program, “The Banana Splits Adventure Hour.” Today, Wu dawns a police uniform as SF State Police Chief, believing in the value of trust and saying, “we are truly here to serve our campus community.” Growing up, Wu knew he wanted to become a police officer. He said a spark ignited his interest in law enforcement after meeting a couple of police officers in his high school. Born in Taiwan, Wu is now an entire year in as SF State chief and took time to talk with Xpress about his job and his first Halloween as the department’s commander.
How would you describe your childhood to a stranger?
I came from an immigrant family. Having grown up in San Francisco, I am a product of the SF public school system. When I was little,  I spent a lot of time with my two older siblings playing imaginative games and visiting the local library. I started working when I was about 12-years-old.  I worked as a paperboy delivering newspapers along three different routes during middle school. I also worked as a busboy at a restaurant in the Noe Valley area and a store clerk at a candy store in the West Portal area during high school.
How did you get into your line of work?
Ever since high school, I wanted to go into law enforcement as I saw it as a noble profession and as a way to serve our community. I started my law enforcement career in 1988 with the U.S. Park Police, just 6 months after graduating from U.C. Davis. I retired in 2014 after 25 years of faithful and loyal service. In 2016, I applied for the Chief of Police position for SF State, and I was both fortunate and honored to have been selected.
What are some major influences in your life?
My parents play a major role in shaping who I am today.  They provided me and my siblings the necessary life skills to be successful and independent. They instilled in me the virtues of self-reliance, industrious attitude, humbleness and the importance of education and fiduciary responsibility.
What’s in the day in the life of the police chief at SF State?
I oversee three areas: University Police Department, Emergency Operations Center and Parking and Transportation.  I normally arrive at my office a little before 7 a.m.  Upon arrival, I always make a point to make the rounds to greet everyone who happens to be at the police station at the time. My days are typically filled with meetings, projects and addressing items on my “to do list.”  I normally depart the office around 7 p.m.  Prior to leaving, I make a point to make the rounds to say goodnight to everyone who happens to be at the police station at the time.
Halloween is approaching fast, have you ever not worked on Halloween as a police officer and just been a regular civilian?
Early in my law enforcement career, I have worked many Halloweens. However, I worked less and less on Halloween over the years as I promoted in rank.
Tell me about a time you and your fellow officers were in the scariest or most awkward situation on Halloween?
Generally, it is always a festive atmosphere with lots of children and accompanying parents. However, in 2000, an Officer and Sergeant were on Halloween Bicycle Patrol Detail in Parkmerced to provide a safe and secure environment to trick or treaters. The officers encountered two subjects who were drinking alcohol in public, one of which who appeared and was later confirmed as a minor. The male subject then fled on foot from officers. The subject appeared to know the area and ran through multiple courtyards and common areas of  Parkmerced. The subject was subsequently lost in the area.

Although the incident itself was scary, the scariest part was who the subject was. The subject was a known convicted criminal who had a history of violence. A few years later, the subject committed an armed robbery of an armored car employee. After being convicted and serving his sentence, he was subsequently released. A few years later, the subject shot and killed a local police officer following a foot pursuit.
Have you ever had to use your gun?
Throughout my career, I have had many instances where I had to point my firearm at dangerous suspects. Luckily, I have never had to use it to stop a threat.
What were you feeling at that time?
In instances where I had to draw my firearm during dangerous situations, there [was] a mixture of emotions that ranged from calmness to fear.  I believe this has to do with our predisposed fight/flight reaction when confronted with threat coupled with my training. This is why you always see police officers running towards a threat while everyone is running away from it.
What do you think about SF State students’ safety during Halloween and what’s the biggest concern you have?
The biggest concern that I have for our students during Halloween are health and safety related.  Alcoholic beverage consumption and recreational marijuana usage are often contributors to injury or harm among our students. There are no substitutions for personal responsibility and common sense.
What is the best advice to students who want to party hard on a school night, like Halloween falls on this year?
As a parent myself, I would never encourage anyone to party hard on any night, let alone on a school night like Halloween, which falls on a Tuesday this year. That is unless the definition of “party hard” is where good friends get together to enjoy good company and conversations but without the presence of intoxicants of any kind. The advice I would give the students would be to remain sober and smart. There is way too much at risk.