Distortion and fuzz cause a buzz 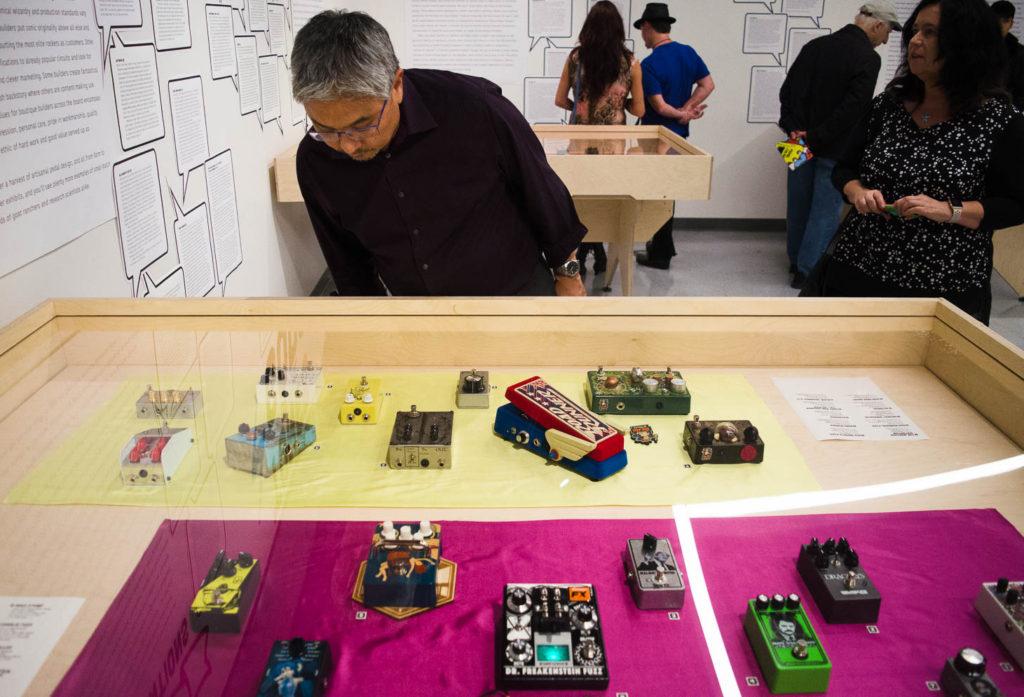 Pedal Culture is an interactive showcase that displays the history of guitar effects pedal and its impact on rock music. The opening reception was held at Design Space in the Fine Arts building at SF State Thursday, on November 2, 2017. (Richard Lomibao/Golden Gate Xpress)

Reverb and delay pave the way for the latest exhibit at the SF State Design Gallery, located on the first floor of the Fine Arts building.

Pedal Culture held its opening reception on Thursday, Nov. 2. It was curated by Ron Light, SF State anthropology alumnus from ’71.

Light spent the past year scouring Youtube channels, Facebook groups and online forums to learn as much as he possibly could about guitar effects pedals. As someone learning to play the electric guitar, Light noticed during his research and self-education process that guitar effects pedals were more than a music tool.

Light took an anthropological angle on the pedals as his knowledge about them developed. “Guitarists fetishize these pedals, in the sense that they’re viewed as mythical or powerful,” Light said. “They connect some people with their guitar gods.”

The mystique surrounding pedals is what led Light to focus his exhibit on “the guitar effects pedal as cultural artifact.” He wanted to show the history and diversity of guitar effects pedals, as well as the collecting obsession, which meant compiling a suitable collection of pedals and writing informative descriptions. Light said the most difficult part of the curation was securing all 63 pedals that ended up on display, most of which are borrowed directly from manufacturers.

However, some pedals, like a Trump-themed one, had to be purchased in order to be obtained. “I really feel like this is the moment,” Light said. “If I wanted these pedals, I had to go get them because there will never be another show.”

Pedal Culture has five glass cases displaying pedals of various designs and sizes. Along with describing the effects each pedal produces, such as reverb and fuzz, Light’s collection showcases the vast thematic spectrum. Some are dedicated to particular artists. One is hot sauce-themed, and one section is completely vagina related.

The exhibit complements visual with audio. Eight posters, featuring artists like Jimi Hendrix and Kurt Cobain, hang above individual sets of headphones. Each set plays a song from the artist and is paired with a written description of the pedal model with the type of effect created, providing an immersive example of the range of effects.

John Fedele, a property manager and ’91 SF State alumnus in business management, said he was surprised by the “sheer volume” of pedals he learned are now available. Fedele talked about  his personal use of guitar effects pedals during his high school shredding days. “I had a distortion pedal, a phaser pedal, maybe a reverb or echo,” Fedele said.

Light also provided a live demo during the reception, courtesy of Jimmy Leslie, the Fret-Section Editor at Guitar Player magazine and guitarist for nearly three decades.

Leslie set up his amplifier and myriad of effects pedals in the corner with the posters and headphones. He proceeded to show the attendees how the pedals work, tapping his foot sporadically across pedals to get distinct sounds. Leslie went in-depth, using a loop recorder to play background riffs, which he would play over with different notes and effects.

Leslie compared and contrasted digital effects equipment with old-school technology. “The digital sound got better, but the analog sound is still a thing, just like vinyl records,” Leslie said. “Pedals still have a certain kind of sweetness to them.”