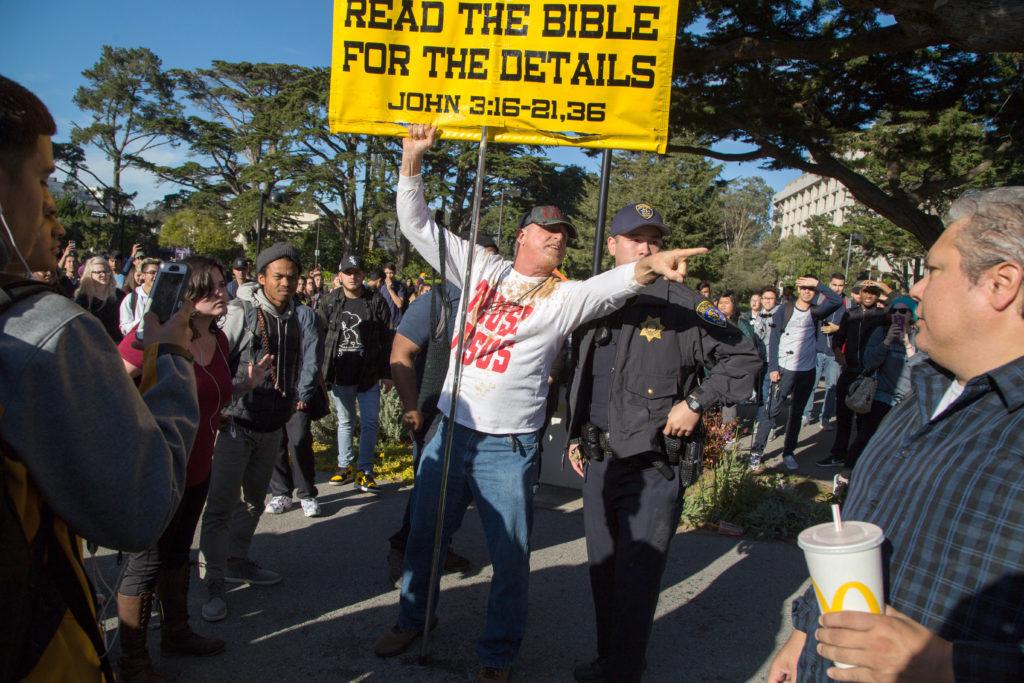 Kevin Farrer came to SF State to send a message. He was doused in coffee for it. His fellow activist, who refused to give his name, was knocked down, had his sign ripped from his hands and again, doused in coffee.

“He dropped a match on a powder keg that was just trying to continue its time as dust,” said environmental science major Seanan Kenney. “They thought it would be a great place to exercise their First Amendment rights by antagonising many people who already feel vulnerable under this administration.”

The activists arrived around noon, their flaxen banner visible from across campus. The three of them, two men and one woman, positioned themselves in the center of SF State’s quad — a literal crossroads. They didn’t go unnoticed.

Classes had just been let out and the crowd quickly manifested. A shouting match ensued, but turned violent just after 2 p.m.

“Both sides threw swings at each other,” Kenney said. “[One of the activists] got a female student in a headlock and everyone rushed to her defense to get the sign out of his hands so he didn’t have anything to strike anyone with.”

University Police immediately stepped in and escorted one of the activists to an undisclosed location for his safety.

“Having somebody on a campus with a sign like that should be considered hate speech,” said communications major Paige Denholm. “It’s upsetting to see people like this in the world. At the same time, it’s not okay for violence to ensue.”

The scuffle was brief and no one was seriously injured, but the scrap demonstrated if you aren’t progressive, you aren’t welcome.

Not everyone, however, reacted as such.

“For me, America was born on religious freedom. We have to be tolerant of everybody,” said communications major Juan Carlos Hernandez. “I don’t think he deserves stuff like this, but I don’t go along with his beliefs.”