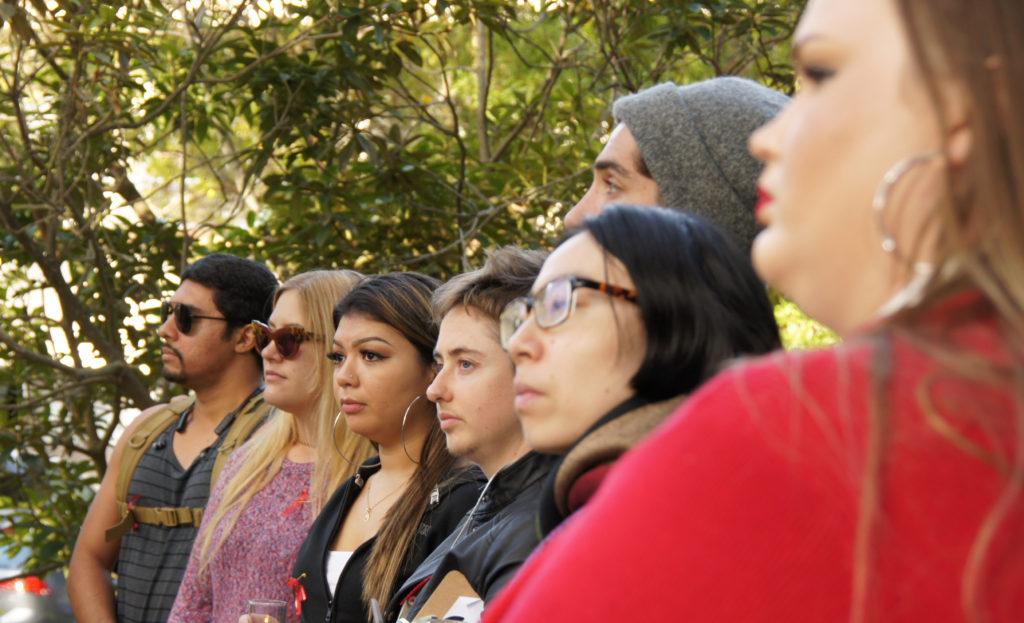 Friday, Dec. 1 marked the 29th annual World AIDS Day, which SF State has taken part in to commemorate those affected by HIV and AIDS.

SF State students and staff took part by holding three events — a screening of the film “We Were Here,” a vigil held in the AIDS Memorial Grove and an educational panel about PrEP and PEP, two prescription drugs for people who are in different stages of HIV.

“The film itself was deeply moving for me,” said Rumaldo Godinez, an anthropology major and the student director of the Queer and Transexual Resource Center. “Being reminded that [the AIDS epidemic] determined a lot of history was super powerful, and that resonated with me.”

About 20 people gathered for the vigil in the AIDS Memorial Grove, located between the gym and Cesar Chavez Student Center. Small candles sitting in glass cups were handed out to each person, and some carried stones they decorated with paint during the film screening session. The candles and stones were placed around a birdbath next to the Tree of Life, a tree planted in the grove last year to honor those affected.

Everyone was invited to simply share a name of someone they lost to the disease or address the crowd with whatever was on their mind. Gerald Solares, a history major who was in his teens during the peak of the epidemic, spoke about a friend who was a victim of AIDS. Solares witnessed how the disease was labeled as a solely-homosexual issue, but he never believed that.

He thinks the key to avoiding catching HIV, and any other STDs, is to be smart about who you have sex with and how you do so. He said the friend he lost left a strong, specific impression on him, and he tries to relay it to younger people as often as he can.

“Use your mind,” Solares said. “Question the person you’re getting to know. And if something doesn’t feel right, there’s nothing wrong with telling them, ‘Thank you, but I’m not interested.’”

There were also people in attendance who didn’t personally know anyone affected by HIV or AIDS. Gabby Cornejo, a pre-nursing major, is one of those people. She described herself as “an ally to the LGBTQ+ community” who wants to help and support any way she can.

Cornejo said her passion for the LGBTQ+ community stems from a friend in high school who is gay. She said he didn’t receive the support he needed, even from his parents.

“There were times when he thought about committing suicide, and that really hurt me,” Cornejo said. “If I was there for him, why can’t I be there for others?”