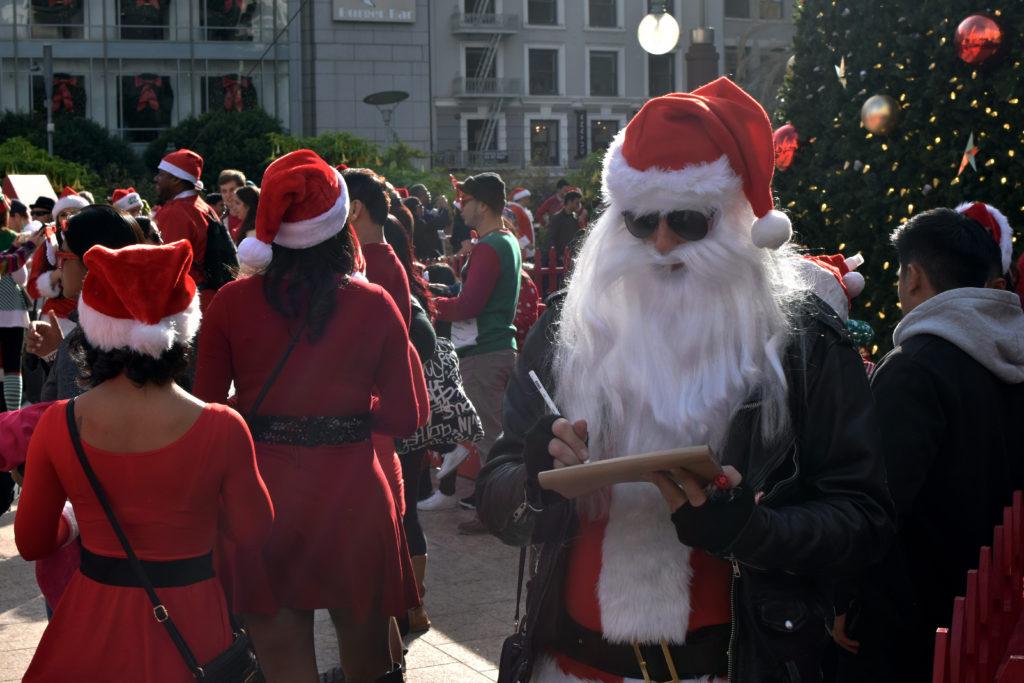 The 2017 San Francisco SantaCon was in full swing by noon after BART trains delivered loads of partygoers throughout the morning. The afternoon of day drinking and Santa worship had only two rules: dress like Santa and bring your own booze.

San Francisco hosted the world’s first SantaCon over two decades ago. In the years since, the idea has spread to countries all over the world including Australia, Colombia, China, Spain and Germany.

On Saturday, Rasta claus pounded his flask as he jammed to reggae music blasting from his Bluetooth speaker. Ten almost identically-dressed men drank Pabst Blue Ribbon with their fake beards loosened so that liquids could easily access their mouths. One guy even stumbled around, without any Santa gear on, repeatedly yelling “Santa!” as dozens of people, completely in character, responded with “ho, ho, ho!”

But not everyone flocked to SantaCon to get wasted in public. Families took selfies in front of the 80-foot-tall Christmas tree; children ran around dressed as elves and reindeer. By day’s end an estimated 5,000 Kris Kringle’s mostly stumbled around in costume chatting with other Santas during the once-a-year opportunity to dress up like old St. Nick.

SF State alumnus Andres Mondieta, who graduated with a kinesiology degree in 2015, rode BART from Daly City to take it easy with his buddies. Sporting a standard red and white Santa suit, equipped with his own naturally grown non-white beard, Mondieta sat in a lounge chair on the outskirts of the party soaking in the Christmas vibes.

When asked if he had seen any stand-out Santa costumes, Mondieta said the bar for out-of-the-ordinary costumes is much higher in San Francisco.

“I haven’t seen anything too nutty, just some skimpy outfits,” he said. “I feel likes it’s hard to evaluate because it’s San Francisco, so I feel like my barometer for craziness is kind of low to begin with. You kind of just expect anything in the city.”

Rock N’ Roll Santa’s real name is Cyrus, and he drove up from Pacifica to attend for his first ever SantaCon.

“It’s a celebration where everybody can peacefully assemble, and be creative and free and have a good time,” said Cyrus, who preferred to only use his first name.

Cyrus stood close to the giant Christmas tree sketching pictures of passers-by in his notebook wearing sunglasses, a hanging black bandana and enough leather to make a young Travolta proud. Earlier in the day, he saw one particular Santa costume that grabbed his attention.

“The craziest, funniest costume I’ve seen was also the most unique: the Santa pope,” he said. “He had horns and feathers coming out of his Santa hat, but also, a Roman Catholic medieval staff with a crucified Santa Claus on it.”

One of Rock’ N Roll Santa’s first sketches was of a man he called “Kris Kringle himself.”
Sitting on some stairs, beside a giant pile of presents, sat a true Santa Claus look-a-like known in the scene as Santa Tom. He wore an authentic Santa outfit, not one from Party City, and he didn’t need to wear a fake white beard because he had his own. In front of Santa Tom stood a line of people – mostly adults – waiting for a chance to take a picture atop Santa’s lap.

Santa Tom, whose real name is Tom DiBell, organized this year’s gathering, and as part of the organizing effort he requested people bring a gift to donate to Toys for Tots. The massive, towering pile of presents above him signaled that his message was well received.

This year’s event was his first time organizing, but his twelfth time attending. DiBell estimated that 8,000 Santa’s showed up this year, many more than the 20 that attended the first event two decades ago. The Facebook event post saw 20,000 people interested and almost 7,000 marked-down as “went.”

Even though more people have been flocking to SantaCon in recent years, Dibell says the vibe has changed drastically. The SantaCon of today, he says, has given the event a bad stigma around town.

“Stark differences I’ve seen include the drunkenness of some in the crowd,” Dibell said. “People had to be reminded ‘hey folks this about being Santa, not being drunk and pissing a whole bunch of people off.’”

“We just want to be Santas. That’s all we want to do and we want to party-hardy for one day. We hope that people can join us and have a great time,” he continued.