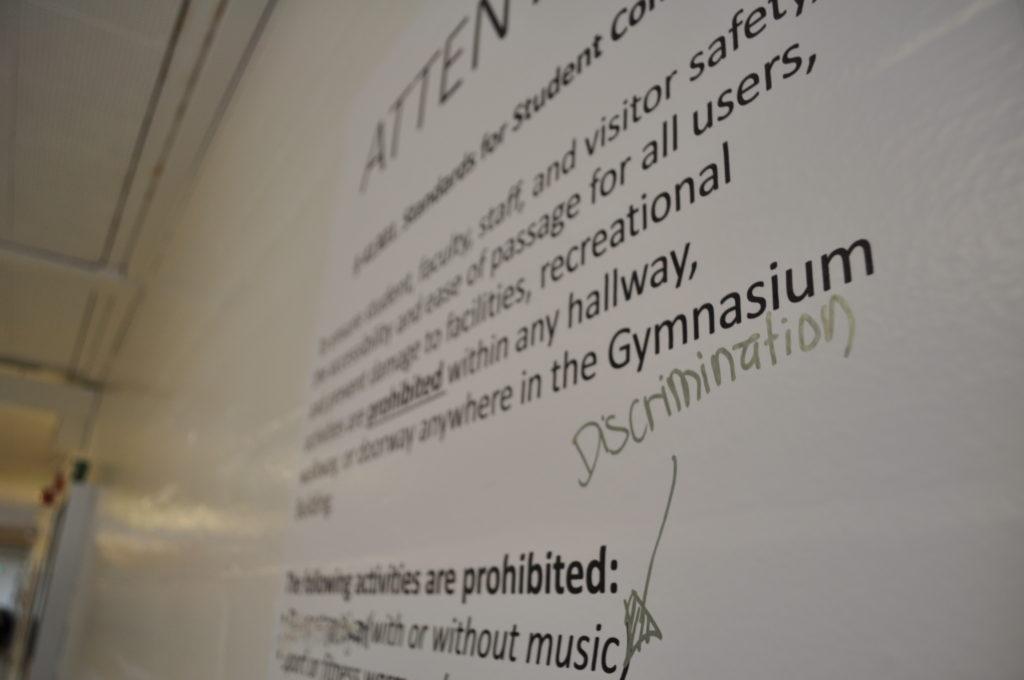 Monday morning was going to be any regular start of the week for Andrew Sanders, fourth year art major at SF State. He’d go to work, then class and after he’d break dance with his crew in the widest hallway of the gymnasium.

Instead, on Dec. 4, 2017 he’d find out that there would be no dancing in the halls that day. To his utter surprise, giant signs containing a section code of conduct, which stated no sports, physical activities, theater activities, dancing or singing allowed in the hallways, along with separate signs which stated “No Dancing” were posted on every wall.

“I know that this has gone on for a very long time; and I know that a lot students, their identity is focused on this spot in this building,” Dr. Kern, Kinesiology Department Chair and Professor said. “I feel badly that I’m the one that has to bring this to light if you will, but it is something that needs to be addressed.”

In a meeting with Kern, the breakers made it clear that there were no official formal warnings presented to them and the signs, which specifically said “No Dancing,” came off as an inappropriate attack. Breakers and other dancers used that hall for almost 20 years; up until now there has been no mention of a ban to them. The change, for them, literally happened overnight.

“It was really uncalled for and it felt like an attack, not only to us but to the dance department, to the other organizations who have used the hallway over the years as practices for their shows or even for finals,” said Kevin Torion, a member of the breakers who used this space for four years. He describes the ban as Footloose-esque.

Although the team had no official warning about the ban, Russell Wong, member of the breakers, spoke about an altercation with former athletic director, Charles Guthrie, which was anything but respectful.

“They claimed they had talked to us, but it was just one faculty member,” said Wong. “The first thing he said was shouting to turn the music down, and he yelled at us saying we shouldn’t be dancing in the hallways anymore … We could have reached a compromise,”

Given the chance to complete this process differently, Kern said she would have talked to the dancers herself to explain that the act of prohibiting forms of expression in the halls was not a personal attack. Coming from a dance background herself, she said understands the boys’ need for a space to break.

Dr. Kern suggested the breakers reserve a room in Mashouf Wellness Center which is open for a few hours a day, however, the B-boys face availability issues there. The space, which is used for various yoga and work out classes, does not have a reservation system; if the boys want to practice, they have limited time and space if other students are using it to work out, stretch or dance. Not to mention, they have alumni and non-SF State students in their club, who would have to pay a fee for entry.

Sanders, who joined the team this semester, said he was inspired by seeing the boys dance in the halls. If it wasn’t for the B-boys’ occupation of the space, Sanders would have never found his on campus outlet. He’s practiced everyday with them since.

“That’s our main draw, the main reason why everyone loves the hallway is because everyone finds themselves walking through it at one point,” Sanders said. “People just see us, and even if they don’t have any background in dance, they say ‘hey this is awesome.’”

He feels SF State doesn’t recognize breaking as a sport because their technique isn’t described as a solid form although they’ve represented the school at United Collegiate Breaking League as far back as 2006. “What does it matter to SFSU that they have really good break dancers if there is no break dancing program or anything drawing others to school, no economic benefit,” Sanders said.

Sanders along with a few other breakers believes that the administration enacted this change at the end of the semester, so momentum for their movement to regain the hallway would slow. Not only was the lack of communication seen as a below the belt blow to them, but so was the timing: during finals and right before break.

Kinesiology professor, Nicole Bolter, who teaches in the gymnasium, said she too was never involved in any meeting pertaining to the signs prior to posting and was just as surprised as the rest of the students. She also said the presence of the young men never bothered her.

“It’s only been a week or so but it is weird to not hear their music or see them in the hallways.

This isn’t the first time break dancers are have been pushed out of their practice space in a college. According to SFSU breakers member, Tony LuFrano, in 2013 University of California Berkeley made moves to kick their breakers out after one complaint being filed.

“The school didn’t really want us there in the first place, but they just didn’t have a reason or a legitimate way of giving us the boot up until [the complaint was filed],” LuFrano said about Berkeley’s actions towards his old crew. “So that kind of gave them an excuse to kick us out.”

It took the crew at UC Berkeley a long time to appeal to the school. Dancers from Taipei and Japan reached out to show their support for the breakers and they eventually were granted a new area to practice. However, those B-boys were formally banned from their original stomping grounds.

One word to describe the Kinesiology Department’s act of oppression from Sanders is “whack.” He said it’s a contradiction that SF State is known for their liberalism and creativity, but the administration has no problem removing multiple forms of expression from their hallways. He believes it’s only another chance for students to fight back, like in the past.

“As a school, most of the liberal reform here is pushed by the students in reaction to what’s being done by the faculty,” Sanders said. “It’s us fighting for our keep, and I think that’s what makes us such a great college.”

The lack of communication and swiftness of the signposting left the B-boys no time to find another space immediately. For now, they will find any nook of the school to dance in, letting nothing stop them. On Thursday, Dec 7. 2017, outside of the gym, the B-boys laid out two linoleum mats over each other to acquire a soft ground, instead of the textured concrete, to practice their technique.

“My main concern is that I want those students to know that we support them and together we need to find a good solution for them to continue breakdancing in a space that is meaningful and useful for them,” Professor Bolter said. “From my observations, they work really hard at their dancing and do amazing things that I could never do; It’s really impressive to watch and I am proud that they are part of SFSU.”

On the mats outside, their energy emanated from their bodies as they flared their legs through the air and synchronized their movements to funky heavy based music.