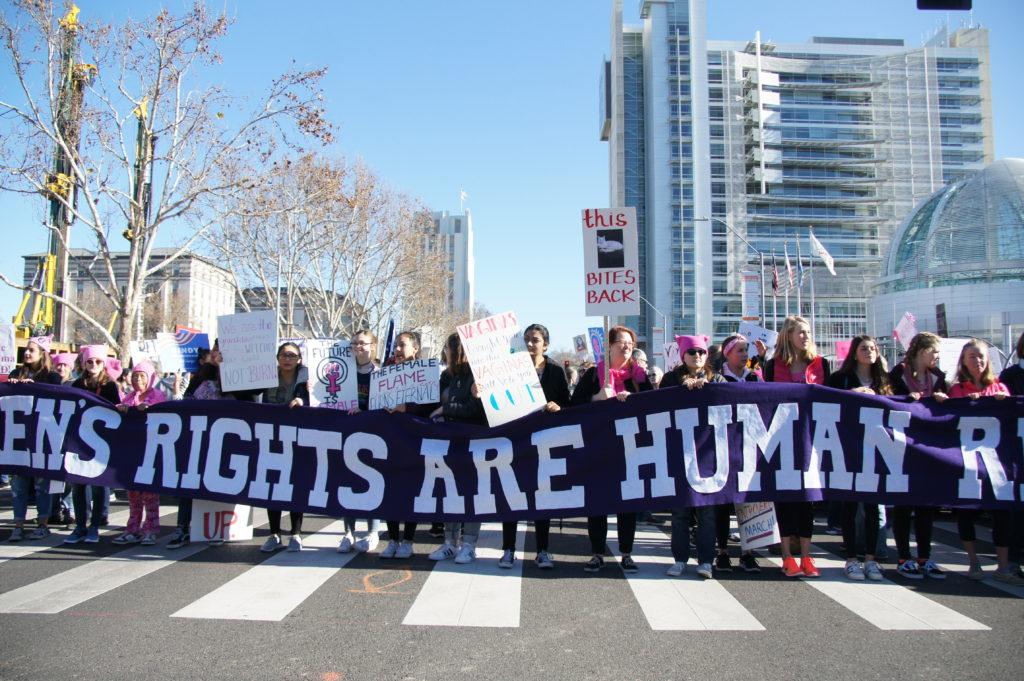 “Hear our vote,” was the chant heard throughout the day as thousands of participants gathered at the Women’s March and rally in San Francisco. The march on Saturday, Jan. 20 aimed to encourage voters to elect more women into office in the 2018 midterm elections.

Attendees marched from City Hall to The Embarcadero waving signs in the hopes of raising awareness for candidates and allies fighting for women’s rights including housing, homelessness and sexual assault.

“It’s time … to take our power to the polls,” said Aimee Allison, the president of Democracy in Color, as she addressed the crowd in front of City Hall.

The march also attracted many college students from across the country.

“I’m here to support women because I think it’s really important and everything going on right now is very scary with Trump and stuff,” said Favron, who is originally from Canada.

Although many college students were in attendance, historically students have some of the lowest voter turnout rates.

According to The Center for Information & Research on Civic Learning and Engagement (CIRCLE), only 21.3 percent of youth, ages 18 to 29, voted in the 2014 midterm elections.

“I think it’s really hard … and a lot of [students] are out of state and I think there should be a bigger push to fill out absentee voters and your applications and make sure you get to the polls, it’s really hard for students which is why I think we’re often underrepresented,” said Childs.

“I think it should be talked about more to actually get it done and actually register,“ said Lindborg. “Everyone talks but it doesn’t matter unless you actually vote.”

Marches and rallies, such as the Women’s March, can be effective in achieving their goals if organized properly, according to Kathy Emery a political science lecturer at SF State.

“There are two effective goals of a march regardless of political climate or historical moment: [one] to let out steam, to vent, so the movement  remains nonviolent … and [two] to attract people to an issue, then get their contact information for future organizing,” said Emery.

A successful march, according to Emery, recruits new members to an organization and then has them complete tasks such as community organizing during elections.

Various “Hear Our Vote” Women’s Marches were held across the country from New York to Oakland.

“It’s really empowering, it’s nice to see everyone come together as a community [because] often times we are so separate doing our own things in life, and it’s nice to know other people are as frustrated as we are,” said Childs.

The deadline to register to vote for California’s June 5 primary is May 21. For more information on voting as a student visit CampusVoteProject.org.

Correction January 21, 2018: An earlier version of the article misspelled the name of the political science lecturer at SF State. Her name is Kathy Emery, not Kathy Every.