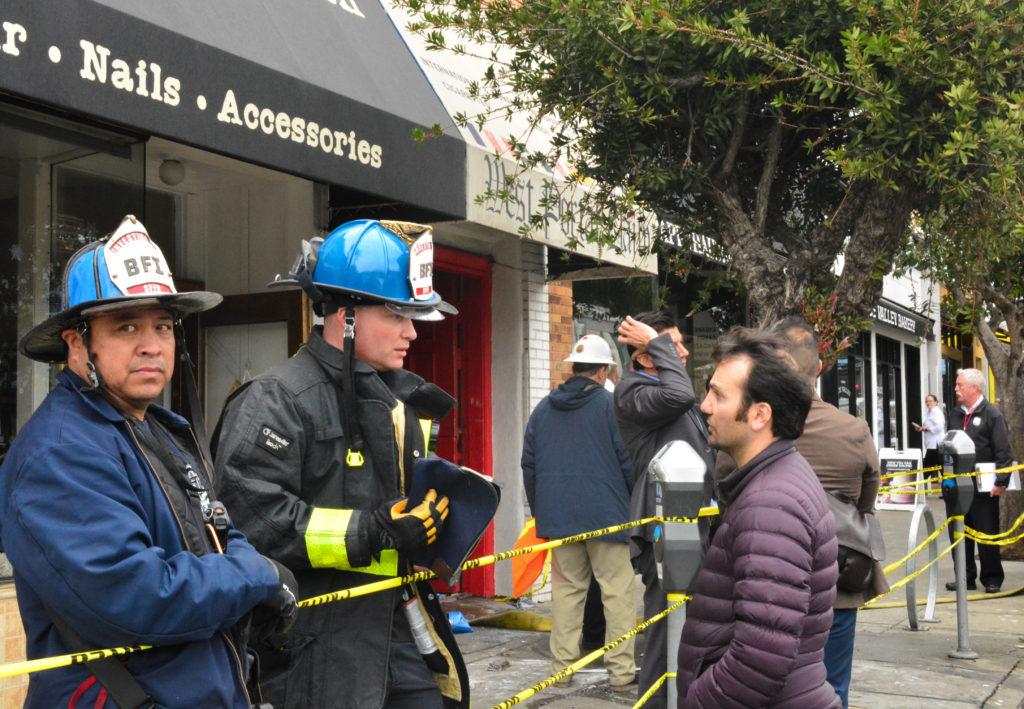 Business owner of the West Portal Daily speaking to SFFD about the damages that occurred to his business on Wednesday, January 24th, 2018 in San Francisco. Bryan Ramirez/GoldeGateXpress

Tuesday night at approximately 10:40 p.m., a three-alarm fire broke out at 32 West Portal Ave. and continued to spread to two neighboring businesses, according to an official press release from the Mayor’s office this afternoon.

Fire engines were dispatched at 10:42 p.m. and arrived at the scene no later than five minutes later.

The affected businesses include Papenhausen Hardware, thought to be the origin of the fire, the West Portal Daily, Sloane Square Beauty Salon and Noe Valley Bakery.

Michael Gonzales, husband of the owner of Sloane Square Beauty Salon, said the eagerness to reopen is apparent, but the prospect of doing so is months away.

When asked what he will do now, he says he hopes to rebuild the shop as soon as possible using insurance money.

The fire is suspected to have originated in the back of the hardware store, where it continued to spread to West Portal Daily and then to the beauty salon.

During the attempt to control the flames, firefighters were forced to evacuate the interior as the building’s roof began to collapse.

Joanne Hayes-White, Chief of the San Francisco Fire Department said that the cause and exact origin of the fire are still under investigation.

“At about 10:45 p.m. we did have our arson team out which is a combined SF Police Department and SFFD unit. It is basically our bureau of fire investigation. So no determinant has been made whether it be accidental, suspicious,” Hayes-White said. “That’s all the work they are doing at this time, to collect evidence and take a look and see exactly what happened.”

She said based on the findings of the Director of Department Building Inspection Tom C. Hui, that the affected buildings need to be evaluated for structural integrity before reopening, but as of now are inhabitable. Hayes-White and Hui both suspect it will be a long time before the affected businesses will be reopened.

“There is water damage, extensive damage from the fire,” Hui said. “The engineers will come in and assess the situation, and we will work with them to expedite the rebuild and permit.”

He hopes to have an engineer draft a report within 72 hours to start the process of rebuilding.

The Small Disaster Relief Fund will give access to $10,000 in funds immediately, providing businesses with capital that can assist them in the rebuilding process in lieu of insurance money that can take weeks to obtain.

Correction January 25, 2018: An earlier headline stated the fire is being investigated as arson. Arson is a cause determined through the course of investigation. The San Francisco Fire Department has not yet determined the cause of the fire.