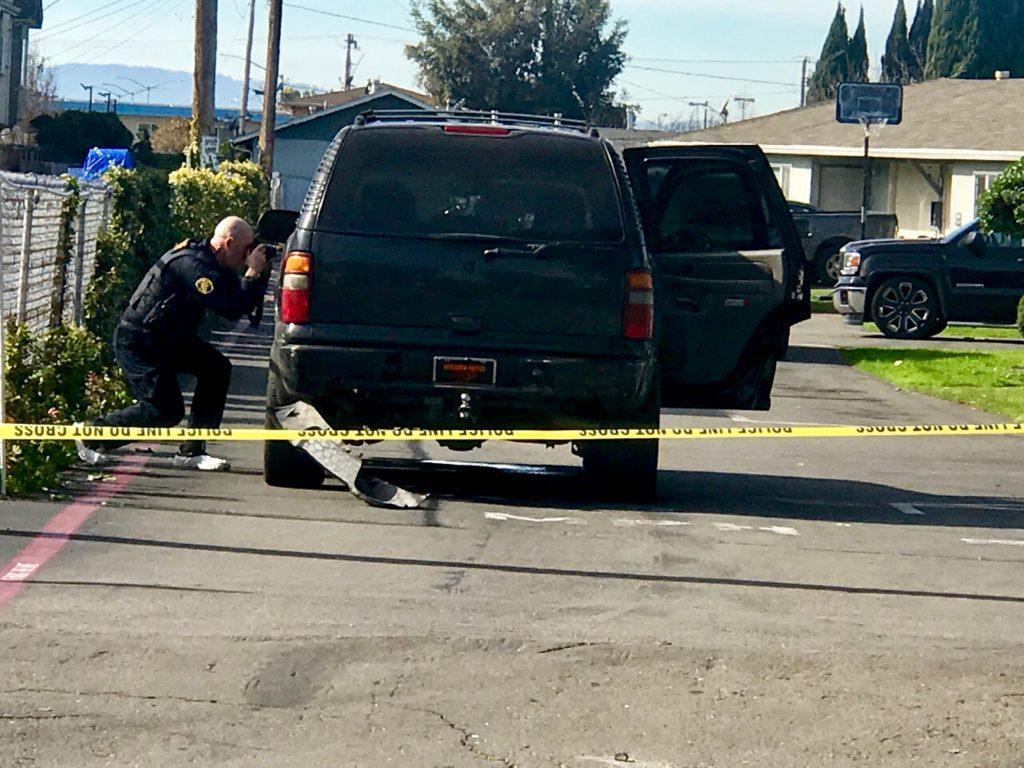 Deputies are still investigating the scene where a deputy opened fired to a suspect who had reportedly stolen an SUV and fled the scene. Hayward, February 1,2018. (Marisol Cabrera/Golden Gate X-Press)

A Hayward police officer opened fire after a male, suspected of stealing a black SUV, rammed into the officer.

The suspect fled on foot, and it is unclear if he was injured. The deputy was left with minor injuries, according to Alameda Sheriff’s spokesman Sergeant R. Kelly. The incident occurred at Park Royale apartments on Royal Avenue Thursday morning.

The suspect is a Hispanic male in his 20s. Police are investigating surveillance footage and are asking residents to stay inside their homes as the suspect remains on the loose, according to Sergeant Kelly. A deputy on a motorcycle tried to stop the SUV for speeding on West A Street and Arbor Avenue.

The suspect then turned on to Royal Avenue and forcefully dragged the deputy behind the car for roughly 20 feet. The deputy had originally stopped the suspect for a speeding violation and the vehicle was not returned stolen at the time that officer checked the license plate until later on, Sgt. Kelly affirmed.

Deputies are working with Hayward Police and highway patrol. Sgt. Kelly said that police are conducting a door-to-door search for the suspect.

Police activity around Royal Sunset High School and Preschool, located in Royal Avenue has  been on lockdown.

Park Royale apartment resident Teresa Hernandez said she did not hear gunshots but was terrified when she heard people coming out and saw the caution tape across her street.

“We know that the guy came from the freeway and he ended up here. And when [police] were looking for him the truck already had gunshots,” said Hernandez. “They’re searching residents cars and houses.”

Some residents were scared and left wondering what had occurred but were not surprised as multiple shootings have occurred in the area.

The shooting occurred a couple of feet away from the Royal Market liquor store which was the scene of a December 2016 robbery and shooting.