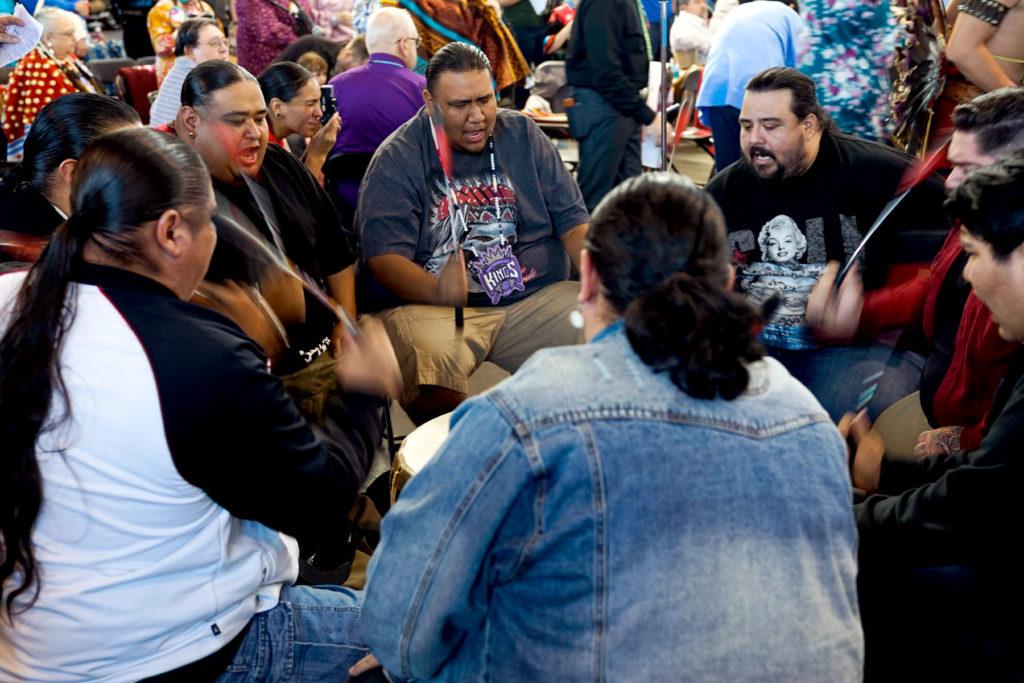 Groups like First Peoples, particularly those who identify as Two-Spirit, have long been marginalized and underrepresented in politics and media. But organizations like Bay Area American Indian Two Two-Spirits (BAAITS) seek to fight against this disenfranchisement.

Last Saturday, BAAITS sponsored the seventh annual powwow in support of Two-Spirit members of their community.

California Consortium for Urban Indian Health (CCUIH) and San Francisco Public Library were two of the organizations at the event, helping to bolster the institutional support.

“We’re here to offer support to the indigenous community and help make the powwow,” said SF State freshman Barakah Aly, an urban studies and planning major. “We’re teaching about the San Francisco Public Library and letting anyone create their own buttons.”

Andrew Jolivette, an American Indian Studies professor at SF State, has worked with BAAITS on numerous projects and attended the potluck prior to the powwow. He spoke about the importance of BAAITS and similar organization for severely marginalized communities like Two-Spirits and LGBTQIA First People.

“This is probably one of the most marginalized populations … one could think of, particularly when you’re talking about people who identify as Two-Spirit or transgender,” Jolivette said. “I can even tell you just from the research I did on this book, those two groups had the highest rates of sexual violence and that was shown as responsible for increased risk for HIV.”

April McGill, a lecturer from the American Indian Studies (AIS) department at SF State and director of community projects for CCUIH, was also present at the powwow providing information about the organization and sharing more about the free rapid testing for HIV-C and AIDS which was also happening at the event.

“We work on policy advocacy and California has the most urban … [native] clinics,” said McGill. “We have a new program called Getting Real About Stigma Prevention [GRASP] to bring attention to American [native] urban communities about human papillomavirus (HPV) and prevention and breaking stigma in urban [native] communities.”

Jolivette deals with issues of disillusionment and stigma in his book “Indian Blood: HIV and Colonial Trauma in San Francisco’s Two-Spirit Community” published in 2016.

“One of the concepts we talk about in the book is Two-Spirit cultural disillusion. The respect and roles that Two-Spirit people play traditionally … were actually in the middle of ceremony,” Jolivette said. The other concept is this idea of post-traumatic invasion syndrome like people talk about PTSD right? I think for Native communities sometimes we’ve taken on this same ideas of people who’ve colonized native communities and that there’s something wrong with being Two-Spirit or transgender or LGBT.”

Two of Jolivette’s examples of this were the Navajo and Cherokee tribes having same-sex marriage bans at one point.

The dance circle behind the vendors was the focal point of the event, “They’ll be performing the chicken dance, a grass dance, hoop dances, and a northern and southern traditional style dance,” said Debra Smith, a volunteer for BAAITS. “This is all for Two-Spirit but also for anyone who wants to enjoy the Powwow.”

BAAITS Chairman Roger Kuhn enjoyed the event, “It’s been incredible, this was our most successful powwow ever. You won’t want to miss next year’s Powwow it will be our 20th anniversary.”

Jolivette mentioned the 20th anniversary as he explained the continued importance of BAAITS and similar organizations. “I think by just creating community space … events like community potluck where everybody brought food. People who aren’t Two-Spirit or even LGBT identified who were coming and supporting this, honoring elders, honoring youth at these events.”