Gators pull off a close home victory against Sonoma State 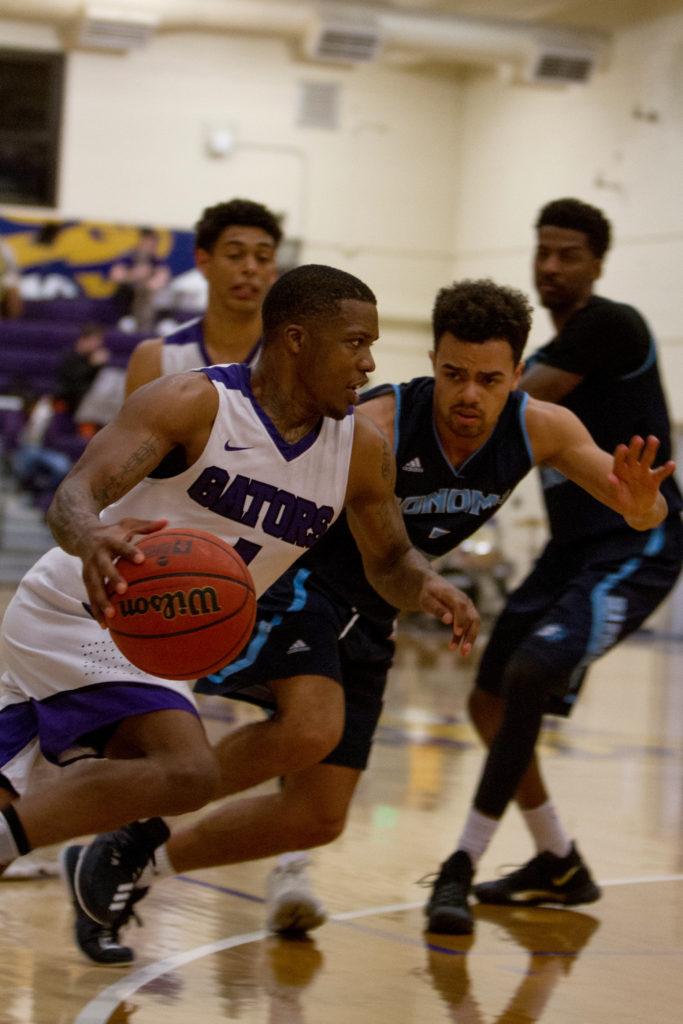 The SF State men’s basketball team was able to avoid blowing a lead late in the game and instead came away with a hard-earned victory over Sonoma State at The Swamp on Saturday, Feb. 10.

The Gators started the game playing with tenacious defense, holding the Seawolves without a field goal for the first five minutes. That five-minute span stood as a microcosm of what this Gators defense is capable of when everything comes together.

“When we are engaged and communicating and rotating at a high level we are a very difficult team to score on,” said head coach Vince Inglima. “We have a lot of very good individual defenders. We don’t always defend well together but when we do, we are an elite-level defense.”

Despite the great defense, the game remained close for most of the first half, until around the six-minute mark. That is when the Gators started to really pull away. The half was capped off by a thunderous alley-oop dunk by senior forward Brantley Bynum with a minute left, pushing the lead to 40-24. The Gators went into the break with a commanding 43-29 lead.

The second half started off mostly the same with the home team keeping the visitors at bay with a commanding lead. Senior guard Warren Jackson paced the team in the second half, scoring 14 of his 21 points after the break. Everything was going well for the Gators as it looked like they would coast to another double-digit victory.

“We were at a pivotal point where one or two baskets and we could have blown them out,” said Inglima.

However, things changed late in the game as Sonoma State was able to rally back and make the game competitive in the closing minutes.

“We had this problem earlier in the season when we played Dominguez Hills where we just kind of lost focus,” Junior center Ryne Williams said. “We got up by a lot, we kind of let up, and we were having a good time, laughing. And then they started climbing back in.”

What was once a 19 point lead was cut down to seven after a late 8-0 run by the visitors with 30 seconds left in the game. The Seawolves ultimately closed the gap to pull within four points of the Gators in the closing seconds.

“It’s February, it’s late in the year and a win is a win,” said Inglima. “Everybody’s battling hard, Sonoma’s playing really hard and competing to try and make the conference tournament. Nobody’s going to roll over for us. Nothing is given in the CCAA.”

Despite the late collapse, the Gators were able to pull off their second win in a row. With only four games left in the regular season, the team hopes to keep the momentum rolling during the final stretch.

“Its big, we have a really tough schedule,” said Williams. “Next week we’re headed down to LA and we play Pomona and San Bernardino. Pomona’s number one right now and San Bernardino is on a hot streak. They just beat San Marcos, who is a top team in the league, so we’re going to have to play a full 40 minutes to beat both teams. But I’m excited, we’re playing good. We’re on a roll.”

The Gator’s will look to keep the ball rolling as they face Cal State San Bernardino at the Coussoulis Arena on Friday, February 16.